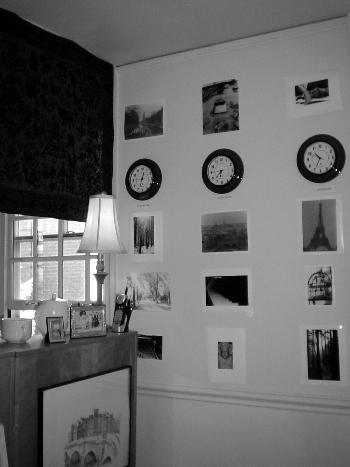 When Elana C. Rome ’07 has anyone over to her room in Mower, she asks “Have you seen his room?”
By C.e. Jampel

When Elana C. Rome ’07 has anyone over to her room in Mower, she asks “Have you seen his room?”

Her downstairs neighbor, Eric P.C. Phelan ’07, lives luxuriously in the common room of his triple. After drawing the short straw, Phelan bettered his roommates by maximizing his resources, which he describes as “an empty space and total reign over it.”

Phelan’s area of the common room is set apart from the entrance by bookcases and a stylish chair and features a striking collection of clocks representing three major world cities: New York, London and Bombay. Phelan’s original time zone display in his room at home included nine time zones, but he says that “trying to sleep with nine clocks ticking can get annoying.”

Phelan—who has been to New York and London, but not Bombay—says he included the central Asian time zone for geometric reasons. “If I had used Berlin, where I have been, the hands would have been too similar to the hands on the London clock,” he explains.

Applying his aesthetic eye and artistic temperament, which he developed from his painter mother, Phelan also pays attention to how lighting enhances his home environment. He used to have a lighted topiary for the fireplace that “died tragically,” but maintains a pleasant atmosphere with lamps. “At night I have soft lights and it’s cozy like a bistro.”

Creating such a refined living environment in a college dorm is not without its challenges, however. “Sometimes when my roommates come in late they automatically put on the overhead lights and it looks like a hospital,” Phelan rues. “I don’t let [them] sit on the bed unless [they] re-fluff it.”

Phelan’s fellow Mower residents also seek his expertise in creating visually appealing environments. Marisa H. Flavin ’07 commissioned some artwork for above her fireplace. “It’s gorgeous. It adds color to the room. Whenever we have decorating questions, Eric is the one we go to,” she says.