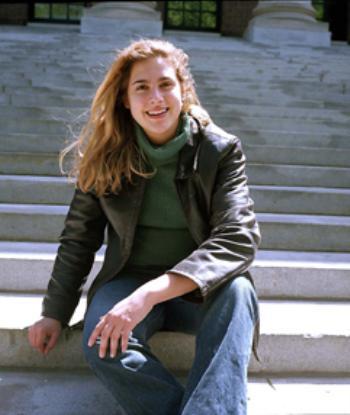 The Long and the Short of It

Walking through the Yard is a great chance to see people I haven’t seen all summer long. Except when they
By Nikki Usher

Walking through the Yard is a great chance to see people I haven’t seen  all summer long. Except when they ignore me. I’ll wave hello, even say hi and the person’s name, but there won’t be a single glance in my direction.

I don’t think I’ve developed some sort of hideous physical deformity or am contagious with something like the Bubonic plague. Instead, I’m beginning to realize that no one pays any attention to me because they don’t recognize me.

I haven’t drastically changed the way I dress or gained or lost any weight. No, I’ve just cut my hair. For the first time in as long as I can remember, I can’t pull my hair back into a ponytail. I can’t even use barrettes. Now I’ve got the same hairstyle as my little brother. Boy short. It’s so short that a rushed airplane security guard took one glance and thought I was a guy.

I have to practically jump in front of someone to get that person to notice me. And then they say, “Wow, Nikki, I didn’t recognize you with that haircut.”

My Spanish teacher didn’t realize it was me when I knocked on her door. At least this is somewhat understandable. After all, she is a busy professor with hundreds of students. But when people at The Crimson—a place where I spend far too much time—had to do a double-take, I realized cutting my hair was tantamount to a serious makeover.

The curly light-brown locks came off during senior week last spring, when most people weren’t around to see the change. There were two stages. The first time I tried to get it all chopped off, the hairdresser told me she’d still keep me looking “feminine.” Before she started with the scissors, my thick hair was down to the middle of my back. I swear I could hear a soft thud as the stylist’s sharp scissors gently sliced off one lock at a time. As I watched the pile of hair on the floor continue to grow, I was seized with a temporary paranoia that mirrors would start to crack when I looked in them.

The hairstylist left me with a cute 1920s bob. Anyone who knows me understands that cute has never been my style. I wasn’t just looking for a short haircut. I wanted my hair to make a statement for me so I wouldn’t have to explain anything to anyone.

More hair had to come off. This time, I instructed the  pink-haired stylist at the beauty shop in the Garage, “I don’t care if you cut it short and it looks like a boy. That’s kind of the point.”

I’ve been craving short hair for as long as I can remember. But I only had the guts to get the haircut as I was coming out of the closet. Now clearly, just because a girl has short hair doesn’t mean she’s gay. But if she suddenly chops it all off, joins the rugby team and quits going home with boys when she’s drunk, chances are she’s trying to tell people something. At least in my experience.

It would be silly to definitively link lesbians or heterosexuals with a particular look. It’s not like you could just scan a room and be able to pick out all the lesbians just by looking at them. I’ve been gay all my life and I don’t think anyone ever looked at me and said, “You’re gay.” Until now.

Perhaps it’s a self-perpetuated stereotype or one enforced by mass media, but I feel like people automatically assume that a woman with a boy’s hair cut and whose clothes are more Dad’s closet than Banana Republic is a lesbian.

When I’d walk into Diesel Cafe, a coffee shop frequented by lesbians in Davis Square, it seemed like I was surrounded by women who I could immediately tell were gay. They all had the same boyish look—in my mind, this rejection of traditional assumptions of gender performance was a way to openly declare they were not heterosexual.

As I ventured into the world of gay nightlife, I learned a whole new vocabulary of terms that applied to lesbians—a kind of short-hand stereotyping that made it easier to categorize the women I was meeting at bars. I gradually came to understand the general looks associated with the words “butch,” “femmes,” “diesel dyke,” “baby dyke“ or “lipstick lesbians” and others as mechanisms for self-definition and description. From within the gay community as well, stereotypes based on dress became a way to declare identity.

For most of my time in college, being gay was a deep-dark secret my Republican self was determined to exorcise. Though I’m from a liberal suburb, I was raised in a household where attraction to the same sex is considered unnatural. It took a drunken conversation during reading period last winter and a 21st birthday promise to myself to initiate my coming out process.

Telling the people close to me that I was gay was both terrifying and liberating—I feared being ostracized, but relished finally being honest with the people I cared about. Still, I felt trapped in a world of heterosexual expectations—because I didn’t “look” like the stereotype of what people think of when they think “lesbian,” people operated under the general assumption that I was straight.

So chopping off my hair became a declaration of my sexuality. I wanted people to be able to take one look at me and, from my clothes and my hair, be able to deduce I’m gay—and along with it, get the hint that I found talking about the cute guy across the hall rather boring.

Sure, cutting my hair may be playing into stereotypes, but ironically, I believe I am manipulating these assumptions as a mechanism for liberation.

I’ve pulled off the look so well that my parents took one look at me when they met me for Class Day and said, “Why’d you cut your hair like that? You’re not gay, are you?”

Having short hair and dressing like my little brother has also been a way to force myself to become comfortable with my own sexuality. Every time I look into the mirror and see my reflection, I am reminded that it’s time to become comfortable with myself. Each time someone tells me, “Well, you’ve gone through a big transition,” or “You’re in a super gay phase,” I am reminded that appearance, for better or for worse, is firmly entrenched in our assumptions about identity. And I’m working on becoming okay with mine.

Nikki B. Usher ’03-’04, a former Crimson executive, is a history concentrator living in Pforzheimer House.