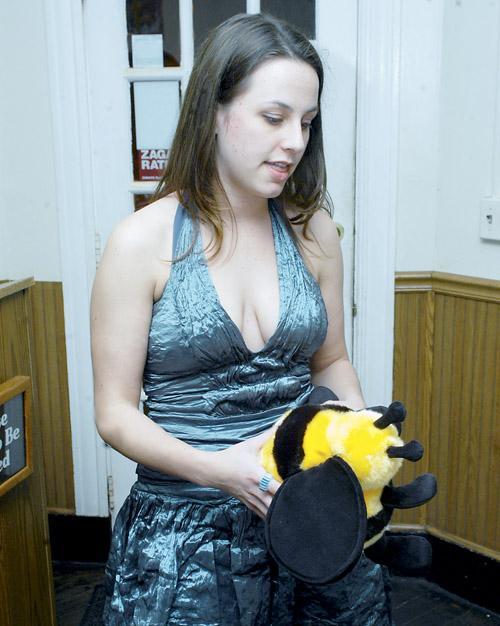 Alicia Menendez ’05 is a feminist, a final club president and a controversial figure on campus. But to four-year-old Isabel
By Veronique E. Hyland

Alicia Menendez ’05 is a feminist, a final club president and a controversial figure on campus. But to four-year-old Isabel Ros, she’s just the babysitter.

It’s three o’clock on a damp Friday afternoon, and Menendez is urging Ros to change from her green T-strap shoes to her pink galoshes before the two venture out into the rain. Dressed down in maroon Juicy sweatpants, a cable-knit sweater and a puffy black jacket, Menendez seems unfazed by the downpour. “Umbrellas are for slackers,” she says.

As Isabel puddle-jumps her way across the street, Menendez talks frankly about her history in the finals club scene. When she first joined the Bee, its reputation was of “a bunch of pearl-wearing Charlotte Yorks, and I’m this ethnically ambiguous feminist who wears sweatpants all the time,” she observes, laughing. Menendez says she joined the group to change that stereotype. As the president of the organization, she says she has striven to make the club more racially, ethnically and economically diverse. She is also involved in the search for a Bee building. Currently, the club holds meetings at Starbucks, which they call “the hive.”

Menendez’s unconventional thesis in Women’s Studies takes on this question of social space, using interviews with both female and male students to argue that the final club scene has been good for women at Harvard. Yet Menendez expresses a hint of disenchantment with the scene. “You can be into the scene and at the same time, as a female senior, be incredibly frustrated that you’re knocking on a basement door on a Saturday night,” she says.

Blunt observations like this are stock in trade for Menendez. Although she aspires to be a public figure, she can be disarmingly transparent. For one thing, she is very upfront about her ambitions.

Her father, Rep. Robert Menendez D-N.J., is the first Hispanic ever to head the Democratic caucus, and has been in the House since his daughter was nine. On Take Your Daughter to Work Day she went to the House floor. Her parents’ divorce was announced in a press release. Still, she is unfazed about the drawbacks of a political career. “I know what I’m getting into,” she says.

She has honed her political skills at Harvard by running Rohit Chopra ’04’s campaign for Undergraduate Council President and helping to run Tracy Ty Moore ’06’s campaign this year.

“She really could sell a pork chop to a rabbi,” says Chopra, who credits much of his campaign’s success to Menendez.

The flipside of this sexual forthrightness is her concern about how she will be perceived when she enters the socially conservative world of politics. She is worried that people will dismiss her. “‘She went to Harvard, yeah, but she studied women,’” she says in a mock jeer. Menendez is so conscious of her effect on people that she even makes a gesture toward acknowledging that she tends to polarize them. “I know myself and I know the way people perceive me well enough to know the effect of the awkward juxtapositions.” She, however, is comfortable with her own idiosyncracies. “I think I have a tremendous fear of falling into some sort of pattern,” she confesses.

When she reaches Isabel’s house, Menendez serves Isabel and her two-year-old brother Augustine a dinner of frozen pizza and carrots. As her young charges pick at their meal, she talks about her desire to have children.

“I do feel that women of our generation have to make a choice [between career and family],” she says. “The problem for me is, I really want to have a family. If I were going to have kids, I would have a football team’s worth of kids.”

Menendez’s short-term plans involve working on John Corzine’s gubernatorial campaign and on a Senate campaign in the spring—jobs she hopes will help her figure out whether or not politics is her true calling.

Menendez leads Isabel to a shelf of children’s books in the living room, picking up one of her childhood favorites, How to Behave and Why by Munro Leaf. Sitting on the wood floor, with Augustine on her lap, she begins to read in a clear, confident voice: “This is a book about how to behave, and it doesn’t matter whether you are a boy or a girl, a man or a woman—the rules are all the same.”