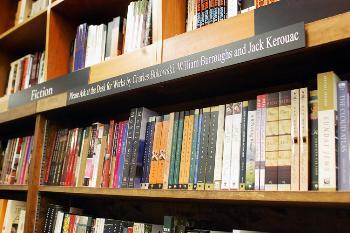 A sign at Harvard Book Store directs readers to ask the front desk for works by Jack Kerouac, Charles Bukowski and William S. Burroughs, whose books have been disappearing from the shelves.
Advertisement
Advertisement

On the Road but Not On the Shelf

Look under “K” in the fiction section at the Harvard Book Store, and while you’ll find an array of selections
By Stewart H. Hauser

Look under “K” in the fiction section at the Harvard Book Store, and while you’ll find an array of selections by Franz Kafka, Stephen King and Rudyard Kipling, the works of Beat generation writer Jack Kerouac are conspicuously absent.

Direct your gaze a little higher, and you’ll see a sign directing customers to ask at the desk for works by Kerouac and his contemporaries Charles Bukowski and William S. Burroughs.

An unusually high number of books by these three authors have been shoplifted from the store, prompting management to remove them from the shelves several months ago and place them behind the counter.

“We would often find that if a customer came in and asked for something by one of these authors, we’d go back and the two copies of one title that we were supposed to have weren’t there,” says manager Mark Lamphier.

Lamphier says that the shoplifting was enough of a problem to implement the policy, though the raw numbers of stolen copies are not overwhelming.

“It’s not like we’re missing 20 and 30 and 60 and 80 copies a year,” he said. “It’s one here, one there, and one somewhere else. It’s just that those authors are particularly identifiable.”

Kerouac’s On the Road, written in the early 1950s, brought the author instant fame and helped spark the Beat movement. Beatniks, as followers were sometimes called, were often associated with their rejection of conventional standards and their anti-establishment views, which most appealed to the frustrated youth.

Lamphier says, “These are authors who are seen, for one degree or another, as rebellious, as iconoclastic, and that appeals a lot to some younger readers.”

Whether the iconoclasm of the beat writers is consistent with shoplifting is a different matter. Lamphier notes that the store sells plenty of other books that are considered to be anti-establishment, but that none of these—not even Abbie Hoffman’s Steal This Book—are shoplifted as frequently as the works of Bukowski, Burroughs and Kerouac.

The Coop in Harvard Square has not noticed a disproportionate shoplifting rate among these authors, according to Frances DiBisceglia, floor manager of the book department. DiBisceglia cited music books as the most shoplifted items in the store. She also confessed, “Shoplifting is a potentially bigger problem than we’re willing to admit. It’s an easy store to shoplift from because there are so many entrances and exits.”