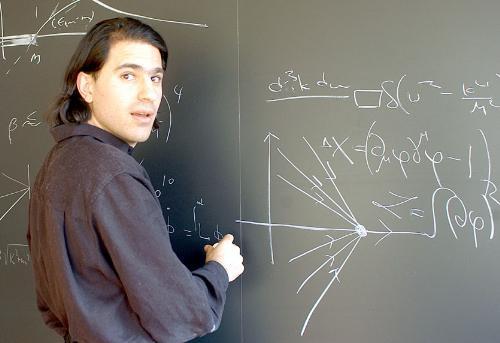 Professor of Physics Nima Arkani-Hamed is only 32 years old and already making waves with his innovative approach to string theory.
Advertisement
Advertisement

Pen and Paper Revolutionaries: The Wonder-Child Who Plays With String

Thirty-two-year-old Nima Arkani-Hamed, wonder-child of the physics world, noted string theorist, thinker in 11 dimensions, says the only thing he
By Humberto Duarte

Thirty-two-year-old Nima Arkani-Hamed, wonder-child of the physics world, noted string theorist, thinker in 11 dimensions, says the only thing he knows for sure about string theory is that “it’s obviously not a theory of strings.”

But don’t let Arkani-Hamed’s modesty, youth or the trendy cappuccino machine in his office fool you. Eight of Arkani-Hamed’s major papers have been cited (by one count) 980 times. And according to Can Kilic, a graduate student working with Arkani-Hamed, the physicist has created new fields simply by doing his own research. The recently appointed Harvard professor is such a genius that even capable graduate students quiver in his presence. “It sometimes takes a week or two to understand [something he said]. You don’t understand in real time with Nima,” says Rakhi N. Mahbubani, a fourth-year doctoral candidate.

Known as Dr. Nima to his students and colleagues, Arkani-Hamed earned that title in 1997. In the seven years since, he has quickly become one of the leading thinkers in string theory—the edge of physics’ cutting edge. The theory attempts to blend this century’s greatest theoretical discoveries—quantum mechanics and Einstein’s relativity theory—into a single unified theory of the universe. Who wouldn’t want to try that?

Arkani-Hamed’s work has centered on revising the theory of gravity. Working with colleagues at Stanford University, where he began his career, Arkani-Hamed proposed that the reason gravity is a relatively weak force is that its strength is diluted over nearly a dozen dimensions. That means that several dimensions we aren’t aware of might haunt our universe.

Arkani-Hamed’s hardly just begun his career. “This field has a way of asking, ‘What have you done for me lately?’” he says. The Harvard environment, he says, makes answering that question in the affirmative a little easier. “[Harvard] bubbles with energy,” he says. “Someone can do something amazing, and [that] inspires you to try and do the same.”