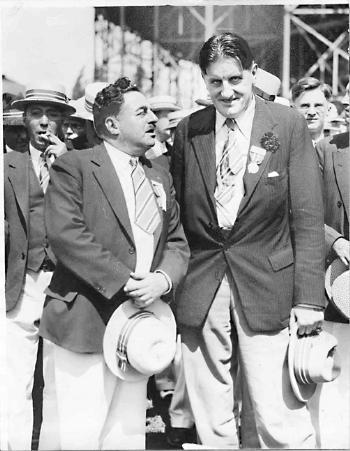 Ernst “Putzi” F.S. Hanfstaengl, Class of 1909, seen here chatting it up with a classmate at his 25th reunion in 1934, was a close associate of Hitler before the Second World War.
Advertisement
Advertisement

Nazi In Our Midst

There’s bound to be many a skeleton in Harvard’s closets, but the possibility of links to Hitler rattle a little
By Michael M. Grynbaum

There’s bound to be many a skeleton in Harvard’s closets, but the possibility of links to Hitler rattle a little louder than others. Last October, the media came running when a University of Oklahoma professor, Stephen Norwood, announced that he had found evidence tying Harvard to Nazi Germany. Speaking at an academic conference at Boston University, Norwood declared that Harvard had warmly received Nazi officers in the 1930s, formally recognized German universities taken over by Hitler, and voiced support for the Third Reich.

These were serious accusations—so how come we haven’t heard anything about them since? Norwood has returned to obscurity, and Harvard has declined to issue any apology or acknowledgement of wrongdoing in connection with the historian’s claims. What happened?

Norwood’s research was legitimate—it was the spin he placed on his findings that appears shaky. Central to his claims is the tale of Ernst “Putzi” F.S. Hanfstaengl, a popular member of the Harvard Class of 1909 who, when he returned as a class officer at his 25th reunion in 1934, was a chief Nazi press officer and personal acquaintance of Adolf Hitler. Norwood argued that by inviting the prominent Nazi sympathizer to an official event, Harvard missed a chance to criticize Hitler’s regime and ignored reports of Jewish persecution trickling in from across the Atlantic.

Harvard—which did not send a representative to Norwood’s talk—responded in a November 2004 press release that College tradition calls for inviting all alumni back for their reunions. University spokesman Joseph Wrinn noted that James B. Conant ’14, Harvard’s president at the time, had refused to accept contributions from Hanfstaengl. “Harvard University and President Conant did not support the Nazis,” Wrinn wrote.

Harvard never explicitly condoned Nazism, but it subscribed to the genteel anti-Semitism that pervaded the elite institutions of the country in the early years of the 20th century. The Hanfstaengl incident reveals a campus divided over the rising fascist regimes of the 1930s, but an administration that ultimately refrained from confronting the Nazi in their midst.

Son of a prominent New York art dealer and a well-known figure in the city’s social circles, Hanfstaengl was the quintessential Harvard man of his time: as an undergraduate, he rowed crew, enjoyed personal visits with President Charles W. Eliot, Class of 1853, and entertained students and faculty with his renowned piano skills. In an unfortunate bit of foreshadowing, he was particularly fond of reciting Wagner’s compositions.

Decades after his time in Cambridge, this blueblood remained a legend among Harvard students.

“In the early 1960s, we knew about this man,” said Jeffrey S. Mehlman ’65, professor of French Literature at Boston University, who attended Norwood’s lecture. “He was known as a good musician, and the big story was that Harvard was so powerful it had friends all over the world on all sides of every issue.”

Hanfstaengl traveled to Europe after World War I. “I returned to Germany, finding the country ‘flourishing’ under the blessings of the Versailles treaty,” he wrote in his reunion class book. “A year later I ran into the man who has saved Germany and civilization—Adolf Hitler.”

Always a bombastic self-promoter, Hanfstaengl soon became a close friend of the Fuhrer, reportedly delighting the rising politician with his Wagner renditions. By 1934, Hanfstaengl was supervising the Nazi Party’s foreign press office. He even acquired a nickname from his boss—“Putzi”—a moniker that would stick.

When Hanfstaengl’s 25th class reunion approached, he was invited by class marshal Elliott Carr Cutler, Class of 1909, to act as a vice marshal at the reunion. His reputation as a consummate Ivy Leaguer superseded concerns about anti-Semitism among students and faculty.

“He was an international celebrity, a good musician, and that was enough for his classmates,” Mehlman said.

But not all Harvard affiliates were happy to see their institution warmly welcoming a prominent Nazi. News of Hanfstaengl’s invitation spurred a flurry of protests from Jewish alumni and anti-Nazi student groups.

Harvard administrators initially responded with a shrug: the decision to offer the position was made by the independent reunion committee—it was out of their hands.

But as criticism mounted, Hanfstaengl was pressured into resigning his marshal position. The New York Times reported on June 12, 1934, that he would remain in Germany, but two days later ran a banner headline on page one announcing his decision to attend the reuinion anyway.

His arrival in New York was marked by angry encounters with over 1,500 anti-Nazi demonstrators. In Cambridge, anxious state troopers assigned him a security detail for the course of reunion week. Nevertheless, Putzi insisted on attending several receptions at the homes of prominent alumni, including a tea party at Conant’s residence. The president later wrote in his autobiography that his response to Hanfstaengl was “cold; I did not return the greetings.”

Not one to surrender the spotlight, Hanfstaengl held several press conferences throughout the week, entertaining questions from the pack of journalists hounding his path around Boston. On a stroll through Harvard Yard with reporters, Hanfstaengl was asked by a rabbi about concerns over treatment of German Jews. “I will say that the Jews’ situation in Germany is going to be normal before long,” he responded.

Tension came to a head at the commencement exercises on June 21, 1934. Two female undergraduates chained themselves to benches in the Yard and interrupted Conant’s commencement speech, chanting “Down With Hanfstaengl!” and “Down With Hitler!” The women were arrested for breach of peace, along with seven other undergraduates who protested in Harvard Square among nearly 2,000 others. Despite pleas for clemency on the part of Conant and the university, seven students were eventually sentenced to six months of hard labor.

For all the tumult, Hanfstaengl appeared nonplussed by the attention. “It has been the most enjoyable and successful vacation that I have had in years,” he wrote several months later.

While Norwood has focused on the Hanfstaengl incident as an example of what he says were “deliberate ties” formed by Harvard and Nazi Germany, the decision to invite Putzi appears to have been motivated more by Harvard tradition than politics.

“I think it was a time when it would have been unusual to refuse entrance to a Harvard graduate to his class,” said Richard M. Hunt, retired University marshal and co-author of Harvard A to Z. “Harvard has all kinds of heroes and also all kinds of rogues who come back all the time. I think this was something [Hanfstaengl] was entitled to.”

Mehlman, the Harvard alum, said that while Hanfstaengl was “no portrait in moral courage,” Professor Norwood “may have been naïve to be that shocked, given the sense that Jews had been systematically excluded from Harvard in the 1930s.”

Some students spoke out in favor of Hanfstaengl’s appearance, notably the editorial staff of The Crimson. In a June 13, 1934 editorial, Crimson editors argued that “if Herr Hanfstaengl is to be received at all, it should be with the marks of honor appropriate to his high position in the government of a friendly country.” The Crimson also referred to Nazi Germany in an editorial as a “great and proud nation.”

“There certainly was a strain of anti-Semitism that was quite pervasive, although not talked about very much,” said John T. Bethell ’54, author of Harvard Observed and former editor of Harvard Magazine. Indeed, Hanfstaengl’s invitation wasn’t the only nod to Nazism on display at the commencement: the Class of 1924 celebrated their tenth reunion by goose-stepping into Harvard Stadium for the playful Class Day exercises, holding their hands in a mock Nazi salute. The incident was blithely described by The New York Times in its account of the event and spectators did not seem perturbed.

“There was a lot of pretty tasteless stuff that went on then. There’s a lot of pretty tasteless stuff that goes on in the early 2000s,” Bethell said. “I’m afraid it’s not a great tribute to the younger generation of those years. Some of them were taken by Hitler, which they shouldn’t have been.”While Harvard hosted Putzi for the week, his attempt to leave a longer-lasting legacy was blocked. Months after the reunion, Conant rejected a $1,000 scholarship offer from Hanfstaengl, who hoped to endow a traveling fellowship to Germany for interested students.

Hunt said Conant showed “courage and conviction” in refusing to accept the gift. “It showed that there was in Conant and in the administration’s mind a clear awareness that this was an unacceptable gift from an unacceptable regime,” Hunt said.

Bethell takes issue with Norwood’s take on the scandal. “The university’s handling of it was much more responsible” than Norwood describes it, Bethell said. “He’s really got it in for Harvard I think.”

For all the hubbub, Hanfstaengl may not have been as substantial a figure as he’s been made out.

Hunt met Hanfstaengl in 1959 for his 50th reunion. “There was no publicity about him,” Hunt said. “While he was a rather imposing-looking man, he was unable to convince me that he was more than a lightweight.” Hunt maintains that many Harvardians saw Hanfstaengl as a bit of a “buffoon,” a social butterfly who had little tangible influence on Hitler aside from his skills at the keyboard.

“He played this all up,” Hunt said. “He was very adept at making himself appear greater and more important than he really was.”