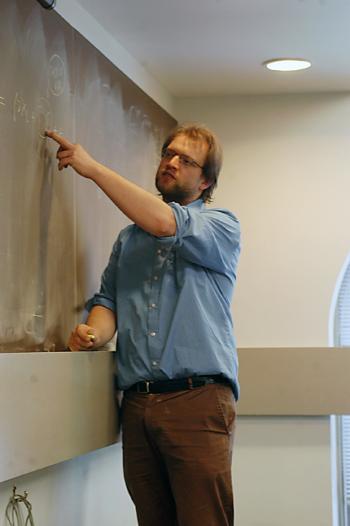 So you’ve used it as a dating service, as your own popularity meter, and as a stalker device. But have
By Aria S.K. Laskin

So you’ve used it as a dating service, as your own popularity meter, and as a stalker device. But have you tried it as a comprehensive and multi-varied micro-social research tool?

Unbeknownst to most of its 15,000 users, a number of academics have begun to use TheFacebook as a qualitative research tool, eschewing its traditional uses for more sophisticated ones.

“One of the very first people to do so was me,” Dustin A. Moskovitz ’06-’07, who has worked on TheFacebook since its creation last year, writes in an e-mail. “Actually. I used it in April-May as part of a 30 page paper for my Econ tutorial (I got an A).”

A small step for Moskovitz, but a giant leap for TheFacebook’s scientific career. Since Moskovitz’ final project, two researchers in Harvard’s Economics Department have used TheFacebook in their studies, too. Indeed, with its widespread popularity and its high traffic, the networking website—besides offering a way to find out your crush’s relationship status—might prove to be the most refined method of person-to-person social research yet.

“Network effects and social networks themselves are still open areas in science,” says Moskovitz, but since he and colleague Mark E. Zuckerberg ’06-’07 founded TheFacebook last February, all that’s begun to change.

“There are very few datasets the size and complexity of TheFacebook,” says Moskovitz, and a growing number of Harvard faculty would agree.

Assistant Professor of Economics Markus Möbius researches these kinds of social networks for a living. Last year, Möbius was searching for a cost effective way to see how friends learn from one another, so he contacted Moskovitz to use TheFacebook as a dataset.

Möbius then developed a simple trivia game—offering incentives for players to list their ten closest friends—which would load each time a user logged in.

“It was really easy,” says Jeremy P. Tchou ’08. “All I had to do was make up these questions and write down who I wanted them to be sent to. I ended up winning one free yoga class, but they sent me two—it was pretty sweet.”

But Tchou was not the only satisfied participant. Approximately 3,000 people participated in Möbius’ study, and although the study is on-going, Mobius has already discovered that using TheFacebook has at least two rewards.

“We know very little about how social interactions work on the micro level,” says Möbius, who hopes TheFacebook will eventually be used for person-to-person relationship studies.

Bryce A. Ward, a graduate student and tutorial leader in economics, sees the same potential. Ward recently organized a study comparing friendships in the Quad with those in the River houses and used TheFacebook to gather data.

But Ward is quite aware of the program’s obvious flaws.

“The real question of TheFacebook’s validity is, do these ‘friendships’ have meaning?” says Ward. It doesn’t take an economist to figure that Facebook fiend Dongbo Yu ‘07 might not consider all of his 578 Facebook “friends” his best buddies. Although Möbius’ study improves on loose social connections by weeding out the random kid from Freshman Week, using TheFacebook to research actual friendships is inherently flawed.

The Face of the Future

Regardless, obscure Facebook friends can become a useful asset, and that kind of networking is of great interest to researchers like Möbius and Ward.

“Low level social interactions can get you a job,” says Ward. “TheFacebook allows you to see the bigger picture.”

Möbius also thinks that TheFacebook can provide a window into the under-studied world of one-on-one interactions, even among people who don’t consider themselves best friends.

“It’s a tool to follow people over time,” he says, and long-term tracking can show the benefits of having a long list of people under the “My Friends” column.

But on a wider scale, Ward also thinks that TheFacebook, besides serving as a research tool, could also change the nature of friendships among its participants. According to him, that might be TheFacebook’s most intriguing legacy.

“There will be interest in finding out how TheFacebook changes social interactions,” he says, “It’s not just a research tool, it’s an intervention.”