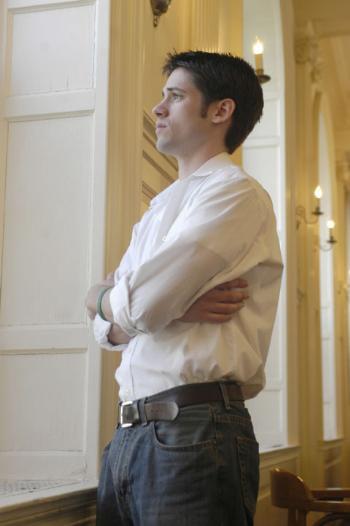 Matt Maham decided not to apply to law school for next year. Instead, he willk travel to Peru.
Advertisement
Advertisement

Disillusioned at the Top

You’d think, of all people, former Undergraduate Council President Matthew W. Mahan ’05 would have it all figured out. At
By Leon Neyfakh

You’d think, of all people, former Undergraduate Council President Matthew W. Mahan ’05 would have it all figured out. At the very least, you’d think he’d have a long-term plan: law school, probably, then the inevitable promotion to Washington. He might have an internship lined up for the summer on Capitol Hill, or an entry-level position at the Attorney General’s office.

For most of his life, Mahan himself would have agreed—but midway through his term at the UC, something changed.

The UC job had him on five cups of coffee a day; his day-long meetings, often starting at 7 in the morning, left him an average of four hours of sleep a night. There was no time for reflection, he says, and no time to think about anything beyond his daily schedule. His 50-hour-a-week responsibilities had pushed every other aspect of his life to the wayside.

He skimmed his coursepacks on the way to section, his papers took a second seat to e-mail correspondence with colleagues, and UC-related dinner meetings replaced meals with friends.

“I just realized that this could very easily become my lifestyle, day in and day out—not just one crazy year, but my entire life,” Mahan says. “That kind of freaked me out a little bit, and I think I realized over the summer that there was a lot more to life.”

So he took last summer off and went home to Watsonville, Calif., to live with his mother, a high school teacher, and his father, a postal worker. While home, he did a little work for the Kerry campaign and studied for the LSATs, but most of his days were spent at the beach, doing reading for his thesis—a tract on the state of liberal arts education in the 21st century.

RETURN TO THE CAGE

He came back to Harvard facing another semester as UC President and a host of new responsibilities as a student representative for the general education committee of the Curricular Review. Already disillusioned with the Harvard undergraduate experience, Mahan developed a distaste for the well-worn road he knew most of his classmates would take after leaving the University. Suddenly, the sunny, idealistic face of Harvard loathed the ambitious, pre-professional tendencies of his classmates. Harvard students should be using their privilege to change society, he decided, instead of “perpetuating the status quo.”

“Look at the senior survey data,” he says. “The number of students going into business, government, law, or medicine is, like, two-thirds of the class. It’s astounding.”

Avoiding the norm would be risky, he knew, and since most Harvard students got to be where they are by avoiding danger and sticking to the script, it would take a serious shift in culture for things to change.

“I think it’s so sad that the vast majority of Harvard students will go into a very lucrative profession, do a little bit of community service on the side to feel better about their lives, do nothing to change the underlying structures that have produced them,” he says. “They’ll, you know, live in a beautiful suburb where they never have to confront homelessness and poverty, and all end up in the same retirement home where they’ll play golf until they die.”

John H. Summers, Mahan’s thesis advisor in Social Studies, says that Mahan maximized on his unique experience as UC president to “articulate the gap between the experience that comes with a liberal arts education and what it’s actually like to go to school here.”

The rhetoric of academia was still being pushed from above, Summers explains, but Mahan discovered that the reality of campus life was that students are regrettably driven much more by preprofessional ambitions.

“My thesis was a personal exploration in a lot of ways,” Mahan says. “I had to come to terms with the fact that for the most part I had instrumentalized my academic experience and focused more on just getting through the classes than really being changed by them.”

While the grueling UC schedule continued to dominate his time, Mahan’s ongoing personal crisis occupied his mind. The UC proved unreceptive to his calls for more forceful positions on divisive political questions, but Mahan tried to use the “bully pulpit” of the presidency to make a difference.

He stayed on the grind though, according to former UC vice president Michael R. Blickstead ’05, and continued giving his whole life to the UC despite his personal reservations.

In February, with his UC term behind him, Mahan joined forces with former Black Men’s Forum president Brandon M. Terry ’05 to launch a protest fund in opposition to the University’s investment in PetroChina, an energy corporation with ties to the Sudanese genocide.

“He realized how much sway students have nationally and globally,” Terry says. “Once you get a position like UC president, everything you say gets picked up or noticed. Once you really begin to get a taste of that you realize that you can use this power to do something important, like save people’s lives in Sudan instead of ‘let’s host another movie night.’”

The high-profile duo called their campaign Senior Gift Plus, and asked graduating seniors to withhold their traditional donations to the Senior Gift Fund until the University divested. A little over a week ago, the work paid off.

In the meantime, the registration date for the LSATs came and went, but the now-bearded Mahan had made a firm decision to hold off on law school.

He immersed himself in the curricular review and his thesis and applied for the Rockefeller Fellowship so he could travel to Peru after graduation. Mahan, one of only five seniors to receive the grant, says he hopes to “find [himself],” most likely working in agriculture and reading in his spare time.

Today, the liberated Matt Mahan revels in his newly uncertain future. After he gets home from Peru, he plans work for Teach For America, a program which places recent graduates in under-funded urban-area classrooms. After that, the slate is blank.

“I’m not willing to go to law school just because it’s the next logical step,” he says with defiance. “That’s just too easy. I’m going to go do some radically different stuff for a while… and just see where that takes me. It’s kind of open ended, which is scary but exciting. I would hate to have my life planned out for me.”

Editor's Note: Due to an editing error, the online version appears as a different version from the one in print. FM apologizes for the confusion.