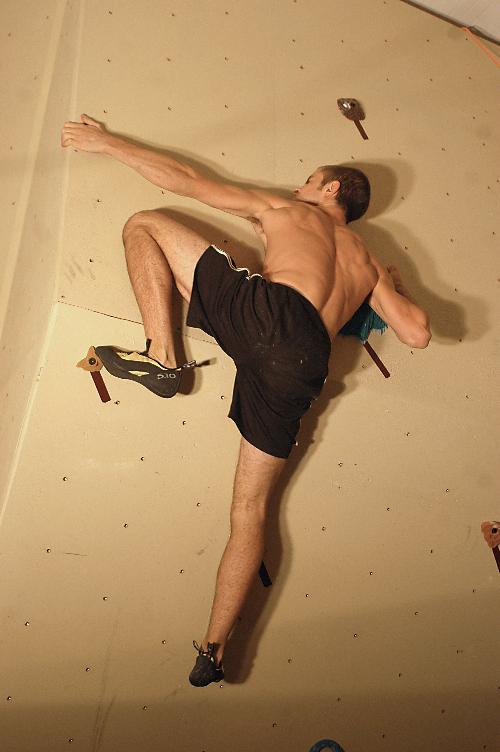 Hard as a Rock Wall

Looking for a way to make an imprint on Harvard? Sure, marking your territory on the John Harvard Statue has
By Melissa Tran

Looking for a way to make an imprint on Harvard? Sure, marking your territory on the John Harvard Statue has its appeal, but your hard work is gone with the sweaty hands of tomorrow’s unsuspecting tourists.

However, Keller C. Rinaudo ’09 is making his mark in a more permanent way—building a rock-climbing wall in a squash court in the basement of Lowell House.

After climbing MIT’s bouldering wall last year, Rinaudo approached the Faculty of Arts and Sciences, and Lowell with a plan, got approval, raised $45,000, and started building in July.

Karl R.R. Kuryla, a Harvard Business School student and member of the Harvard Mountaineering Club, has been Rinaudo’s partner in climb (!) throughout the process, bringing his construction experience and know-how to the project. He loves the wall, but says, “It’s taken so much more time than I ever expected it to.”

Although they’re working without a strict deadline, Kuryla and Rinaudo spent most weekends in Lowell’s squash court #2, sometimes working 15-hour days to get their wall up and ready. Four months and 4,500 footholds later, Kuryla and Rinaudo’s 32-by-18-by-16-foot beauty is near completion.

But have all the blisters and wood splinters been worth the trouble?

“Having something like this is something I can come back to in 25 years,” says Rinaudo, “and there will still be kids climbing it.”

Can’t exactly say the same for what you left on John’s foot.