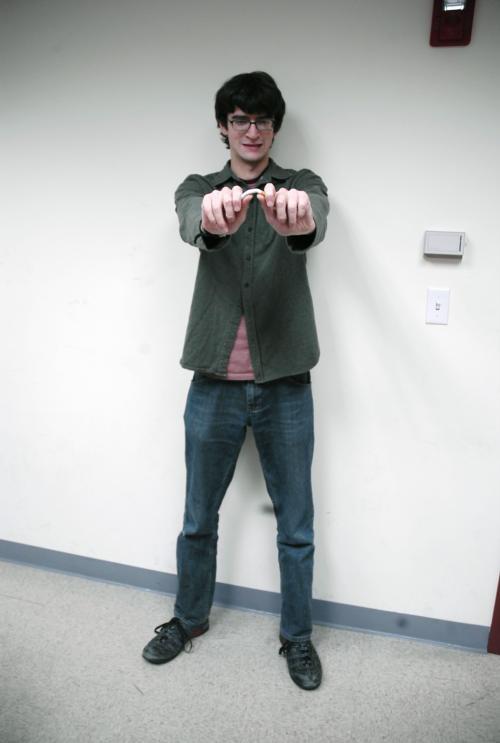 Leon Neyfakh kicks his habit in the (cigarette) butt, with a little help from a friend
Advertisement
Advertisement

I remember once when I was in sixth grade I stole one of my mom’s Capri minty ultra-lights and took it down to the bathroom in the basement. When I came back up I smelled like a cigarette and my mom gave me a REALLY hard time about it (“you stinker,” I think was what she said... I was only twelve!). But here’s a hilarious joke: it wasn’t until I discovered cloves the summer after my senior year of high school that I really started “lighting up” on the regular. That went on for three long, happy years. During that time, I probably took a thousand study breaks and met literally dozens of girls. I was known as “the smoker,” and in some circles, “smokey.”

Now, thanks to an old Russian man from Brookline, it’s all over, and I’ve been smoke-free for three weeks.

The man’s name is Yefim Shubentsov, a.k.a. the Mad Russian. Bioenergetics is his business; saving lives is what he does. After a two-hour group hypnosis session and a minute of one-on-one face time, I walked out of his office a little dazed, a lot skeptical, and, though I didn’t know it at the time, completely cured of my addiction.

I don’t know how many years Dr. Shubentsov’s been in the quitting game, but according to his press materials, he’s cured thousands of people, among them Billy Joel, Courtney Cox, Drew Barrymore, and Amy Tan. His self-proclaimed success rate is 98%, and in addition to cigarettes, he can do weight-loss, drugs, phobias, and alcohol.

I’d had my last cigarette back in the Square, while sitting outside of Boylston Hall and reading some books in the nice fall weather. Two hours later, when I walked into Dr. S’s office, I greeted the receptionist in Russian and she told me to take a seat by her desk. Her name was Rita, and she was going to explain some things to me. A minute later, another Russian patient walked in, a woman wearing a red and white tracksuit and a Dior hairclip. “If you have trouble afterwards, you call him and he will call you back that day and help you,” Rita explained. “Just say what problem you are having, and he will call and do his thing.”

“It works,” she kept saying, sounding more convincing than she had any right to.

“Oh God, Rita, let it please be true. He is the last hope,” said my tracksuit friend, who happened to be disgusting.

As the room filled up, I played a game with myself where I tried to guess who was addicted to what. In the meantime, the phone kept ringing and Rita kept shouting. “Yes, Maria, what is your problem! Weight control? Okay—I will give him the receiver and you think ‘I am eating sweets, I am eating between meals.’” A second later, into the other room: “YEFIM! Weight control, line two!”

After we all walked into the main room and took seats in a circle, we got our first peek at the Mad Russian himself. The first thing I noticed about him was that he was pure muscle. In most other ways, he looked like Mikhail Gorbachev. “Do not worry about it, life is supposed to be miserable,” he kept saying as stragglers walked in late.

Talking at breakneck speed in his thick, barely intelligible Russian accent, Dr. Shubentsov declared that he didn’t believe in mysticism, and that he wasn’t going to “reach into our brains.” Having satisfied our skepticism, he went around the room and asked each of us if we suffered from depression or anxiety and whether we were feeling any pain. If someone said they did­—all the old women had achy joints­—he moved his hand around like a magician and flapped his fingers in their direction. All of them said their pain was gone.

After that, he started lecturing. During the two hours we spent listening to him, he said things about daily exercises (do them), psychotropic drugs (don’t take them), and water (don’t drink too much of it or you will grow fat). He also told us about a guy who tried to kill him, and the Soviet army sergeant who pushed him out of a plane even though he had heart palpitations.

After the lecture was over, we all sat in the lobby and waited to go in for our brief, closed-door one-on-one. During mine, he told me never to take methadone, I guess because I am so skinny? “Never take methadone,” were his exact words.

I won’t reveal anymore of what the Mad Russian told me—I don’t want to spoil the program for any of you smokers out there—but I will offer this: back in 1999, a reporter asked him to explain his technique, and this is what he said: “If you never ate sushi, you cannot crave sushi. The French have an expression, ‘Don’t show your girlfriend a new restaurant because if you do, she will ask you to take her there.’ You only really crave what you have had before.”

How weird is that? I don’t smoke anymore.

—Leon Neyfakh is a History and Literature concentrator in Currier House. He no longer smokes, but is still smokin’.