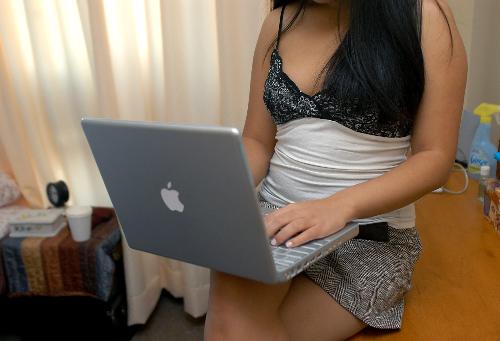 Suiting Up for Sex

I dated an investment banker this summer in Los Angeles, and it was the best and worst decision of my
By Lena Chen

I dated an investment banker this summer in Los Angeles, and it was the best and worst decision of my life. At first, I found David’s (not his real name) Republicanism endearing and thought I could reform his soul. And despite his corporate job (being an “Excel monkey,” as he called it), I found our conversations witty enough to stomach dating a yuppie working for the Man.

After our first date, I took off for a trip and came back to an e-mail: “Yesterday was fun. Would love to get together again sometime. Have fun in San Diego; and give me a buzz when you are back in town.”

How prompt, I thought at the time. Though his note struck me as a bit peculiar, I gave him the benefit of the doubt. Perhaps it was his way of being sweet.

It wasn’t until weeks later, when we began dating exclusively, that I realized what I found so strange about our interaction. He treated our relationship like a business transaction. He made notes on his Microsoft Outlook task list to get back to me. He signed all his e-mails with “Regards, David.” Like clockwork, he’d call every morning, lunch hour, and evening. He answered the phone with his full name. My boyfriend wasn’t predictable; he was robotic. We were sleeping together, but it was the most impersonal relationship I’d ever been in.

At Harvard, dating as business rings particularly true. Instead of assessing suitors’ traits based on their personality, we look toward what they can offer us, or worse, toward their earning potential.

“It’s like investing in a stock,” said a fiscally conservative male friend—he and all my other friends asked if they could be anonymous so that they could speak more freely. “You’re not just going to throw your money at a random penny stock that’s not going to perform better in the future.”

My friend might be taking an extreme stance, but his opinion isn’t entirely without merit. When it comes to relationships, Harvard students are preoccupied with what’s in it for them. “I think everything in life is a cost-benefit analysis for Harvard students, especially relationships,” he said.

My mother would agree. When she found out I was dating a state school graduate, she told me, “You could’ve at least slept with a Harvard student!”

The scary part is that my environment has rubbed off on me. I thought she made a valid point.

It’s not surprising. After experiencing the stress of recruiting season, is it any surprise that Harvard students approach relationships like it’s a job? Even on dates, people often repeat their résumés as if they’re on interviews.

“People get so used to approaching things in a business-like manner, when the opportunity comes up to relax and get to know someone, they don’t know what to do and that breeds social awkwardness,” said one of my friends.

“I go out on dates and I’m bored. Every single time. It’s like small talk, small talk, small talk,” complained another girlfriend. Without concentrations, Houses, or summer plans as discussion topics, would Harvard students have anything to talk about? Recently, an acquaintance informed me that the most interesting conversation she had was with a woman taking her tooth X-rays at University Health Services.

Unfortunately, I could relate. When I dated a Berklee College of Music student last February, I immediately noticed the difference between him and Harvard guys. On our first date, he casually tossed around the word “fuck,” which seemed unimaginably crude to me until I realized that I used the word all the time. While I was wearing what could be called an outfit, he was dressed in a baseball cap, T-shirt, and jeans—a get-up that never varied on our subsequent dates.

The difference between us was that I was concerned about first impressions, even if it meant that I held back on acting like myself. He may not have been particularly polished, but the trade-off was that he possessed a certain aura of authenticity missing from the Harvard guys I’d gotten used to. Around him, I could talk about anything, without worrying about the impression I gave off.

Not surprisingly, my friends didn’t approve and that relationship didn’t last. I went back to dating finance types and he pursued his passion for jazz guitar.

Months later, I met David. But though I had learned by then that love is not quid pro quo, I soon found that my summer love thought differently.

Out of curiosity, I asked him once if he wanted to go back into investment banking after business school. Surprisingly, he said no.

“Sometimes you push through deals that aren’t always the best for the clients,” he explained. Even when his company knew better, they often forged ahead anyway, because they’d only be compensated if the deal closed.

And like one of David’s clueless clients, it wasn’t until the eleventh hour that I realized our relationship was not in my best interest. In the end, he treated me like a deal gone bad. Rather than being honest about his qualms over our age difference and the long distance, he removed himself from my life rather abruptly when he decided at the last moment that we shouldn’t be dating. David later confessed that he spent the whole of late summer “trying desperately to not fall in love” with me. He wanted to listen to his head, even if his heart felt differently.

These days, the two of us are on better terms. In the aftermath of our breakup, he admitted that he treated me “horribly” and was a “huge jerk.” Now 3,000 miles apart, we still bicker over politics and feminism on the phone, but we’ve come to accept that we’ll always have our differences.

David has moved on from investment banking and now works for a major entertainment company in corporate development. He says that my liberal ideals have made him a better person, more empathetic than before. And now that we are friends, I consider salvaging his soul a non-profit effort.

Lena Chen ’09 is a sociology concentrator in Mather House. When she is not braving the winter in a miniskirt, she writes a sex blog at www.sexandtheivy.com.