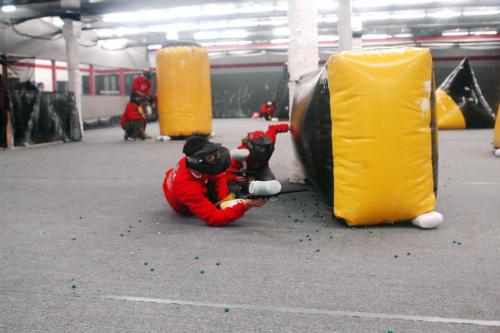 After sparring in years of policy debates, the Harvard Republican Club and College Democrats finally took up arms. The result: a decisive HRC victory.
Advertisement
Advertisement

In an era of venomous partisan rancor in Washington, the Harvard College Democrats and the Harvard Republican Club (HRC) sorted
By Samuel C. Scott

In an era of venomous partisan rancor in Washington, the Harvard College Democrats and the Harvard Republican Club (HRC) sorted out their differences, exchanging trash-talk and welt-raising projectiles in the first “Bipartisan Paintball Brawl.”

Though The Crimson has already offered one perspective (“Partisans Clash in Paintball War,” 2/3/06), FM decided to evaluate the battle strategy of the warring factions.

Fearless and well organized, the Republicans charged out of the gates with guns blazing, while the Democrats pursued a cautious strategy of hiding timidly behind defensive cover.

The HRC wrapped around the Dems’ right flank—like how their party outflanked Democrats on values issues—exposing them to crossfire more withering than the diatribes of Fox News pundits.

A victory for the Second Amendment proponents was natural. When HRC member Matthew D. McCluskey ’07 asked “Who’s handled a firearm?” about half the HRC cluster raised their hands.

In the arena, allegations of cheating flew faster than after a tight election. And, like all political spats, big business played a large role. HRC arranged sponsorship from Boston consulting firm SpiderSplat, which fronted $600 and sent a few consultants to play with the young ideologues and to recruit interns.

FM embedded itself with the troops and, in an act of magnamity, took up arms with the beleaguered Dems. Unfortunately, FM’s firearm malfunctioned under fire, making it an easy target of opportunity.