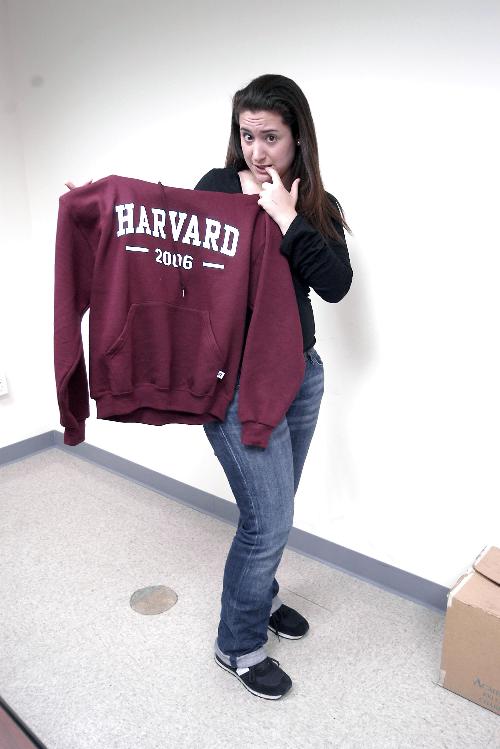 It started slowly. In March, I got a concerned phone call from my mother, who had just received the schedule
By Jessica E. Schumer

It started slowly. In March, I got a concerned phone call from my mother, who had just received the schedule for Commencement 2006. She was full of nagging questions about the details: “How can we get extra tickets?” “Where do you want to go to dinner” “I have to be in my seats at what time?”

Then a few days later, I began to get e-mails from the Harvard College Alumni Association. And last week I was told by my department to compose an intellectual autobiography detailing my four years of class work. It should have been obvious: Harvard was sending me a message. After four years and around $150,000 in tuition, my days were numbered.

But it wasn’t until this past weekend, when I saw hordes of wide-eyed prefrosh, red folders in hand, that it hit me—I am being pushed out to make way for the class of 2010. I wasn’t jealous of the prefrosh, it was more of an acute sense of frustration: just when I finally figured this place out, it’s time to move on. In perhaps a vain attempt to spare others this frustration, I have complied a list of 10 things I wish I learned sooner (to the extent that I ever really learned them).

As Oscar Wilde once wrote, “The only thing to do with good advice is to pass it on.” So, in this spirit of altruism, follow the random musings of a senior with too much time on her hands:

1. Writing a thesis is a good thing. Yes it’s painful, sure, it’s horrible, and yes, I went through at least one week without sleeping, showering, or eating. But in the end, the effort was absolutely worth it. It’s the one chance you have to create something entirely your own, and to put sustained effort into something original. Your thesis doesn’t have to cure AIDS. Writing about a subject you are passionate about almost always produces a better thesis then writing about something that sounds sexy.

2. Get Out of Cambridge­—Being a typical New York snob, I always figured that there was really nothing Boston could offer me. I have only been disabused of that notion in the past few weeks. Boston is a great walking city, and getting out of Harvard Square even for a few hours feels like a vacation.

4. Try to avoid drinking cheap alcohol out of red plastic cups—In other words, find a way into establishments where the drinking age is 21. Smaller amounts of nicer alcohol always beat massive quantities of Ron Roberto Rum. You’ll save your dignity and your liver.

5. Go on a real spring break—It took me until senior year to go on spring break, and I wish I’d learned the joys of lying on a beach drunk at 11 a.m. sooner. Get a group of friends and go someplace warm and preferably all-inclusive.

6. Broccoli Chicken Cheese Breasts only have 220 calories per serving—So don’t deny yourself the ultimate hangover food in the name of healthy eating.

7. Don’t be afraid of office hours—I always hated the idea of going to see a professor without the goal of talking about an assignment. But after getting over my initial paralyzing self-doubt, it was fun to discuss some of the material from class in more depth. (In the interest of full disclosure, I still am uncomfortable going by myself. I usually find a friend in the class to go with me.)

8. Attend athletic events—Harvard-Yale doesn’t count. Believe it or not, there are several varsity, JV, and club sporting events to choose from every weekend. I am probably one of the least athletic people in the world, but its still fun going to a football or hockey game with a group of friends. (Note: tailgating is an acceptable loophole to the no plastic cup rule.)

9. Save all your e-mails—you never know when that drunken e-mail you received from a friend sophomore year will come in handy (not for blackmail, but for later hilarity). And going back and rereading some of your earlier e-mails is always refreshingly mortifying.

10. Don’t take anything too seriously—So you didn’t become the head of your choice extracurricular, you cried when you found out your housing assignment,* your section leader is the biggest tool, your three finals were scheduled back to back, and the list goes on. (Note: all of the above happened to me.) Shit happens to everyone here. I always take comfort in knowing that, no matter how messed up things seem, someone probably has it worse.

Despite all things I could complain about during my time at college, the good far outweighs the bad. Ultimately, if I had known these things earlier, would I have been happier? Maybe. But for now I’m going to enjoy the last few days when being compelled to wake up at 9 a.m. seems like a grave injustice. And when the e-mail comes announcing that it’s time to sign up for a post.Harvard.edu e-mail address, I’ll be ready for it.

* I was placed in Mather, and I wouldn’t want it any other way now.

She can be found at senior bar, drinking from a martini glass.