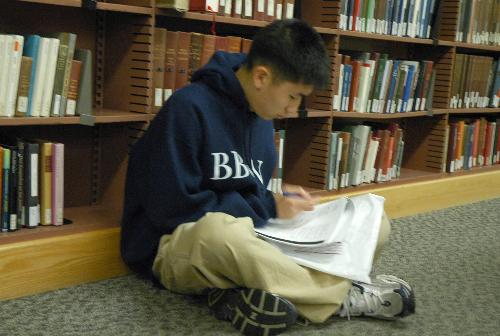 Much like waffles on Sundays and gratuitously awkward ice cream bashes, reading period is revered as a venerable part of
By A. HAVEN Thompson

Much like waffles on Sundays and gratuitously awkward ice cream bashes, reading period is revered as a venerable part of Harvard’s fabric. Yet T.S. Eliot, Class of 1909 and Henry B. Adams, Class of 1858 managed to graduate sans a break to cram between classes and exams. That’s right—reading period actually began a paltry 79 years ago, under the auspices of then-University President A. Lawrence Lowell.

“Reading period was initially a faculty benefit, and students benefited indirectly,” says Reverend Peter J. Gomes, Plummer Professor of Christian Morals and Minister in Memorial Church. In 1927, Clifford H. Moore, the Chairman of the Committee on Instruction, penned a confidential proposal to the Committee on Instruction; he suggested shortening the periods of formal teaching in order to give the faculty a break from teaching and instill self-reliance in students.

“The retention of the nine-months schedule of continuous teaching and examination is at the expense of the advancement of knowledge,” the proposal complained. It also worried that too much teaching might spoil the student: “He needs supervision in order that his efforts may be wisely directed toward a definite end. He needs freedom in order that he may learn to rely upon himself.”

The remedy Moore proposed was reading period in its original glory: that is, 12 weeks of teaching each semester plus two and a half weeks of reading period after fall term and three and a half weeks after spring term. The new system was test-driven that January, and the results were duly noted by the librarians, professors, and deans of Harvard in reports written to Lowell and other administrators.

They described the first reading period as a success. “I cannot say too much praise of the way in which students worked and the almost entire absence of fault-finding and underhand practices, in spite of the crowded condition of the room,” wrote William C. Lane, College Librarian, in a Feb. 4, 1928 letter to Lowell. His missive also included statistics on the number of employees hired for overtime and explained the cost of a fan used to make the reading room more comfortable.

Dean of the College A. Chester Hanford popped into bars, libraries, and clubs around campus, and wrote to Lowell on Jan. 24, 1928 that “all reliable data that I can gather indicate that substantially all of the students were here and at work.”

Yet even in its earliest inception, reading period was far from perfect. Evidence from William B. Munro, the professor of Government 17 in 1928, suggests that the ample free time of reading period could damage the standing of already less competent students. He found that the extra time improved the grades of students already earning As and Bs, but that coursework done after reading period resulted in lowered grades for the lowly D and E earners. Munro concluded that “as Government 17a is concerned there is ground for the conclusion that the profitableness of the reading period is almost exactly proportioned to the quality of the student.”

Munro was a little blunter than the average professor today, but his sentiments regarding the potential for reading period abuse have stuck around. Over the years, in fact, reading period has steadily shrunk from nearly a month to where it is today, nestled at 11 days in the fall term and a whopping 12 days for the spring term.

Lawrence Buell, Cabot Professor of American Literature and former dean of undergraduate education, is one faculty member who doesn’t worry about a foreshortened reading period. Buell served as Dean from 1992 to 1996, during which time reading period policies came under scrutiny. During such discussions, Buell sided with the minority—those who felt reading period should be re-examined.

“I guess if we were really going to do messing with the calendar…I’d like to see more class days and an abbreviated reading period and exam days,” he says.

But Gomes calls reading period “an absolutely essential piece of our calendar.” He attempts to respect the spirit of Lowell’s original mandate. “I catch up the stuff I haven’t been able to do before, I try to clean out accumulated bits of work, I breathe easier I must confess during reading period,” he says.

Reading period has shrunk throughout the twentieth century, however. In 1994, The Crimson reported that the Undergraduate Council and the Committee on Undergraduate Education had shortened spring reading period by two days due to the College’s attempt to equalize the calendar. Today, the litany of reading period complaints range from students required to hand in problem sets throughout reading period to those who focus their time on writing papers instead of reading. Gomes sees such assignments as a departure from the original spirit of reading period. But Dean of Freshman Thomas A. Dingman ’67 feels that longer assignments may be suitable for the reading period timeslot. “I think that sometimes the papers and the projects are part of this synthesis,” he says.

Dingman adds, “I’ve gotten one e-mail from a freshman this spring, stating ‘am I aware that a class is continuing to meet and that there are additional expectations for work, and where is the time to pull back and get some perspective?’” As a response, Dingman passed the e-mail along to the Office of Academic Programs. “I think it’s an ongoing topic of concern, this is not news for anyone, really,” he says.

Even Harvard’s most positive professor, Lecturer on Psychology Tal Ben-Shahar ’96, doesn’t view reading period as the break Lowell once intended. “I have the summer to do my reading and stuff. Right now I have a lot of administration to take care of. The real break starts once the grades are in—that’s when I really feel that the break begins, I can reflect on the semester.”

Whether you love or hate reading period, its place as a Harvard tradition is indisputable. “Most students see reading period as one of the advantages of the Harvard way of doing business,” says Gomes.

Lowell would be so proud.

Want more history? Learn about the origins of Primal Scream at www.thecrimson.com/magazine/aspx.