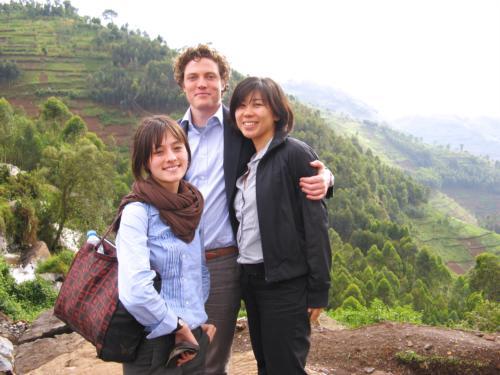 It started as a sketch on a napkin, and it became an international health movement. The napkin first came into
By Hyung W. Kim

It started as a sketch on a napkin, and it became an international health movement.

The napkin first came into play when Graduate School of Design architecture student Michael P. Murphy attended a lecture by Medical School professor Paul Farmer, co-founder of Partners in Health (PIH). Murphy was shocked to find that there were no architects assisting Farmer in designing the modern and sanitary hospitals integral to PIH’s mission. Previously, the only hospital design had come from Farmer’s amateur napkin sketches. These napkins and lack of real architectural support inspired Murphy to get involved, spearheading a movement with fellow GSD students to build an innovative hospital prototype in Rwanda.

“I just wanted to know how to get involved,” Murphy says. “I didn’t know how to design hospitals, but I would learn.”

Just months after expressing interest in the project, Murphy was on a flight to Rwanda with Alda Ly and Marika N. Shioiri-Clark, two other architecture students at the Design School, to do research for a potential hospital in the country’s Butaro district. In Rwanda, they found blueprints that included rooms with poor ventilation and dim lighting, both of which are ideal conditions for the spread of tuberculosis.

In response, the students began to design a more appropriate structure, choosing to use larger windows and other devices that harness the natural movement of air to create a passive ventilation system. And as an added perk, “these windows give amazing views of the Rwandan countryside,” Shioiri-Clark says.

The students’ blueprint will in the future be copied for hospitals in Haiti and other rural areas. Beyond this, the Design School students also want to help make humanitarianism a bigger part of the architectural field. They have established their own non-profit organization, called Model of Architecture Serving Society, which connects aspiring architects to projects like this hospital.

“Over the years, architects have cornered themselves into a luxury market,” Ly says. “We hope that this is part of a move away from that.”