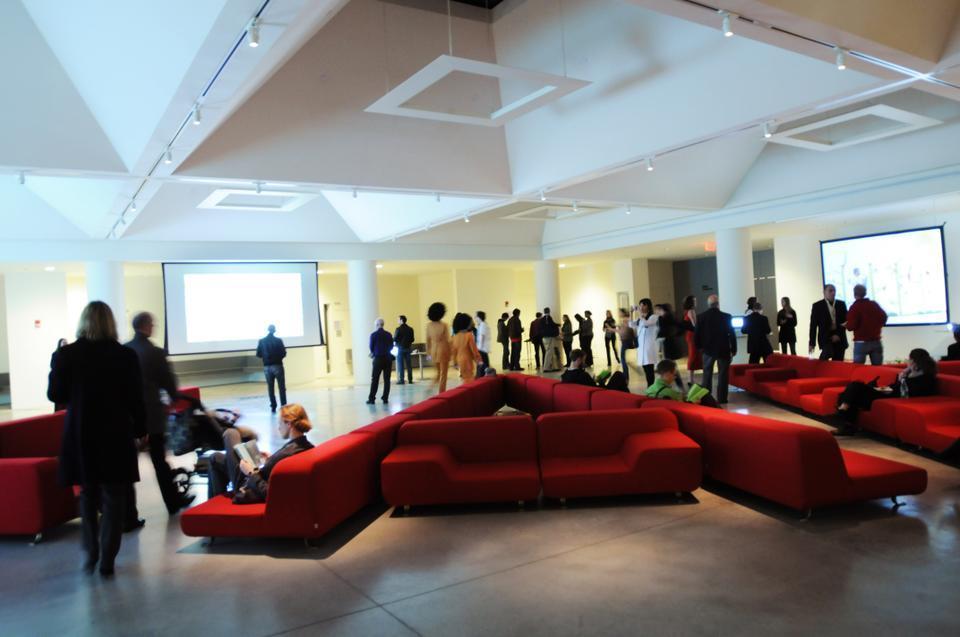 The Grand Opening of the Laboratory at Harvard was celebrated with the flair one might expect to see at the opening of an art gallery.
By Michelle B. Timmerman

The Grand Opening of the Laboratory at Harvard was celebrated with the flair one might expect to see at the opening of an art gallery. Members of the audience nibbled on hors d’oeurves in small clusters as they circled the large, softly lit room, perusing exhibits. Women wore pearls and heels; men wore scarves and leather gloves. Music played, and small groups lounged on low-seated red sofas. The air buzzed with eager discussion. But this wasn’t a traditional art show.

College students in sweatshirts circled the room with equal enthusiasm, the red sofas spelled out “LAB,” and the audience wasn’t admiring still life paintings. Instead they viewed a smartphone that can lead them to the nearest metro with three-dimensional sound and a soccer ball that can harness the energy of motion for later use as a power source.

The Lab at Harvard will serve as a uniquely interdisciplinary place, encouraging students to exhibit and discuss their ideas, inviting other students and the public to partake in the process of creation.

The Lab is modeled after Le Laboratoire, an experimental art and design center in Paris, and has been in the making since 2005. It is like an experiment in itself, only designed to last for three years, when it will be reevaluated.

“Like any experiment, we’ll look at the hypothesis,” says W. Hugo Van Vuuren ’07, a fellow at SEAS who helps lead the Lab. “What have we learned? Where are we going to go from here?”

According to Professor David A. Edwards, faculty director of the Lab, the space is intended to be a “sandbox sort of play zone,” where creative people can be “encouraged to dream like they’re encouraged to analyze and not [be] punished by breaking a mold that is defined by some concentration.”

The Lab works to facilitate interdisciplinary discussion and teamwork, as displayed by its six motley partners—the A.R.T., FAS, GSD, the Idea Translation Lab, the Lab Office of the Provost, Le Laboratoire, and SEAS.

A “noble goal” of the Laboratory, says Edwards, is “to make clear the universality of creative thought at Harvard University.”

Local alum Ogden T. Ross ’75, who attended the grand opening, notes that this effort is a departure from when he was a student. “When I was here there was a division into specialized units. Now there seems to be an interdependent movement to enhance the productivity of the university.” He did question, however, how the Lab could function within the University at large. “It’s hard to see the structure of the Lab at this point.”

A PLACE TO CREATE

Much of the Lab’s structure—and its spirit—seem to lie in its location. In the basement of the Northwest Science Building, concrete floors, whitewashed walls, and a large, open space greet the visitor. Twelve “idea columns” that will be used to exhibit ongoing projects surround the open space.

Van Vuuren stresses that the Lab’s versatility meets the scope of its purpose: “You can change the room from an academic colloquium to a cutting edge post-modern art space to a catwalk to a design studio where you can have charrettes.”

The Lab seems to construct a hip aura from its website’s nerd-cool font to the presence of members of the Donkey Show at the Grand Opening. Edwards, who was recently selected as one of the 25 most stylish Bostonians by the Globe, says the Lab has a “very anti-institutional feel to it.”

Venkatesh “Venky” Narayanamurti, former dean of the School of Engineering and Applied Sciences, and a member of The Laboratory’s Executive Committee, calls the Lab a “Renaissance place,” and says he fully supported its construction on one condition, “that it’s intimately tied to the Harvard undergraduates.”

Many of the undergraduate projects exhibited at the Grand Opening are the products of ideas first materialized in Edward’s Idea Translation course, Engineering Sciences 147. The class encourages students to develop breakthrough ideas by fusing the arts and sciences.

Yi Wei ’10, a student fellow at the Lab, began developing Gigue, which turns a person’s body rhythms into music, during the class. Wei stresses that the boundary between the class and the Lab is not as important as the number and diversity of talents involved in the creative process.

And for the Lab, the process is key. Van Vuuren, who hopes that the Lab not only encourages students to come to Harvard, but also to stay here after they graduate says, “Society doesn’t celebrate the painful process of creation. We celebrate the beginning and the end. Rather than focus on making products we [at the Lab] focus on the process.”

Van Vuuren encourages all students to partake in this process. The Lab will hold its first Idea Night on December 4 with student exhibitions and performances, food, and music. The Lab is also reaching out to experiential courses, and by the spring should become a common space where students can have meetings and access equipment.

Just as “the pub is for weekend socials,” Van Vuuren says “the Lab is where students can showcase creativity. It’s where they can come to create.”