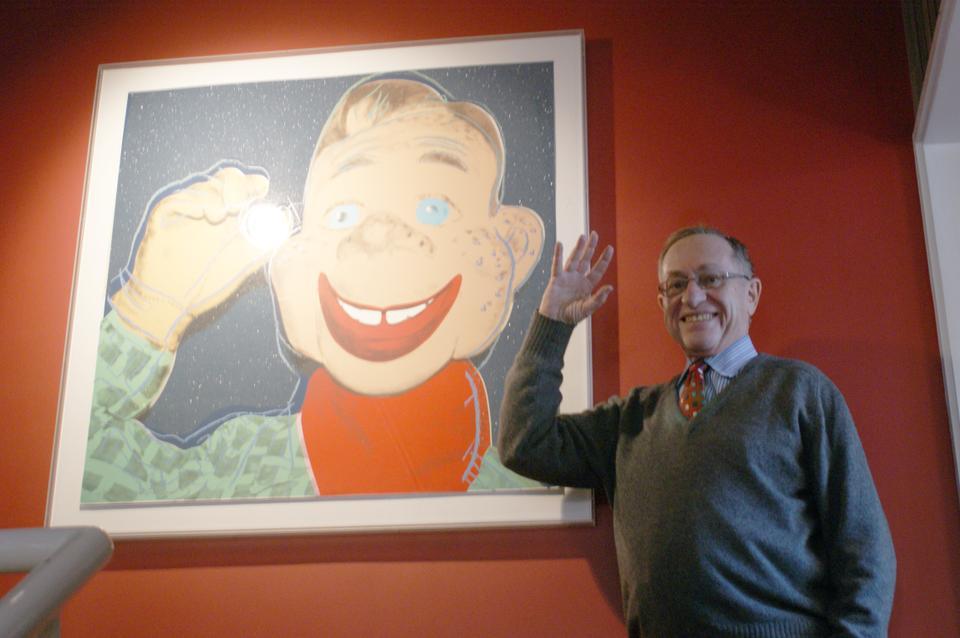 Dershowitz shares his home with his wife, Carolyn Cohen, a psychologist and supervisor at Harvard Medical School. The couple bought their West Cambridge abode from Nobel-Prize-winning biologist David Baltimore, and they count Yo-Yo Ma ’76 as a neighbor.

However, the professor hasn’t let all of this get to his head. He still walks to work, and revels in inviting students to his house. “It’s important to live in the neighborhood,” he says. “When Harvard sold its houses in Cambridge, it relegated most professors to the suburbs—the most idiotic decision among the university’s many idiotic decisions. It’s devastating to the community.”

Dershowitz and Cohen managed to stay in Cambridge, and their low blue house is set back from the street, partially obscured by hedges and trees. The inside is as striking as the outside is unobtrusive.

When the door opens, the first thing that may catch your eye is a crouching man perched on the edge of a pedestal. The modern sculpture, found at a gallery in Brooklyn, is flanked by a vaguely totem pole-like antique drum, and a large stone Chinese warrior who sits guarding three dinosaur eggs. Next to it is a 4,000-year-old sarcophagus wearing a yarmulke made of Coca-Cola cans.

The walls are covered in art, including Dershowitz’s first purchase, an original Kandinsky. Dershowitz bought it for $25 on a Harvard Law School funded trip to Paris in 1965, and has been amassing art ever since. His love of art started earlier, when he was in school—sort of.  “I was a very bad high school student, so when I got suspended, which happened often, I would go to museums,” he explains. Clearly, the suspensions didn’t hold him too far back.

Dershowitz and Cohen have lived in their home for almost 20 years. Fortunately for them, their tastes mostly agree. “There’s a huge overlap in our Venn diagram, but we have some differences,” explains Cohen. “For instance, Alan tends to like rabbis. I also enjoy Judaic art, but there’s not the same nostalgia for the past—I’m from South Carolina, not Brooklyn.”

Though the living room’s walls are bright blue and red, it is almost impossible to see them. “It would take me 10 hours to go through everything in this room,” Dershowitz says. He’s not exaggerating. One of the walls features built-in display cases that hold antiquities and other priceless objects Dershowitz describes collectively as “tchotchkes.” Another wall houses a small Chagall, among other paintings. “I got a great bargain on that one,” Dershowitz brags. “It was for sale at a Jewish auction, but it has a crucifix in it—no one else wanted it.”

On the floor lays a black rug designed by Cohen herself to incorporate elements of the art in the room. Nearby sits a Coney Island bumper car and a sofa made out of the hood of a Cadillac. On a small couch sits a lifelike doll of an old woman, a craft market find. “Some people think it looks a little bit like my mother. But I like it because it always scares people when they first come in,” Dershowitz says. “They always think it’s real for the first minute.”  FM is guilty as charged.

On a small wall separating the living room from the hallway, set apart from many of the other pieces, is a framed letter on the importance of free speech written by Thomas Jefferson. Discovered tucked in a book owned by the letter’s recipient, Dershowitz, with his notorious penchant for indulging this particular right, found it so significant that he’s written a book about it: “Finding, Framing, and Hanging Jefferson.”

Blank walls do not exist in the Dershowitz house. The hallway at the base of the stairs displays Dershowitz’s collection of presidential signatures from every US president except Obama. Instead, Dershowitz has a business card on which Obama has handwritten his home address and phone number, pre-White House, tucked into one of the frames. “Some of them are specifically to me—obviously not Washington or Lincoln. Oh, and here’s a picture of Bill and me in synagogue,” he explains, pointing nonchalantly to the 42nd President, among various other Oval Office correspondences on the walls.

The stairs take us to the master bedroom and the couple’s home offices. “We keep some of our favorite pieces in the bedroom,” Dershowitz says.  “A couple Picassos, a Magritte, Modigliani, things like that.”

While the bedroom is uncluttered, Dershowitz’s office is just the opposite. Books, papers and frames are stacked in piles around the floor and on the desk, which spans two walls. On one wall is Warhol’s “Electric Chair,” a work Cohen deems too disturbing for shared living space. Next to it is a set of what Dershowitz calls “Me and whoever pictures.” He points to a smaller one. “Here’s one of my proudest pictures,” he says. “It’s of me getting arrested in Switzerland for confronting Ahmadinejad.”

In a display case, Dershowitz keeps some of his most prized rare books, including the earliest publication of the Declaration of Independence. A signed VHS copy of “O.J. Simpson: The Interview” sits on the same shelf.

On another side of the room, a program from a 1954 basketball game at Madison Square Garden leans against the wall.  Avi Dershowitz, playing for his yeshiva before the Knicks came on for the main event, guarded Ralph Lifschitz.  Today, Avi has become Alan, while Lifschitz has turned into Lauren. Next to it, in the middle of a pile of papers is a Fenway Park menu, including the “Dershowitz” pastrami sandwich.  Though he was born in Brooklyn, Dershowitz is a proud member of Red Sox Nation.  Picking up an 1865 plate used to make lithographs of Lincoln, Dershowitz declares, “In here, it’s just my junk.”

And what will happen to this “junk” if they ever move?

“I’m planning to retire in five years, and we won’t need this big house,” says Dershowitz.  “All I can say is that a lot of museum directors are going to be very happy.” Mazel tov.