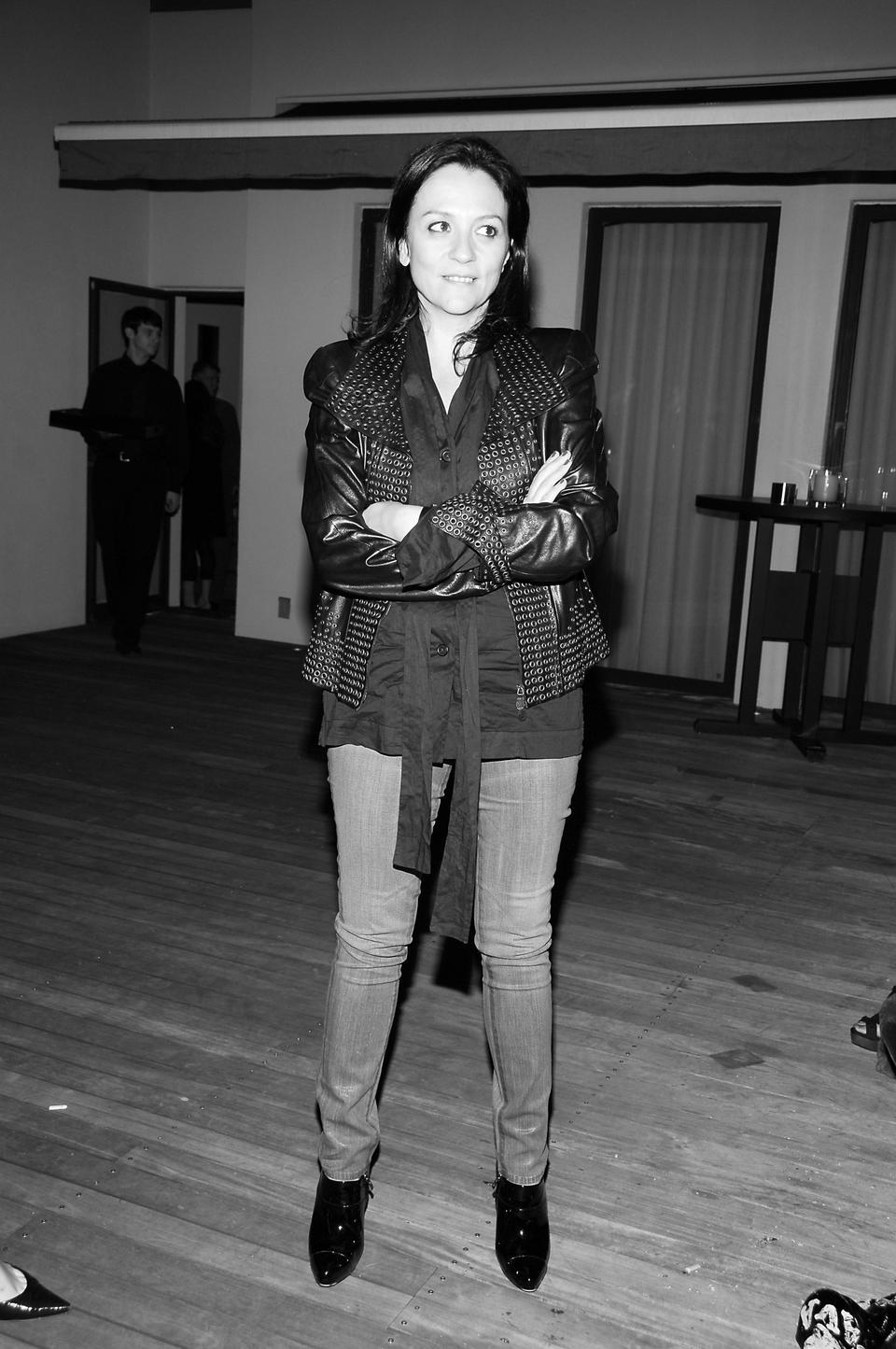 “If anyone really wanted to change the world, they’d bring in the fashion bitches,” writes Kelly Cutrone in her new ...
By Charles A. Lacalle

“If anyone really wanted to change the world, they’d bring in the fashion bitches,” writes Kelly Cutrone in her new book “If You Have to Cry, Go Outside,” to be released on Feb. 2.

This piece of information might startle the Harvard crowd, who isn’t known for sartorial savvy. The book outlines her tumultuous rise from homelessness to the fashion elite and serves as a guide for navigating an alternative career path. Famous for being the boss from hell of Lauren Conrad on “The Hills” and Whitney Port and her cohorts on “The City,” Cutrone’s own show on Bravo premiered this Monday.

I spent an afternoon with Kelly in the New York City office of People’s Revolution, the public relations firm that she founded. When I first met Kelly, I was carrying a cupcake. Her first words to me were “No one eats solid food anymore. That’s so 90s.” I immediately thought back to the episode of “The City” in which Kelly descends upon a young girl for being too skinny, and I realized that she was just being friendly.

Before the interview begins, I watched her put Donald Trump in his place. The Donald was angry that Kelly dissed him in her new book about his support for Mike Tyson after Tyson was accused of rape. As Trump tried to deny her accusation, she first screamed “motherfucker” and then made one phone call to a very high profile former business partner to corroborate her claim. Upon confirmation, her interns cheered, and Kelly turned to me and said, “Let’s do this.”

1. Fifteen Minutes: Your new book is titled “If You Have to Cry, Go Outside.” Have you ever shed a tear on the job?

Kelly Cutrone: I usually cry at least twice a year. Usually at some point during fashion week. Sometimes it’s out of joy or sheer frustration, but sometimes its because of being ruthlessly and needlessly attacked. I cried out of gratitude once.

2. FM: Who is the target audience for your book?

3. FM: The book is supposed to be a guide for girls to make it in the real world. Does it mostly speak to the PR industry, or did you try to include advice for any career?

KC: It’s not really about PR. There are a lot of fashion stories about the fashion industry. But it’s mainly a book to make people realize they’ve been programmed. I talk a lot in the book about how mothers, the life-bringers themselves, sing songs to their daughters like, “First comes love, then comes marriage, then comes a baby in a baby carriage.” It’s excessive.

You have to be skinny, pretty, make good grades. Says who?

4. FM: How does this apply to kids at Harvard?

KC: Kids at Harvard, I’m sure there are some that are living their dream, but there are people there experiencing someone else’s dream. And if there are people around you who aren’t listening to you, who don’t believe that you can manifest what it is you are dreaming, or don’t want you to, then you should get the fuck away from them.

It’s a book about deprogramming, about intuition, about taking risks—especially when you are young.

5. FM: You also have a new show on Bravo, “Kell on Earth,” that features your role as a mother. Has your daughter become a celebrity at school since filming began?

KC: The LA Times has said that she had the best line in the first episode when she says, “Why should I bother getting dressed up if you are going to put me in the third row? Everyone knows that no one can see you from the third row.” Her friends know she is on TV, but she’s a NY private school kid. Her friends are on Broadway.

KC: I’m sure on some days it is, but I’m sure on some days it’s absolutely divine. We usually start with about twenty interns and end up with about five or six. These are the ones really serious about what they are going to do. They go through this growth process. They trust me. They know I actually care about them and I’m here to teach them something. They are like soldiers. I’m not going to sit there and cuddle them. I’m not going to make them think that the fashion world is something different from the brutal, fast-paced, hard-working world that it is.

7. FM: Why do you insist that your employees wear all black?

KC: I have a rule list of things you can and can’t do. The all-black rule is for fashion shows and events. It’s like a private school. We don’t want self-expression at our shows. Do you think Martin Margiela wants his PR team to wear Cavalli? I don’t think so. Black is non-descript. You don’t know if it’s GAP or Yohji.

8. FM: Few students from Harvard seem to get into the fashion and entertainment world. What’s the best way to break into it from college?

KC: It’s to not apply in May. Fashion has its own calendar. Plan on interning between May and August 15. It’s competitive. It’s like the entertainment industry.

9. FM: It’s also internship search season for us. You’ve mentored interns for years. What should we be wearing to interviews?

10. FM: What do you think about Harvard?

KC: It’s the ultimate brand. The joke is that it’s hard to get in, but once you get in it’s a piece of cake. Harvard is a branded education. It’s like wearing Cartier. Harvard kids go to the Harvard Club, then they’re part of the alumni fund, and they love seeing other Harvard people. It’s like having twelve Louis Vuitton steamer trunks and seeing someone else with the same thing. It’s the brand-brand-diggity brand.

FM: Would that prevent you from hiring from Harvard?

KC: No. Harvard gives you confidence. It’s like being in a Range Rover versus a Hyundai. Is it going to get you there faster? No. Does it feel better along the way? Hell yeah.

FM: What do you think about the idea of a Harvard-inspired fashion line?

KC: Shut up. They are shameless branders. I like it.

FM: Even though it’s preppy?

KC: Definitely. I represent things that I wouldn’t wear. I wear black.

12. FM: You’ve recently said in an interview that the one thing you’ve learned from your interns is that you don’t want to send your daughter to college. Even to Harvard?

KC: The funny thing is, she told me she wanted to go to Harvard once. I asked her why, and she said, “Because all my friends do.” She also asked me, “Why don’t we have a mezuzah?” These are the questions that six-year-olds in New York ask.

13. FM: What do you think of the trend of celebrities who are taking the helm as creative directors at fashion houses, such as Lindsay Lohan at Ungaro and SJP at Halston Heritage?

KC: Big mistake. Well, I don’t know about Sarah Jessica Parker, but Carrie Bradshaw and Sarah Jessica are not the same person. Patricia Fields was putting together the clothes for Carrie.  With Lindsay, we were all shocked. And the collection was such a failure that we could not believe they kept her on.

The old school tactics of exclusivity, of not letting anyone in, of this great Wizard of Oz behind the curtain. It’s all overkill for fashion houses.

14. FM: Has your PR firm People’s Revolution had to change its strategies at all with the recession?

KC: We’ve done brand strategy forever. Back in the day, a publicist’s job was to say, “You give me a product and I’ll get it attention.” But you can’t get a shitty t-shirt in vogue. We’re like the anti-PR PR company. Companies come to us for new brand strategy and reinvigoration or restarting. To call ourselves only PR is limiting.

15. FM: With all of your recent ventures, do your clients ever get jealous that you’re getting more press than they are?

KC: Yes, but you don’t see people yelling at Obama saying he’s on the news too much. The more power you have, the more effective you are. It’s like Angelina. Look what she’s done for Cambodia. Or Oprah. You get more done.