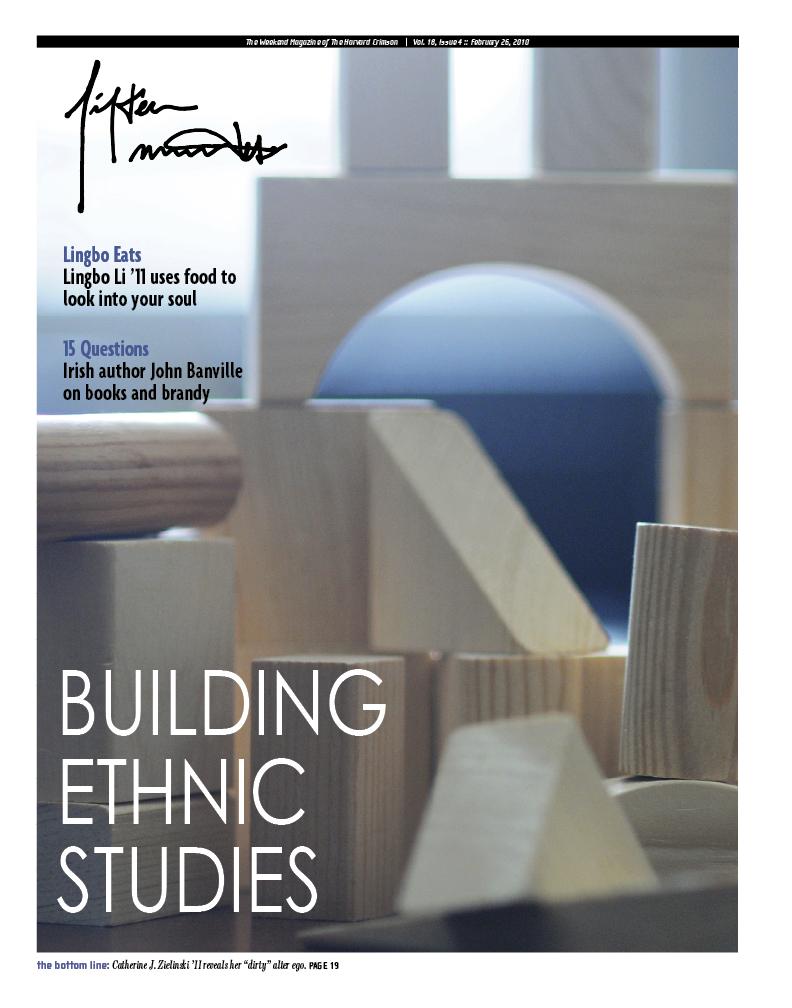 Although she grew up in Arizona, where ethnicity and migration are hot political issues, Jessica Roman-Salazar ’12 came to Harvard ...
By SOFIE C. BROOKS

As she attempted to choose a concentration, Roman-Salazar knew that her interests lay in working to help underrepresented ethnic groups. Looking for classes and disciplines that interested her, Roman-Salazar tried out several possible concentrations, including the Latin American Studies track of Romance Languages and Literatures. However, she wasn’t satisfied. Roman-Salazar felt that while the requirements for Latin American Studies focused heavily on the politics and social dynamics within Latin America, she really wanted to study these groups after they had immigrated to the United States.

Roman-Salazar’s plans for the future include law school and possibly a career in government or advocacy. Either path she chooses will involve efforts to alleviate the ethnic tensions that exist between residents of Mexican descent and Mexican immigrants who have come to the country illegally.

“I want to work to meet the needs of these different communities,” says Roman-Salazar. “Although they seem similar, they have different ways of living and are really very different. There are lots of leaders in the community that have not understood the relationships between the different kinds of Mexican and immigrant communities in Arizona.”

While Roman-Salazar was able to identify a few courses centered on issues of migration or ethnicity within the United States, she felt that the College’s offerings did not quite fit with her interests.

“I was surprised by the lack of diversity,” she says.

These concerns would eventually lead her to become involved in the creation of a new Ethnic Studies Secondary Field, which allows students such as Roman-Salazar to focus on ethnic groups within this country and on a transnational level.

Around the time that Roman-Salazar was looking into classes that focused on the issues of Hispanic Americans, she became political chair of both Fuerza

Latina and RAZA. Along with these positions, Roman-Salazar inherited the responsibility of advocating for courses in Latino-American studies—a field of interest that would ultimately be encompassed by the ethnic studies secondary.

Previous members of both clubs had been part of study groups for a few years to gain support for such a field, but their progress picked up dramatically last spring. About a year ago, students such as Roman-Salazar began meeting to collaborate with professors in African-American Studies, History, and other disciplines and to discuss the prospect of an ethnic studies program at Harvard.

As part of this study group,  Roman-Salazar helped draft a policy paper that was nearly 30 pages long, explaining what members hoped the program would look like. The five sections of the paper not only included an outline of what they envisioned down the road, but also compared Harvard’s current offerings in ethnicity and human rights to those of other Ivy League schools. But the group ultimately decided not to base its proposal off of any other school’s curriculum, citing the limited resources available for the creation of new programs.

“We looked at a lot of schools, but since we were limited in how far we could go with what we were looking for, it was better for us to start from smaller steps,” Roman-Salazar recalls.

The group worked with a realistic cost estimate in mind, honing in on an initial vision for a committee of professors in other departments who would be willing to teach classes applicable to ethnic studies. They presented their work to the Committee on Undergraduate Studies, which ultimately approved the new committee and the secondary Field, and with the help of a group of alumni donors, the Ethnic Studies Secondary Field was born in December 2009.

FIRST, ABOUT THE SECONDARY

While it is currently experiencing a resurgence at Harvard, the field of ethnic studies has existed since the protest era of the 1970s. For a long time, however, ethnic studies existed only on the fringes of a liberal arts education, criticized for its radical political connotations and its supposed lack of academic rigor.

Several years ago, Harvard had an ethnic studies program, but for reasons that are not clear to even some of the most involved faculty today, it altogether faded away. However, continued student and faculty interest in ethnic studies coalesced in new conversations and, ultimately, the formation of the secondary field and Committee on Ethnic Studies this year.

“A year and a half ago, we wanted to reinvigorate it because it seemed like there was a lot of student and faculty interest in the project,” says Diana Sorensen, Dean of Arts and Humanities, who also serves as a professor in Comparative Literature and Romance Languages and Literatures.

Now, the final product of many months of hard work is reflected in the online Student Handbook under the “Fields of Study” section. The Ethnic Studies Web site boasts four tracks that will allow students to gain “an opportunity to pursue sustained, interdisciplinary study of issues related to ethnicity, migration, indigeneity, and human rights, particularly in Asian American/Transpacific, Native American/Indigenous, and US Latino/American hemispheric topics, with an American focus as well as a transnational one.”

While each track will eventually have its own selection of courses, as of now, students do not need to declare a particular track within the field. However, all students interested in pursuing an Ethnic Studies Secondary must take one of five “portal courses” as an introduction. The Committee on Ethnic Studies hopes that portal courses will help to unify the diverse range of topics within the field by providing an overview of the history of ethnic conflict, human rights, and other issues of ethnicity.

As with all the courses that count for the secondary, portal courses are not listed under the heading “Ethnic Studies.” Instead, these classes are taught by

professors who belong to departments ranging from History to Anthropology. The Committee also brought in two visiting professors: Denise Khor, a recent Ph.D. from UC San Diego and Hua Hsu, a professor at Vassar College and author of “The End of White America?”, the cover story for The Atlantic Monthly in early 2009. Although both visiting scholars are technically based in other departments—History and English, respectively—their courses are directed toward the curriculum of the secondary field.

“Faculty are not appointed to Ethnic Studies, but if you have an appointment in say, the Department of English, and you’re interested in Native Americans, then...your courses are available to people who are interested in ethnic studies,” says Sorensen.

With the curriculum still being set, the only portal course offered this semester is “Ethical Reasoning 11: Human Rights: A Philosophical Introduction,” taught by Mathias Risse, a professor at the Harvard Kennedy School.

In the future, portal courses will be taught by various faculty members on the Committee of Ethnic Studies. For example, Werner Sollors, Ethnic Studies Chair and professor in African and African American Studies, plans to teach “Literature of Migration and Ethnicity: The Case of the United States”, which will also count for the Aesthetic and Interpretive Reasoning.

“With this effort, we tried to include very different groups,” says Roman-Salazar. “Maybe it was just that we brought together the right level of enthusiasm and student involvement and faculty involvement working together.”

Athena Lao ’12, who attended faculty meetings and advocated on behalf of the program along with Roman-Salazar, acknowledges that the current curriculum may be deemed too far-reaching in scope, but is pleased nonetheless with the outcome of the program.

“It could be argued that maybe it’s a little too broad now, but at least we will be able to cover the things like Asian American studies or Native American studies that people have been fighting for,” says Lao.

In addition to representing the interests of a variety of minority groups, Ethnic Studies extends its appeal even further by incorporating studies of human rights into its curriculum and designating it as a distinct track.

Director of the Harvard University Committee on Human Rights Studies Jaqueline Bhabha has been a leader in developing the human rights aspect of the program. She became involved in the Ethnic Studies Secondary in order to create an organized grouping for all human rights courses at the College.

“What we decided to do was to try to include within the Ethnic Studies rubric those courses which otherwise had been somewhat free floating,” Bhabha explains, adding that while there could have been a Human Rights Secondary Field as well, it seemed to enhance the rest of the curriculum.

“The intellectual coherence of the project eventually made itself clear,” says Bhabha.

THE FUTURE OF THE FIELD

According to Stephanie Macaris Alusow, who works in the Special Concentrations Office and as an assistant to Professor Sollors, two students have officially declared Ethnic Studies as a secondary since its inception in December, but many more have expressed interest.

“The first week I probably had about 12 students come to ask about the Secondary Field...the students seem very interested,” she says.

Sollors also cites faculty participation as a gauge of the program’s success so far.

“We have a very large group of faculty members working with us, and that is evidence of positive feedback,” Sollors says.

The next project for the Committee is planning an Ethnic Studies conference which will include representatives from several schools in the Boston area. The event, slated for April 9, hopes to incorporate student papers, alumni panels, and a keynote speaker.

“The main theme of the conference is public art and student performance and how Ethnic Studies is represented in the public sphere and through performance,” says Lao. “It’s really broad; we just really encourage anyone who thinks that their work could fall into the field to submit it.”

While many people involved with the program are pleased with the strides represented by the approval of the Ethnic Studies Secondary, they still recognize the amount of work that remains to be done.

Bhabha expressed her interest in establishing a research or internship program through the Committee to further student involvement, while longer-term goals include building a full concentration and even an Ethnic Studies Department.

“In the future, I’m hoping, when the financial situation is a little better, we can start the process,” says Lao, who hopes to ultimately see those developments.

To ensure the longevity of the program, alumni have been collaborating with faculty and administrators on the Committee to create a professorship in the field of ethnic studies. Such an endowment would last for decades, ensuring the position of a full-time and dedicated ethnic studies professor.

For now, students, faculty, alumni, and administrators are taking a moment to pause and look back on all they have accomplished.