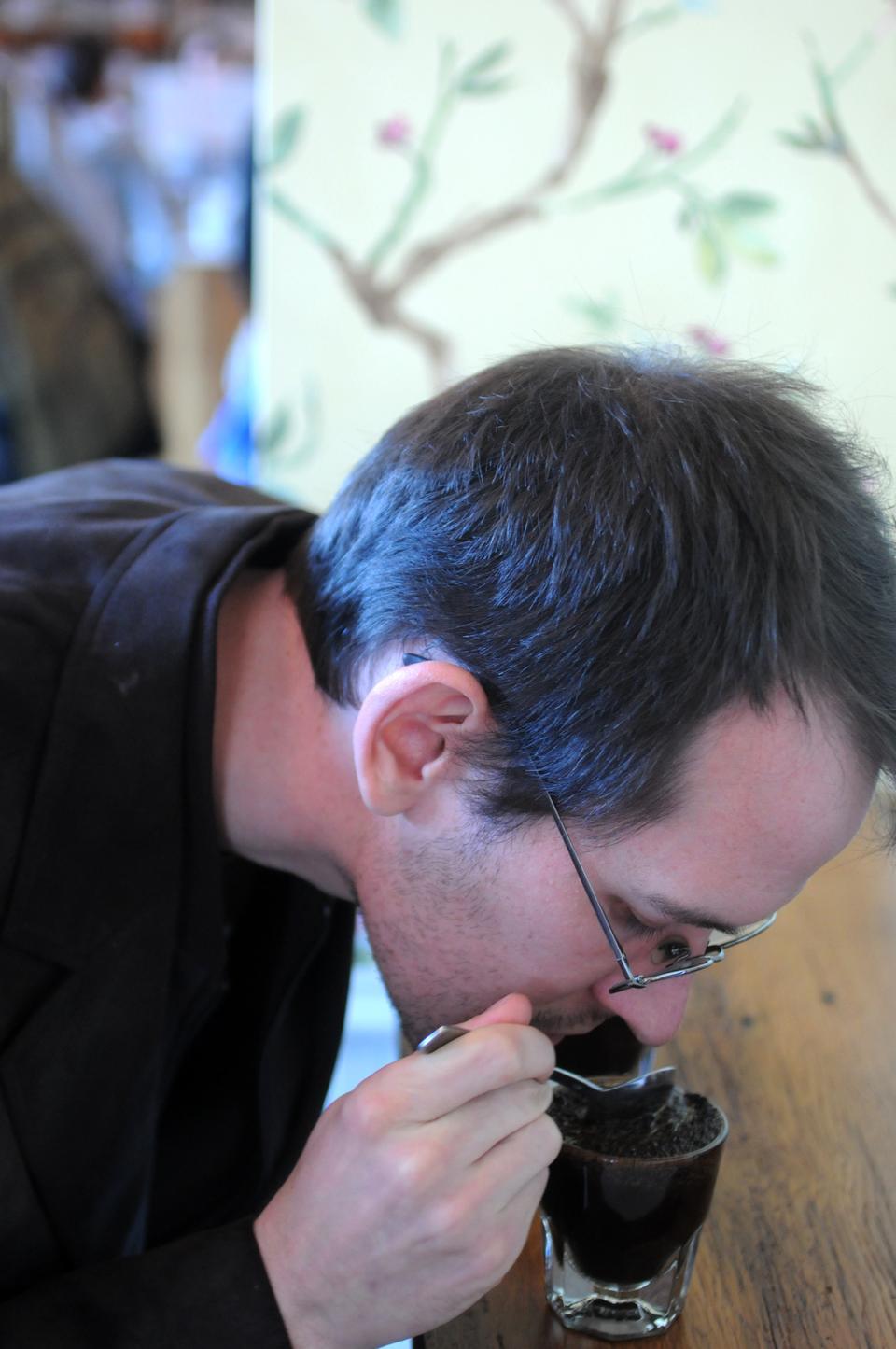 With a metal spoon and the steady hands of a surgeon, Jaime Vanschyndel, general manager of Barismo, gently pushes aside the coffee grounds that have floated to the surface of the cup. He leans in close, his nose mere inches from the surface, and inhales. The verdict? Smoke, like “an ash tray that doesn’t get cleaned out,” he says. All we saw was mud.
By Rachel Gibian and Nicole J. Levin

With a metal spoon and the steady hands of a surgeon, Jaime Vanschyndel, general manager of Barismo, gently pushes aside the coffee grounds that have floated to the surface of the cup. He leans in close, his nose mere inches from the surface, and inhales. The verdict? Smoke, like “an ash tray that doesn’t get cleaned out,” he says. All we saw was mud.

At Hi Rise coffee house and bakery, one of many Cambridge area cafés supplied by Barismo, “a wholesale roastery with a kiosk in the front,” Vanschnydel is walking us through the subtle art of coffee cupping.

It doesn’t take much coffee savvy to grasp the process. By brewing identical quantities of beans in exactly the same way, anyone can begin to distinguish the subtle differences in aroma, sweetness, body, mid-tone and acidity that Vanschnydel describes in such evocative terms as “musty,” “acrid,” “toasty,” and “green apple jolly rancher.”

The process is this:

1. Brew eight grams of coffee and about five ounces of water, and let it sit for four minutes.

2. With the back of a spoon, break through the thin layer of coffee grounds floating on the surface—the crust—and smell the aroma.

3. After letting the coffee cool until it reaches room temperature, taste. The defects in the beans begin to appear as the cup cools.

The coffee bean haul for our taste test included an eclectic assortment of seven different bean varieties served around the Square.

The Clover coffee, otherwise known as “Sample A,” had the effect of a punch to the back of the throat, which Vanschnydel translated as a “bittery chocolated” taste. The second sample, from Crema Café, struck us as somewhat stale. The third, Illy, which is brewed in many locations around the Square including Finale, was by our definition bitter, and by Vanschnydel’s “chocolatey.” The fourth coffee sample was more complex; Vanschnydel used the words “berry,” “dark chocolate,” and “tangerine citrus” to describe it, and was able to correctly recognize this blend as his own, despite the double-blind nature of the taste test.

The Starbucks brew was rather bland—in cupping language, “it lacked body” and “was not developed.” Peet’s house blend evoked a similar response, which Vanschnydel described as “inoffensive.” By the final cup of coffee, the French Press house blend from Algiers, we did not need any help from our guide. The roast was so dark that it felt like arsenic.

Vanschnydel’s blind guesses at the origins of each sample were remarkably accurate. From the first whiff, he could already begin to distinguish between the samples that were blends of beans from different regions, as opposed to those of a single location.

Vanschnydel is a fervent proponent of the truly local, direct trade coffee. By ignoring the identity of the actual coffee farmers, typical house blends obscure the consumer from understanding unique regional aromas, which in turn leads to a cycle of coffee-ignorance. “Assuming customers don’t care [where their coffee comes from],” Vanschnydel points out, “you get customers that don’t care.”

In our case, it may be less a case of apathy then of coffee illiteracy. After all, when you’re drinking coffee as an excuse for frothy milk and flavored syrups, you don’t often look for a coffee bean that tastes like citrus or jolly rancher.