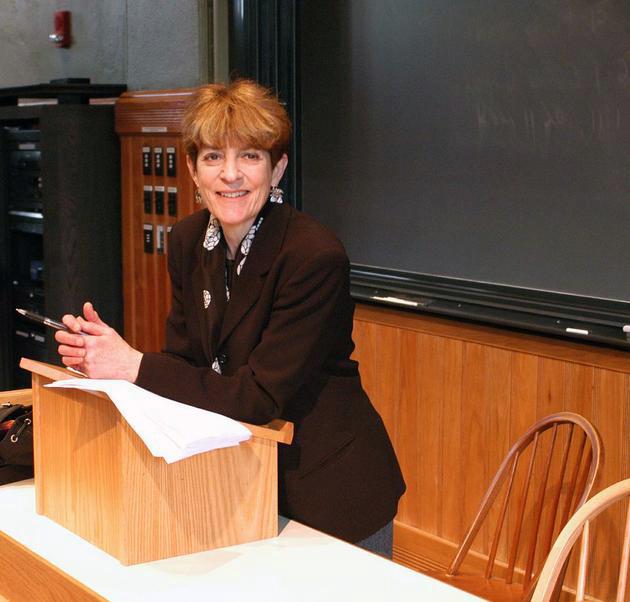 When history Professor Nancy F. Cott took the stand in January 2010, she was stepping into a highly contentious arena that had drawn California’s governor and most ardent supporters of gay marriage into a battle over the legality of Proposition 8, which banned same-sex marriage in that state.
By Tara W. Merrigan

When history Professor Nancy F. Cott took the stand in January 2010, she was stepping into a highly contentious arena that had drawn California’s governor and most ardent supporters of gay marriage into a battle over the legality of Proposition 8, which banned same-sex marriage in that state.

Cott was called as an expert witness by the plaintiffs’ lawyers, who had flown her, one of the foremost historians of marriage in the United States, cross-country to refute Prop 8 supporters’ claims to fact. Cott is in favor of same-sex marriages. She reached this conclusion, she says, “as a result of my historical research and study.” She argues, “[I]f gender symmetry and equality and the couples’ own definition of spousal roles are characteristic of marriage, then same-sex couples seem perfectly able to fulfill those roles.”

In a time when same-sex marriage had been legalized in six states and was being discussed around the nation, Prop 8 was a local trial with seemingly national ramifications. Everyone was watching.

Cott knows more about marriage history in the United States than perhaps anyone alive. The other expert witness brought by the plaintiffs, Yale Professor of History George Chauncey, had been Cott’s dissertation advisee when she taught at Yale prior to coming to Harvard.

As Cott took the stand, Theodore J. Boutrous, Jr. of Gibson, Dunn & Crutcher of the plaintiffs’ legal team took the floor. What did Cott think, he asked, of the assertion made by one of lead defense attorneys Charles J. Cooper’s opening remark that “the purpose of the institution of marriage, the central purpose, is to promote procreation and to channel naturally procreative sexual activity between men and women into stable and enduring unions”?

“It rather reminded me of the story about the seven blind men and the elephant,” she said to the jury and packed courtroom, “in that each of them is feeling the animal at some side of it; and the one that feels the trunk says, oh, this animal is just like a snake.”

In other words, Cooper’s definition of marriage, Cott thought, was so limited as to be inept.

In her testimony responding to Boutrous, Cott easily recalled dates, facts, historical accounts, and past precedents. Cott presented the anti-miscegenation laws, which banned white people from marrying minorities, as a historical parallel to discrimination against lesbians and gays. Questions ranged from interracial marriage to husband-wife gender dynamics to procreation’s role in marriage. The content of her testimony harkened back to “Public Vows: A History of Marriage and the Nation,” her most recent book, which was met with critical acclaim.

When the defense was handed the floor, though, the tenor of the questions shifted. Questions from Boutrous seemed like softballs compared to defense attorney David Thompson’s cross-examination.

Thompson dug into Cott’s past, scrutinizing her past testimonies from other trials, statements she had made for the media, her previous academic work (even from 34 years past), and her personal donations to marriage-related non-profits. Thompson was doing his best to present Cott as an impassioned gay rights activist, biased and unreliable, rather than the neutral and objective scholar whom Boutrous had presented her to be.

Cott had worked hard to maintain the appearance of impartiality. Cott—like many other scholars of hot button issues—skirts the line between the role of activist and public historian, and sitting on a witness stand, those two roles converged.

Thompson baited her, trying to discredit her testimony by drawing out her personal feelings about marriage equality.

An example: “You think gays and lesbians should have the right to marry, correct?” Thompson asked.

“I have come to that view from my research and study of the history of marriage, yes,” Cott returned.

“And you feel that you’re somewhat between a neutral party and an advocate, correct?” he continued.

“I would call myself not an advocate, but someone who has come to a personal opinion as a result of my historical research and study of this matter of the history of marriage for quite a number of years now,” Cott replied.

“Let’s see what you said during your Iowa deposition,” Thompson said, drawing from the past. “The next page, page 59, top of the page, lines 1 through 4. You said: ‘So I feel I’m somewhat between a neutral party and an advocate, in that I feel I’m led by my particular historical expertise to feel that this is the direction.’”

Thompson moved on to his next point without allowing Cott to respond. “Now, you’ve put in amicus briefs and signed on to amicus briefs in New York, New Jersey, and Washington State; is that correct?”

“Historian’s briefs, that is right,” she clarified.

“And you weren’t compensated for your work in those cases, were you?”

Media coverage of the trial—and there was much of it—reported that over the course of Thompson’s cross-examination, Cott was becoming increasingly impatient.

“Okay. And you volunteered your time because you viewed this as an important civil rights issue, correct?”

“I volunteered my time because I think it’s very important for historians to contribute to public-policy discussions.”

Retrospectively, the plaintiffs deemed Cott’s testimony a success. “She was a tour de force,” Boutrous wrote in an emailed statement. “[H]er testimony was powerful, compelling and the cross examination didn’t lay a glove on her.”

The defense, also, deemed Cott’s testimony as having supported their own cause: “She never explained why some restrictions are O.K. and some are not,” Jordan Lorence told The New York Times. “She never explained why a polygamist group can’t make the exact same argument that they’re legally discriminated against despite having a loving, stable family—except that a lot more people oppose polygamy.”

Cott thought the testimony she gave was objective and well-researched, but also noted that “no one can be completely objective about anything. One can be well-reasoned, logic, and fair, but there is no such thing as absolute objectivity.”

On campus, two years later, Cott deals with the same material, but in a much calmer environment.

With her right elbow perched on the podium, her hand dangling off to the side, Cott lectures about gender in the post-World War II period to 40 students in her United States in the World course, “Men and Women in Public and Private in the Twentieth Century.”

She has taken an unusual approach to the era and focused her class on men and masculinity rather than the oft-harped upon “feminine mystique.” Pressing her thumb and forefinger together, she gesticulates for emphasis as she explains how Cold War anxiety influenced gender roles and the domestic sphere. In her analysis, she uses almost every source imaginable: quotations, statistics, advertisements, photographs, diary entries, and personal letters. She rarely references her notes.

At the podium, Cott is at ease. She wears simple black garments, and she runs her hand through her short brown hair every once in a while as she gazes out the window, though she never drops her lecture or train of thought.

“I do believe that passion can coexist ... [with] reason and logic,” Cott said. “In the classroom, I have a responsibility not to appear partisan. One can make it clear, especially in the case of the Lavender Scare, that a lot of persecution happened without having to yell or scream. The facts of the event make it clear enough.”

She tries to make eye contact with each of her students in lecture, who type furiously away on their laptops (whether they are taking notes or chatting on Facebook, she cannot tell). Her tone remains steady, even when she discusses injustices such as the purging of gay Americans from government positions during the infamous “Lavender Scare.”

Cott’s passion for the subject matter has been a source of inspiration for her students, who say that she balances conviction and objectivity.

“I have found Professor Cott’s courses to be the most inspiring that I’ve taken at Harvard,” Lilly B. Corning ’13, who is enrolled in “Men and Women” and took “History of Sexuality” with Cott last semester, writes in an email. “In addition to giving meaningful context to daily life, her classes have entirely changed the way I think about sexuality and gender.”

“As a historian, she does provide unbiased historical background for the subjects. Yet, perhaps due to her rhetoric and passion, her classes have inspired me to become more concerned about women’s rights.”

She ends her lecture and opens herself up to more questions, but this time the questions seek out the vast knowledge she has at her command rather than her motives.