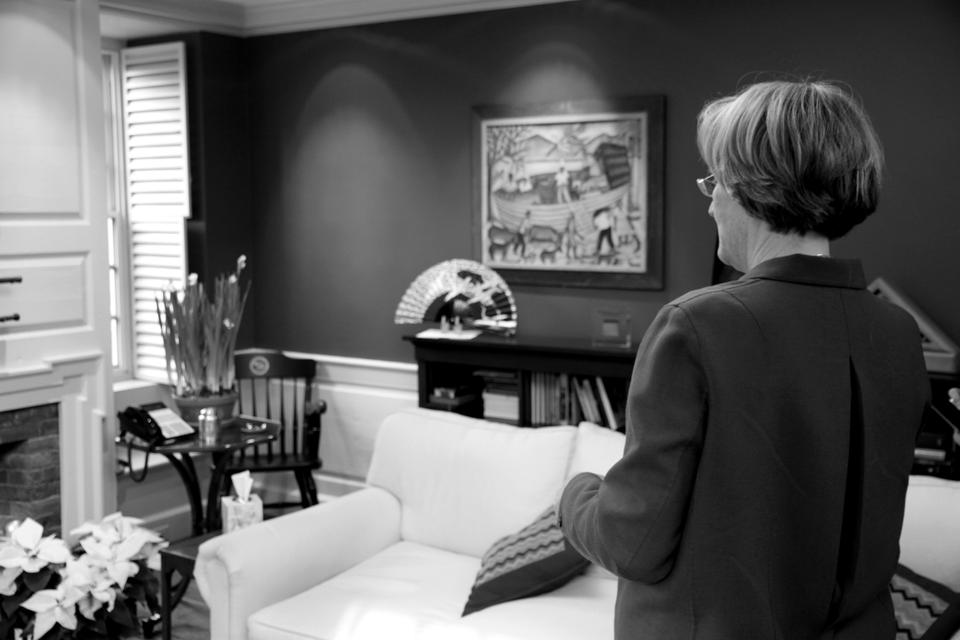 The Crib: The bottom floor of Mass Hall
By Jyotika Banga

The Crib: The bottom floor of Mass Hall

The Vibe: Like a classic New England home, with lots of white wood and brick, but with pieces of modern, ethnic-inspired flair. Completed in 1720, it’s surprisingly sturdy.

The Price: With artifacts as old as Charles William Eliot’s 19th-century desk, let’s not even go there. Just know that buildings just outside the Yard cost upwards of $1 million.

Entering the office’s lobby, the first thing that strikes you is how unassuming the entrance is for the number of important visitors who must pass through the space each year. The room is small, colonial, and warm. The three unupholstered chairs are light wood, and the small coat closet, where we hang our protective winter gear before University Spokesperson John D. Longbrake leads us through a set of glass doors down a long hallway to Faust’s primary office, is as mundane as they come.

Faust’s office continues to surprise—no ancient books, no dim lighting, none of the intimidation-inducing effects experienced by the Winklevoss twins in “The Social Network.” The office is a curious and well-balanced mix of furniture from former presidents, paintings and sculptures rented from Harvard’s collections, and Faust’s own belongings, from gifts from the U.S. Secretary of the Navy to a framed picture of her husband and daughter. The first piece of furniture you notice is the desk, an old mahogany-colored piece (Faust was unsure whether the wood was indeed mahogany) entirely covered with books.

“This desk belonged to Charles William Eliot—he was president from 1869-1909—and every president since then has used this in their office,” Faust says. (Maybe the office is intimidating for those who know the history of the furniture?)

The rest of Faust’s office is an eclectic mix of pieces collected in her travels and from Harvard’s museum collections. Above the fireplace hang some unconventional pieces of decoration—a textile from Zaire and two walking sticks, one that is African and one that is Native American. As a historian of the American South, Faust remarks that she learned all about the Southern tradition of carving walking sticks during her studies, and these pieces remind her of her academic passions.

She then proudly points out a Liberian statue of a gigantic spoon taken from the Peabody Museum. “The spoon statue is supposed to be in the dwelling of the most hospitable woman in the village,” Faust jokes. “That’s why it’s in here!”

Next to the statue lie two pieces that are particularly close to her heart—an intricate fan decorated with the Harvard shield and images of cranes, and a folded American flag. The fan was presented to her on a trip to Japan. “It was commissioned,” Faust explains. “It shows that the Japanese wanted to connect with and build a relationship with Harvard—our shield and the crane are placed side by side.” The flag was presented to her by the Reserve Officer Training Corps class of 2010. Faust displays other objects that remind her of Harvard’s students—in the hallway leading to the main office she has a rotating exhibition of student art, and on her computer table behind her desk she has an autographed picture of last year’s football captain, which he gave to her at the end of last year.

But, though much of her office decor is steeped in history, Faust has definitely put her own quirky mark on the space. “The furniture is much the same—the rug, desk, and chairs have always been here, but I moved everything around and added some more seating” to make it more comfortable, she says. Two soft couches are decorated with multi-colored pillows that Faust bought on Newbury Street during her days as the dean of Radcliffe, and her computer table is covered with personal mementos, from pictures of her family to the first-pitch baseball she threw at Fenway Park. Also framed is a  picture of her with Paul McCartney.

“My days are long. I am on the go from 7:45 a.m. to dinner, and this office is my home base for a good 12 hours,” she says. Faust spends a lot of time in her office, but how does she keep track of all she has to do as Harvard’s president? Not in the way you might expect—she writes herself reminders on Post-it notes and places them around her computer screen, counting on the bright hue of the paper to draw her eye to the tasks.

The last piece that Faust shows FM is the coffee table in between her two couches. As Faust opens it to show us that the table is actually an old, dark wood chest (which Faust guesses to be a dowry chest), she exclaims in surprise: “This coffee table is filled with alcohol! Oh no, don’t tell anyone that.” It’s okay, Drew. Even the president of Harvard has to have fun!