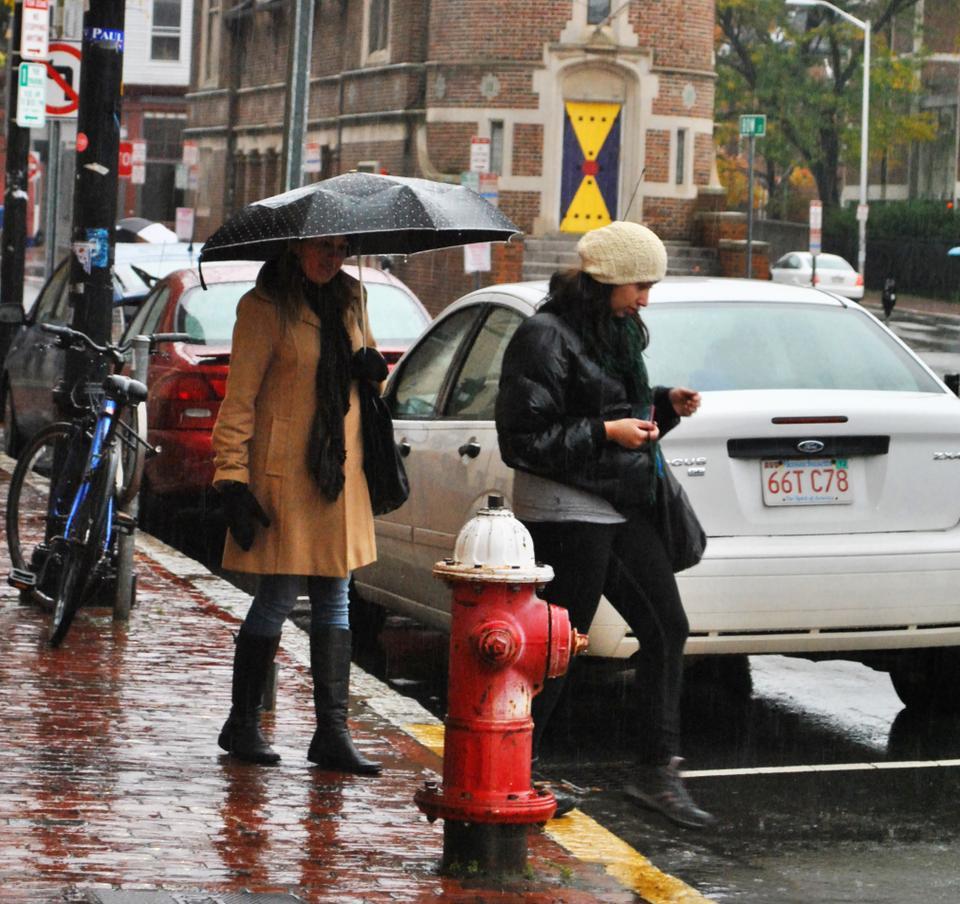 These two gals came equipped with both coats and cameras. Even Cambridge’s all-day rain won’t these tourists from enjoying Harvard‘s campus.
Advertisement
Advertisement

I’d stay home and babysit my sister while mother would go off and sweat on sad middle-aged men who weren’t my father. The sweat would bead like rain drops on a car window.
By Noah B. Pisner and Andrew A. White

A note to our interns: Hey guys, you’re doing great work as interns for The Harvard Crimson’s Crimson Weatherboard. That being said, it would really be helpful if you guys could have studied last week’s last week’s weather before we started reporting on last week this week. A written report on next week’s last week’s weather will be required, with the intention that I can print it here and hopefully won’t have to do any work. Extra credit: Check out some weather forecasts from other, more “reputable” stations, and see how they compare. Credit will be given based on whether or not you like me more than them.

Anyway, this week in last week’s weather we talk about the weather from this week:

We had a full moon recently, but luckily there were no wolf attacks among afflicted were-students. Unless of course one escaped from the zoo again—like the one that mauled my sister’s face when she was still an infant.

Mother had to spend all of my college savings on my sister’s reconstructive surgery, which didn’t do much for my sister but made mother feel a lot better about her boobs and nose. She managed to save up again by getting a second job working as a stripper. I’d stay home and babysit my sister while mother would go off and sweat on sad middle-aged men who weren’t my father. The sweat would bead like rain drops on a car window.

Speaking of which, it rained this past week. At least that’s what I figured after hearing a guy in Lamont say, “Hey, damn, it’s raining guys,” before checking out a limited edition copy of “Made to be Seen: Perspectives on the History of Visual Anthropology.” He said it was a “good read” and recommended I read it sometime. I said “I will.” I won’t.

As the water drops down, the umbrellas rise up, shrouding the visages of their human caretakers and shielding them from nature’s might with their artificial flesh. Only the wind can stop them now, blowing so hard it snaps their fragile spines like a helmetless motorcyclist, as it seems no other person on earth is willing to cast them down from their position of power. One day their time will come. Until then, I wait.

We never did fix my sister’s face.

Aggregate Score: “Threeve” out of 10.

Interesting weather fact of the day: Did you know Disney Channel star Raven-Symoné was once featured in the Crimson Weatherboard’s Weekly Weather Review? Tune in next week to find out whether or not this is even true!