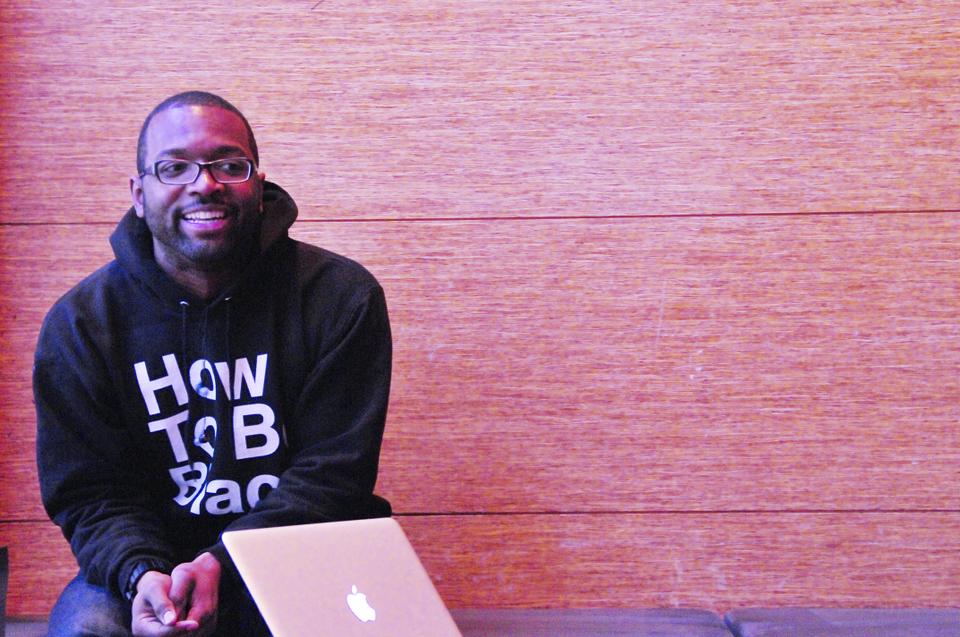 Baratunde Thurston, on Monday, smiles as he shares some insight to his approach on writing his book "How To Be Black". As a satire fanatic he enjoys the reactions that his book gets when people see the title.
Advertisement
Advertisement

Fifteen Minutes sat down with Baratunde R. Thurston ’99, author of How To Be Black, and a former news and photography editor of The Crimson. He is the digital director of The Onion and co-founder of “Jack and Jill Politics”.
By Julia E. Kete

Fifteen Minutes sat down with Baratunde R. Thurston ’99, author of How To Be Black, and a former news and photography editor of The Crimson. He is the digital director of The Onion and co-founder of “Jack and Jill Politics”. The following interview took place in the Middlesex Lounge in Cambridge, one stop of many on his national book tour.

1. Fifteen Minutes: What house were you in? What was your concentration?

Baratunde R. Thurston: I lived in Lowell House, though I never lived in Lowell proper; I lived in Claverly Hall the entire time. It just was like an apartment, it was a little cooler, it had the janky elevator. I love Clav. I was a philosophy concentrator.

2. FM: What activities did you participate in as an undergraduate at Harvard?

BT: In terms of major activities I did, [The] Crimson was very high on the list, [also] Harvard Computer Society. I was a big nerd, and a geek. I was a very active member of [the] Black Students Association, and the Black Men’s Forum...and the Signet—that was later in my career.

3. FM: Your recent book is part satire, part autobiography, part self-help. How much of each would you describe this book as?

BT: Anything you thought was hilarious was actually very true and painful, anything you thought was true and painful I just made it up for dramatic effect. No—it’s anchored in an autobiographical memoir and even those pieces are funny, but they’re true, that’s all very true. And then the how-to satire was meant to basically accentuate the story, and bring out a little more color, no pun intended. And just to mess with people. I really like messing with people. And I wanted to go over the top. It’s an absurd concept, that there’s a way to be black. There is none, and so I embraced that absurdity, and used the satire to get away with it.

BT: Because publishing is very lucrative! You can just become a billionaire by putting words on dead trees and hoping people buy them…. And I think because we’re in a good time, like we’re in this sort of post-civil rights moment. We have a bi-racial slash black president in America, and we have this moment of identity where things are more interesting and flexible and people can kind of be more of who they are and be the multiple aspects of who they are, and present that, and have the world accept that in a way that wasn’t quite the case in the past.

5. FM: You wrote that you rejected the tentative title, “Thoughts On Post-Racial America.” What would a post-racial America look like?

BT: To borrow some of the thoughts from the people I interviewed, it would be an America full of unicorns and leprechauns, and other non-existent creatures. I don’t think a post-racial America is worth pursuing, because it kind of doesn’t have meaning. I think the way people think about it is very idealized, but not helpful, which is, ‘Oh, we just ignore race,’ but ignoring its existence doesn’t help us deal with some of the outcomes that are still heavily correlated to or dependent on it. So I think a better America, rather than seeking for a post-racial America—we should be seeking that more perfect union and I think we can do that.

6. FM: Are white people and black people supposed to have different experiences reading the book?

BT: Yeah, so when white people read the book, it’s supposed to burn their fingertips a little bit. And their soul actually flees into the body of a black person. It’s kind of a race-swap program.

7. FM: How does one get a job writing for The Onion?

BT: One does not get a job at The Onion. One murders a current Onion employee and assumes their identity. So I am actually technically Mike DiCenzo, who left The Onion a few years ago to write for Jimmy Fallon, and I’ve been filling in for him ever since. So skin’s a little tight, but it works out well.

8. FM: Is satire the highest form of comedy?

BT: Satire is like the highest form of living. It’s just the best way to be. I don’t know if it’s the highest form of comedy. It is a very important art. And it has the ability to communicate truth and insight in a way that really messes with people, that kind of challenges the line between joke and statement but leans toward joke most of the time. And can, when done very well, attract people and reach people who wouldn’t be open to being reached by that message.

9. FM: Is “funny” about exposing what’s already there, or creating new situations people haven’t envisioned before?

BT: That’s an amazing question. That’s a very good question, because you’re sort of also getting at: does art reflect society or drive it? I think humor faces that same, probably unanswerable question. At the best, you don’t quite know…. I think much more often than not, humor, and specifically art in general, reflects what’s actually the case. But the best of it, and I’m not saying I do this…but at its best, the humorist is so actively and accurately in touch with the zeitgeist, with the actual state of the world, that what they say feels like influence, and feels like prediction, when it’s just really, really, good listening and reframing of something that’s already true.

BT: I really like “Bob’s Burgers.” I think it’s not on [the] air technically right now. “Community” is really high on my list, it’s funny, funny stuff…. “Louis” is one of my favorite shows. But it’s almost because it’s not always funny, but it’s still always good, that I really like.

BT: It took me about a year.

12. FM: How would you describe your experience on your book tour?

BT: The book tour has been great. I feel like I’m running for president…. What’s been cool is just sort of seeing people’s excitement, seeing people like give folks weird looks for having the book, because the title, it just it jumps out at you. So there are all these photos people posted around the country, like they saw somebody with the book on the subway, like “Why are you...? Is there a manual for that? Why are you reading that, what’s going on?”

13. FM: Has President Obama read your book? You have a whole chapter on him.

BT: Oh man, I want him to. I’m sure he could not be caught in public holding a book called How To Be Black, like all the conspiracy people would be like, “I knew it! I knew it!” So sadly, he probably can’t read it in public, but he could take the cover off, he could put something [on] like, “How To Lead All People.” You know, like something neutral and positive sounding. I would love if he read this book. It’s written in the spirit of the era that he is president of.

14. FM: What’s the most important conversation you’d like people to start after reading this book?

BT: I would like them to contemplate how many more books they should buy.

15. FM: What do you hope the reader will learn?

BT: So, there’s a couple of things I’d like people to get. One, I want them to laugh. I really do want them to enjoy it. I want them to walk at least a few miles in some of my shoes because I’ve had this weird and pretty amazing life…and I want people to find some connection to themselves…. The book is how to be. And so I hope people take from it to just be yourself. It’s cheekily like, “Oh, I want to be black. Maybe I’ll buy this book.” Maybe you buy it with that weird intention of becoming black, but you just end up being more yourself.