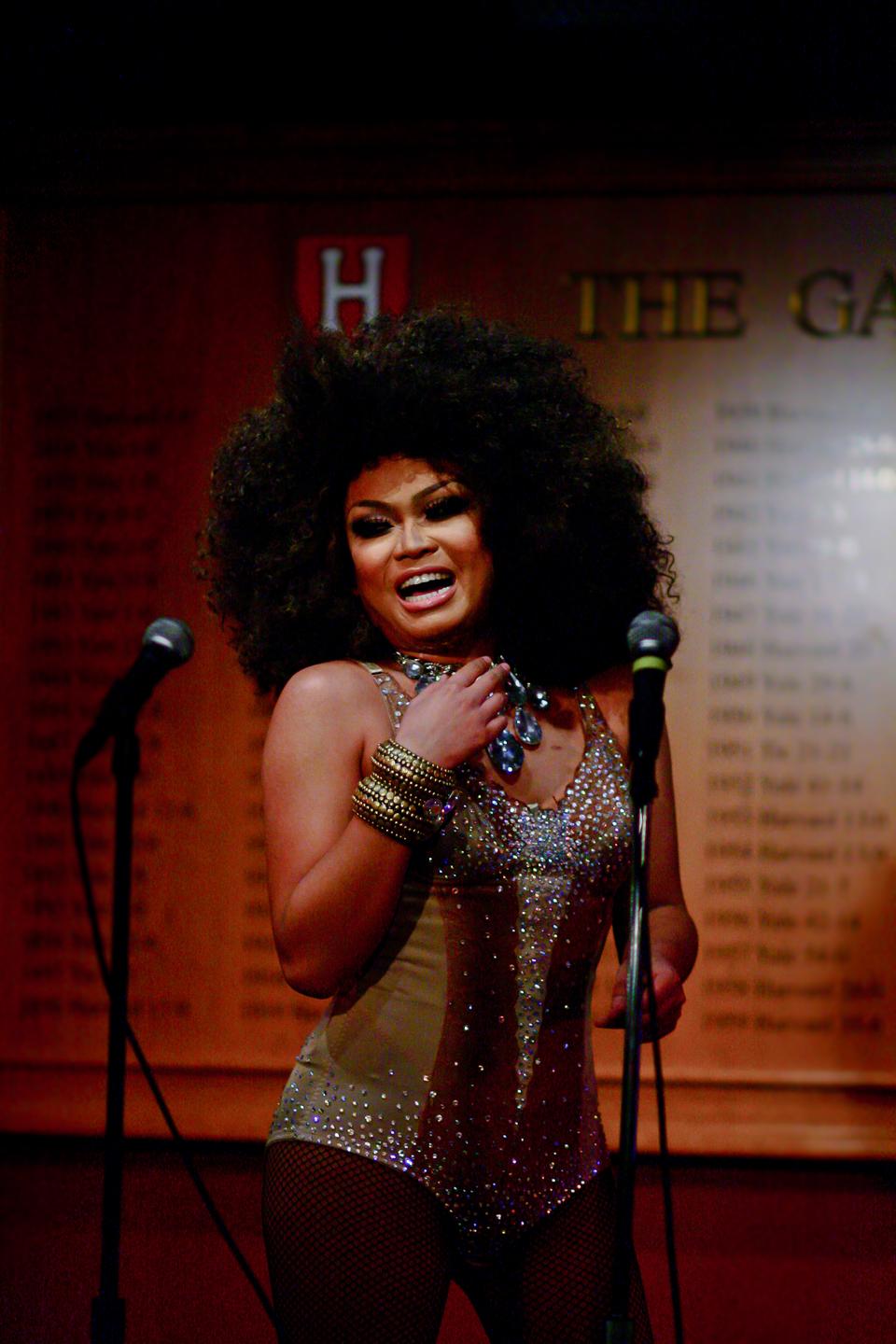 FM: We’ve read that you’re quite the LGBT historian. Are there any highlights of that history in the Boston area?
By Mark R. Jahnke

1.) Fifteen Minutes: You’ve performed at many other colleges. How was Harvard different for you?

Jujubee: I’ve kind of gone all over the country doing colleges, and every one is completely different from the other. The main goal is to have a good time and to break away from the studies for a minute and to enjoy being a young adult and, of course, to embrace the art of drag before your finals—because I know you guys have finals very soon, right? It’s gonna suck!

2.) FM: We’ve read that you’re quite the LGBT historian. Are there any highlights of that history in the Boston area?

JJB: Jacques Cabaret. You guys have heard of Stonewall, right? Jacques Cabaret is kind of the same version of Stonewall, but here. It opened in 1930, I believe. In 1939 it became gay, but it was an underground kind of situation, and there were drag shows. There are still drag shows there now; it’s right in Bay Village—like this seedy, little, tiny bar—and you get some fabulous drag shows out of it.

3.) FM: Do you have any words of advice for aspiring performers?

4.) FM: Harvard recently  opened the Office of BLGTQ Student Life. What else can the administration do to support the BLGTQ community on campus?

JJB: I’m shocked that it’s so new for you guys! I went to UMass, and I lived on the 2 in 20, which was the second all-gay floor at any university campus in the country. The hardest thing for me was going to college and realizing, “Oh my gosh, I’m gay, and I’m not going to have anybody to talk to, or anybody that’s relatable!” because it’s kind of hard to live in a world where everybody’s this way and you’re not. It’s definitely a great thing that you guys have it here because it’s going to help a lot of people. They’re going to see that it’s here and it’s natural. What does she say? Lady Gaga? “We were born this way!” And she was here!

5.) FM: Six-inch heels are a de facto uniform on Saturday evenings at Harvard. Do you have any tips on balance and poise for the young ladies and gents?

JJB: What you really have to do is tiptoe! Just pretend as though all your weight is at the front part of your feet and it won’t feel like anything. And always cross your legs.

6.) FM: What has  been your most  embarrassing performance malfunction?

JJB: I’ve fallen off a couple stages, not realizing it ended. A lot of the time I don’t get to see the actual space; I’m put on it, and then sometimes the lighting’s a little shoddy and I’ll walk, thinking, “I’m so fierce!” and then all of a sudden I’m down! But then I’ll get right back up.

7.) FM: In which drag challenge would you best crush the competition, and in which would you have your biggest train wreck?

JJB: I always wanted to do a drag challenge where we played news reporters, because I think I’d be great, like an anchorwoman. And anything that involves water I’m going to suck at. I don’t want to swim—I don’t want to get wet—so I’d fail that one.

8.) FM: What is your wildest drag fantasy?

JJB: Yes! My wildest drag fantasy is to take the shoes off—every single time. That’s really what it is! Oh girl, when I hit the car [after the show], it comes off!