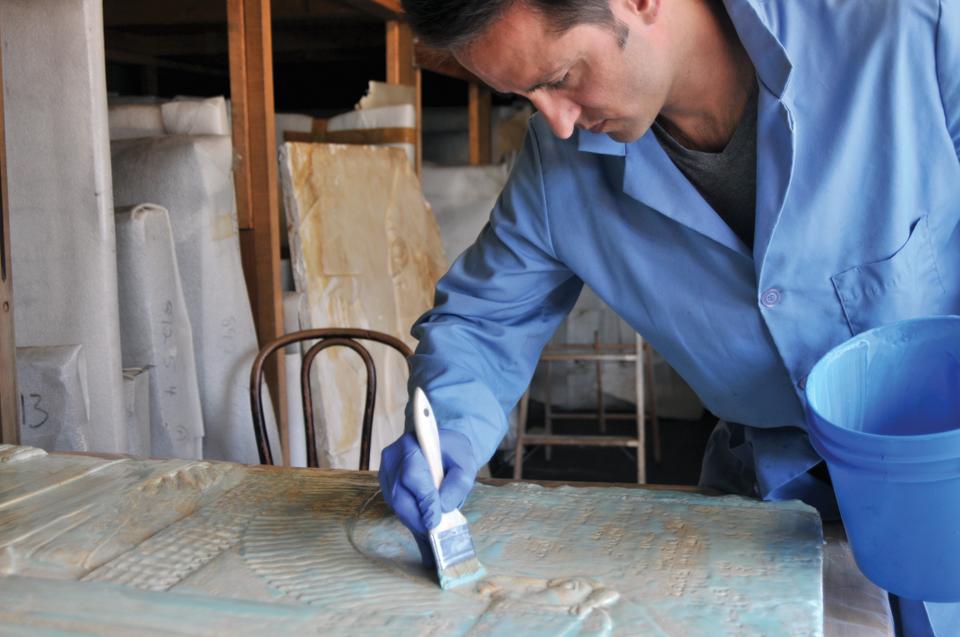 "We don’t want people touching, but we can’t do a whole lot about that,” says Adam J. Aja, smiling.
By Kevin Sun

"We don’t want people touching, but we can’t do a whole lot about that,” says Adam J. Aja, smiling.

Aja is assistant curator of collections at the Semitic Museum, which is located on Divinity Avenue between the Harvard-Yenching Institute and the Bio Labs. We’re standing in front of a large Egyptian tablet near the base of the museum’s first-floor staircase. My tour guide for the day, Aja is a young, skinny guy wearing a tucked-in button-down, straight-leg jeans, and slim leather shoes—an outfit that seems popular among the several male employees I encounter. He has been working at the museum since 2009, after receiving his Ph.D. in Near Eastern Archaeology from the University. Aja seems like the kind of guy who would make a great teacher: someone who smiles a real smile when looking at a collection he’s probably seen too many times, whose unfeigned enthusiasm makes me feel, even for a moment, that the ancient artifacts in the museum are worth my undivided attention. I drop my bag off by his desk in the basement, and we start the tour.

The Semitic Museum was founded in 1889 and moved to its current location in 1903. It was closed to the public during World War II when it was used as office space for the Navy. In the fifties, it became the Center for International Affairs.

During this period, the museum’s collection was stored in the attic and the basement. According to Aja, it was only rediscovered after an incident during the Vietnam era: Somebody detonated a bomb on the third floor, destroying a large skylight and parts of the wall. The damage to the building exposed the collection of valuable relics stored in the rarely visited attic and brought attention to the possibility of making that collection available to the public. Since then, the museum has been restored and shares office space with the Department of Near Eastern Languages and Civilizations.

On the first floor, Aja leads me to the main exhibition room, which houses a recreation of an Israeli house from the Iron Age filled with various relics, pots, and other vessels. We step across the threshold of the structure, and Aja explains the motivation behind arranging the artifacts in an interactive space.

“Objects behind glass don’t really convey the same message,” Aja says. Behind him, a sign reads: “PLEASE COME IN, but do not go beyond the barriers.” On the third floor, we take a look at Egyptian relics. It’s here that I realize how few visitors I’ve seen today, a weekday during lunch hour.

“As you can see now, it’s pretty lightly attended,” Aja says. There’s nobody but us in the room, but Aja reassures me that visitors and students tend to come later in the day.

After we’ve taken a look at the various artifacts on this floor and make our way to the attic, I ask Aja what appeals to him about working in a museum. He cites the integration of archaeology, art, and history, each of which plays a role in the job of a museum curator.

“It’s like a shotgun approach to scholarship,” he says.

We climb a steep, narrow staircase up to the attic. Beyond the exposed wood-boarding and moderately organized jumble of dusty display cases and crates are several tables covered with a plastic tarp. On these tables are large plaster replicas of an Assyrian monument. Aja’s latest project is to produce silicone molds of these replicas so as to create new replicas.

Standing in a nondescript corridor of the labyrinthine museum basement, Aja indicates the boxes along shelves mounted on the walls. Inside those boxes, he tells me, are vessels that contain the cremated remains of babies and young children who were chosen for ritualized religious sacrifice.

I quickly learn that the basement, which is not open to the public, is where all the curiosities of the museum are kept. The vast majority of the museum’s collection is hidden from view, stored underneath the very small offering displayed upstairs.

Since becoming an employee of the museum, Aja has spent a great deal of time attempting to overhaul the existing storage system, which he calls “objects stacked on shelves.” The system is exactly as it sounds : objects placed together on shelves that are locked away in closets, or placed in rows inside filing cabinets.

“This is not an ideal storage system—it’s crowded, which is the case for most museums. You only see a fraction of what’s on display; the rest is continually in storage,” says Aja.

He hopes that by switching to a modular system—that is, labeled boxes that hold sets of related artifacts—he can make better use of the little space the museum has and facilitate efficient display changes upstairs.

Aja unlocks a filing cabinet and asks, “Got clean hands?”

“Want to hold something a couple thousand years old?”

He pulls out a drawer filled with rows of clay tablets marked with cuneiform symbols. Eventually, he picks out one the size of an iPhone, placing it on the table and letting me handle it. As Aja tells me about the history of these tablets—they’re ancient receipts and records—as well as methods of preserving and restoring them, it occurs to me that there’s something strangely extraordinary and banal about handling something from the ancient past.

We make our way back to his office and he shows me one last artifact—a brand new acquisition, actually. Aja opens a small box and gestures for me to take a look. It’s a desiccated hand—a mummy hand.

A confession: As I leaned my head over to take a closer look, I also took a quick sniff. Nothing.

According to Aja, the hand had been passed down within a woman’s family; one day, she decided to come into the museum with the hand in a bag. The museum took it without hesitation.

The mummy hand concludes my tour, and Aja shows me the backdoor exit through the basement. Right before I step out, he stops and says, “Oh, here’s a giant stone capital,” lifting up a tarp to reveal the pillar head.

“There’s something everywhere you look around here.”

The Semitic Museum is located at 6 Divinity Avenue. Its hours are 10 a.m. to 4 p.m., Monday through Friday, and 1 p.m. to 4 p.m. on Sunday. The museum is free of charge and open to the public. Donations are welcome.