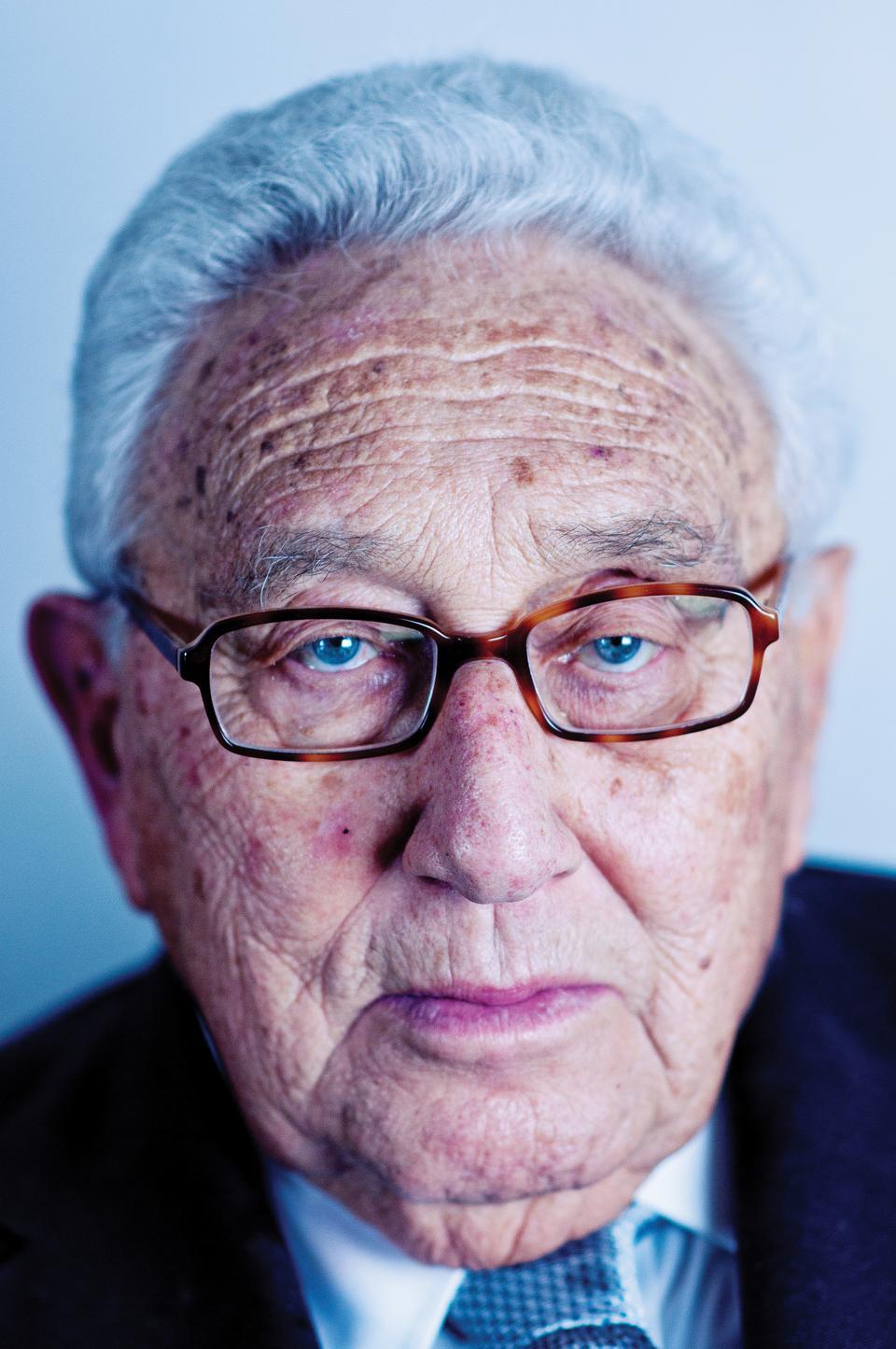 Henry Kissinger sits for a portrait on April 12 after the "Conversations with Kissinger" event at Sanders Theatre. Some students protested Kissinger's appearance.
Advertisement
Advertisement

Ten Questions with Henry A. Kissinger

On April 11, Henry A. Kissinger ’50 returned to Harvard for “A Conversation with Henry Kissinger,” a 375th Anniversary event that took place in Sanders Theatre.
By Ginny C. Fahs

On April 11, Henry A. Kissinger ’50 returned to Harvard for “A Conversation with Henry Kissinger,” a 375th Anniversary event that took place in Sanders Theatre. Kissinger, a German-born Jew who moved to the U.S. in 1938, served as President Richard M. Nixon’s controversial National Security Advisor during the Cold War and the Vietnam War and as Secretary of State under Presidents Nixon and Gerald R. Ford. Nobel Peace Prize winner, famed diplomat, and former Harvard professor, Kissinger holds 88 years of history and international encounters in his memory.

Fifteen  Minutes:How often have you returned to Harvard since you were on the faculty here?

Henry A. Kissinger: I didn’t return to Harvard after I left government for—what is it, since ’77—35 years.

FM: Have you been surprised by any  of the changes that you have seen on campus?

HAK: Well, there are a lot more modern buildings.

FM: What connections do you see between the relationships of Harvard and the White House, and the academy and the federal government?

FM: How did the Kennedys force the connection?

FM: As a statesmen, have any specific situations of which you’ve been part challenged your views of morality?

HAK: You cannot go through life without coming up against situations where you have to ask yourself, “What is the right thing to do?” It’s hard if it’s right in the abstract, but it is an essential part of life.

FM: Are there any moments when you found yourself having to ask that question?

HAK: You know the way the issue is always put creates the impression that there are a lot of wrong things that you may be considering. It isn’t the way it happens in life most of the time. Most of the time you have an informed view of morality, so you don’t ask yourself at every point how it conflicts.

FM: Throughout your career you have been a part of negotiations with very high stakes. What was your strategy when entering tough negotiations and how did you learn and practice negotiating beforehand?

HAK: I had read about a lot of negotiations when I did nineteenth century history. I did my professorial work initially on nineteenth  century European history, and I studied a lot of the negotiation then. In the Kennedy administration I was a White House consultant and I saw the Berlin Crisis. But when I came into government, I had never really done any real negotiation myself, in ’69.

FM: And how did you learn and practice?

HAK: I learned by practice. And of course the historical background. You know, I had studied the diplomacy of Castlereagh, of Metternich, of Bismarck—the diplomacy prior to WWI. So I had read a lot about diplomacy.

FM: Was there a single person or group whose diplomacy strategies you particularly admired?

HAK: I thought Bismarck was a great diplomat, and Disraeli, talking of the 19th century. And then, later on, I was a great admirer of Dean Acheson.

FM: Do you remember a diplomatic situation during which you acted in an undiplomatic way?

HAK: I once had a meeting with Tito. I was out of government then, and he asked me what I thought of the Russian leaders. And I said, “What do you expect of a group of people all of whom are over 80?” And I realized he was over 80. And of course I was much younger then.

FM: How did he respond?

HAK: I think he just stared at me.

FM: You came to America from Germany in 1938. You served in the American armed forces during WWII before returning here once more to live. How has your relationship with the country changed over the course of your lifetime?

HAK: Well, you know when you come from a totalitarian society as a member of a persecuted minority you get a profound admiration for this country and for the freedom that it represents in the world. And one reason that I sometimes disagreed with some of my contemporaries at Harvard was that they were carrying on about American inequities. I knew what America had meant to me and to so many others. And if you think of some of the hostile questions [from the audience at the 375 event], they all come, it seemed, reveling in being able to say bad things about this country—and I don’t accept this.

FM: What are the most important problems facing American society today?

HAK: Internationally, the problem is that there are upheavals going on in every part of the world, but these upheavals don’t follow the same basic causes, and so the United States has to be part of an international system that we create domestically. I have to say that a big problem we are facing is that the new information technology produces a lot of information but not necessarily knowledge. And that social media connects you with groups but not necessarily with a purpose. And that is a challenge.

FM: What do you think that Harvard students can do about this?

HAK: Well, Harvard students—or any students—should really learn that some of these facile, pre-packaged answers one gives can get you through a conversation but not through life.