Fundraising drive has already hauled $2.8 billion in donations and pledges 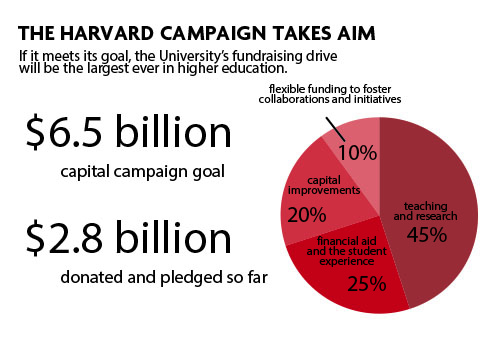 The Harvard Campaign is looking to raise $6.5 billion, a sum that will be distributed among teaching and research initiatives, financial aid, “the student experience,” capital improvements, and “flexible funding to foster collaborations and initiatives.”
By Nikita Kansra and Samuel Y. Weinstock, Crimson Staff Writers

The Harvard Campaign has set a fundraising goal of $6.5 billion, University officials announced in a press release on Saturday, a target that, if reached, will make it the largest fundraising drive ever in higher education.

The announcement said that Harvard has already raised $2.8 billion in donations and pledges from more than 90,000 supporters in the Campaign’s quiet phase, a two-year period of intense internal planning and preliminary gift solicitation behind the scenes. The quiet phase ended Saturday with the Campaign’s public launch, which has drawn alumni from around the world to campus this weekend for several launch events.

In its announcement, the University also laid out an approximation of how the Campaign’s funds will be spent. Forty-five percent will go to teaching and research, 25 percent will go to financial aid and “the student experience,” 20 percent will be used for capital improvements, and the remaining 10 percent will serve as “flexible funding to foster collaborations and initiatives,” according to the release.

The announcement also named more specific campaign priorities that have been public for some time—House renewal, development in Allston, expansion of the School of Engineering and Applied Sciences, creation of common spaces, and the advancement of HarvardX, the University’s branch of the virtual education platform edX.

Saturday’s launch, which is not open to the public but is being streamed live online, includes events featuring University President Drew G. Faust, former students such as Bill Gates, and prominent Harvard faculty members. Live-streamed events began at 1 p.m. with a faculty panel held in Memorial Church.

According to excerpts of Faust’s prepared remarks, slated to be delivered at 4 p.m. in Sanders Theatre, she will frame the Campaign as a chance to address unprecedented challenges and opportunities in higher education.

“We undertake this campaign in a time when public discourse about higher education so often focuses narrowly on outcomes we can measure in dollars and products, numbers and jobs. Make no mistake: those are important, and universities are crucial to those outcomes,” she will say. “But to see universities through so restricted a lens is to fail to recognize their most distinctive strength; it puts at risk their most vital and enduring contributions to society—their singular power in the search for meaning, values and creativity, in the constant and ever-changing pursuit of truth.”

In a statement in the press release, James F. Rothenberg ’68, University treasurer and a Campaign co-chair, expressed excitement about the public phase of the campaign.

“The Harvard Campaign is critical to the University’s ability to fund important priorities going forward, but it is also an opportunity to redefine Harvard and higher education more broadly,” Rothenberg said. “This is an exciting time for Harvard, and we are committed to ensuring that the University will continue to have a meaningful impact well beyond Cambridge.”

The University’s fundraising target of $6.5 billion exceeds the record-breaking $6.2 billion raised by Stanford in its latest campaign, which wrapped up December 2011, as well as the $6 billion goal set by the University of Southern California, which launched its ongoing campaign in September 2011.

A Harvard official told The Crimson in 2011 that Harvard’s campaign would likely last for about five years past its public launch, a timeline that would see the campaign’s conclusion in 2018.