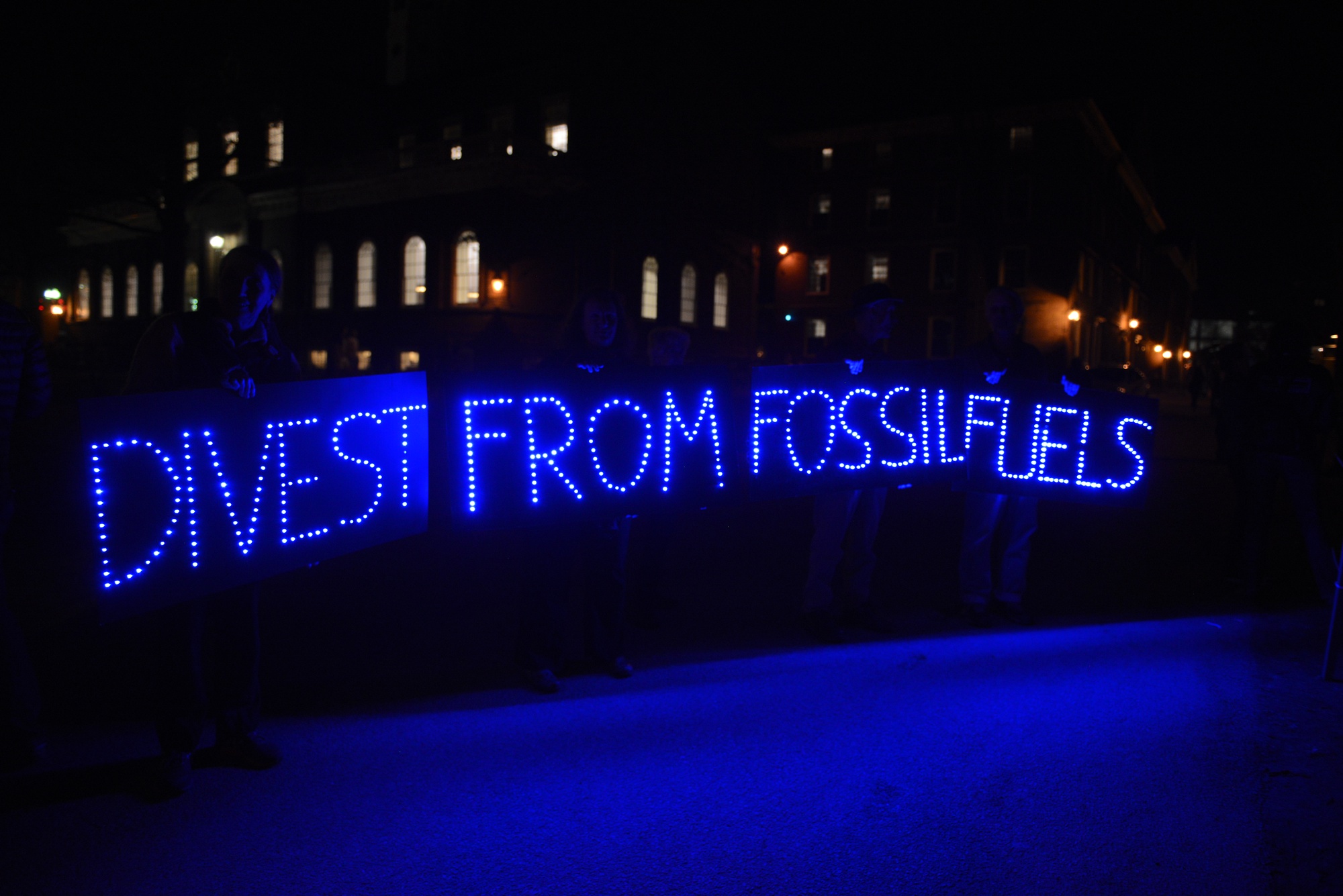 Members and supporters of activist group Divest Harvard hold signs and banners in front of Massachusetts Hall on Sunday night. The group says it plans to blockade the administrative building until Friday.
Advertisement
Advertisement

Depending on whom you ask, Divest Harvard hasn’t done anything yet.
By Joshua A. Goldstein and Henry S. H. Shah

Depending on whom you ask, Divest Harvard hasn’t done anything yet.

“Divestment will be the culmination of our work,” says Talia B. Rothstein ’17, the group’s current co-coordinator.

From Syracuse to Stanford, Hampshire College to the University of Maine, some schools across the nation have divested endowment funds from fossil fuel companies. Harvard’s administration hasn’t followed suit, but activists continue to raise the visibility and stakes of their protests.

In the past year, members of the student-led movement Divest Harvard have conducted sit-ins, undertaken a fast, and filed a lawsuit against the University, demanding that Harvard—whose endowment totals more than $35 billion—divert assets away from fossil fuel investments.

The tactics of civil disobedience used by Divest Harvard this year are similar in many ways to those used by student-activists in the 1980s, who sought to compel Harvard’s divestment from investments in apartheid South Africa. In response, Harvard instituted “selective divestment,” reducing South Africa-based investments by $230 million between June 1986 and January 1987.

The university has not yet even partially supported the group’s demands, but the circle of activists has continued to expand. “Last spring we had six [people willing to risk arrest],” says Chloe S. Maxmin ’15, a co-founder of Divest Harvard. “During [Harvard Heat Week] we have dozens.”

Divest Harvard’s more recent, higher-profile actions have also garnered media attention from outlets including The Boston Globe and The New York Times. The group has continued to figure out how to work with their raised profile. During the spring of 2014, debates about ramping up activity wracked the group.

“We were ready to escalate but couldn’t figure out how…. There was lots of internal debate,” says Maxmin. The group kept planning over the summer, attended the People’s Climate March in September, and jumped back into action in late October.

The group held a four-day fast to raise awareness for their cause. The event was structured explicitly to allow for multiple levels of engagement, from fasting to attending a series of talks to listening to the Cantab Cowboys jam during the kickoff event.

“The fast was a way to provide a more inclusive way for people to get involved,” says Maxmin. The events helped draw the attention of groups like 350.org, an advocacy group led by former Crimson president Bill E. McKibben ’82.

“An organizer from 350.org called us just before spring classes began. Bill had a proposal for us. We both wanted to put the machine behind it,” says Rothstein. The group’s coordinators and others texted and planned directly with McKibben throughout the winter and spring. The plan for increased action wasn’t spontaneous, but long in the works.

Divest’s on-campus work continued as well. In November 2014, seven Harvard student activists filed a lawsuit against the University. The complaint called for Harvard to immediately divest from direct investment in coal, oil and gas companies, and to phase out other investments containing fossil fuel stocks.

According to the complaint, Harvard Corporation’s investments violated its “special obligation and accountability to the future, to the long view needed to anticipate and alter the trajectory and impact of climate change.”

The complaint also stated that Harvard Corporation’s investment in fossil fuel companies contributes to the diminishment of the plaintiffs’ education and will physically threaten the Harvard community in Cambridge.

The Harvard Corporation filed for the lawsuit to be dismissed, and it was on March 17. The group has told The Crimson that they plan to submit an appeal and bring the issue back to the courtroom.

The group was busy planning a visible direct action while pursuing legal recourse. Their occupation of Massachusetts Hall was originally planned for December, but postponed due to the high level of activism following the non-indictment of Daniel Pantaleo in the death of Eric Garner.

On Feb. 12, Global Divestment Day, more than 30 students occupied Massachusetts Hall, an academic and residential building in Harvard Yard that houses the offices of University President Drew G. Faust. Once inside the building, students lined the hallway, displayed a banner, and planned for a rally the next day. Though those without University identification cards left around 5 p.m, some students remaining spent the night in Massachusetts Hall. The building is also a residence hall for 14 freshmen.

When asked if the protest disrupted student life in the building, Massachusetts Hall resident Charlie A. Gibson ’18 responded, “It honestly did not really change anything. We actually come in through the side doors.”

“We live on the fourth floor, and I went into the bottom floor of Mass. Hall for the first time about a week ago.”

[This issue went to press in the middle of Harvard Heat Week, which was scheduled to run from April 12 to April 17. As of press time, the group had held a launch event, began a blockade of Massachusetts Hall, and conducted a surprise four-hour blockade of University Hall. Bill McKibben led a group of Divest-affiliated alumni, who blockaded the alumni relations office the night of April 13.]