With Honor Code, College Looks To Turn a New Page 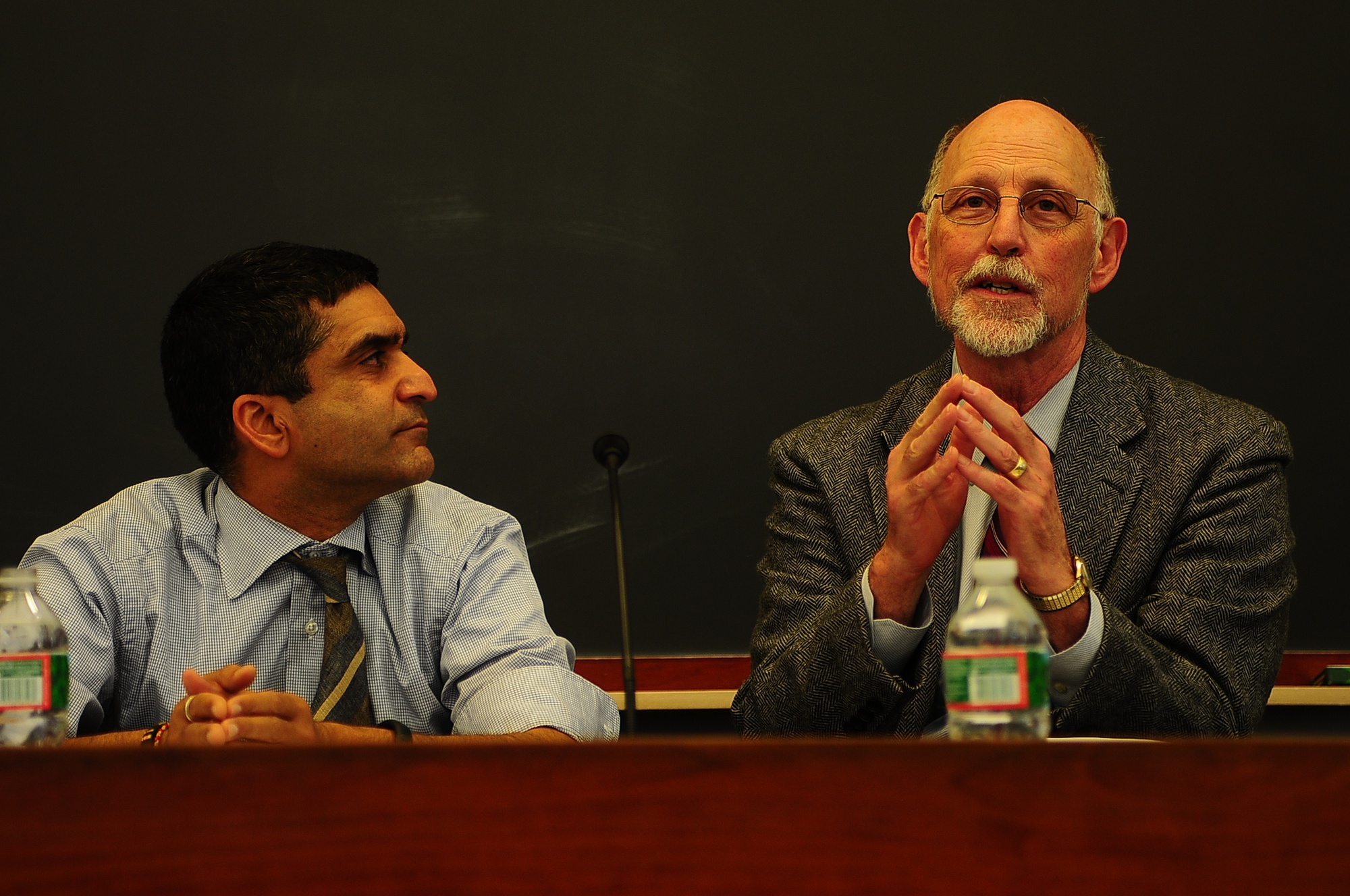 Rakesh Khurana, now dean of the College, listens as then Interim Dean of the College Donald H. Pfister shares his thoughts at a panel on academic integrity in 2013. The College's first-ever honor code will be instated in the fall of 2015.
By Noah J. Delwiche and Ivan B. K. Levingston, Crimson Staff Writers

The new honor code that College administrators are touting as a cornerstone of students’ education comes three years after an “unprecedented” scandal engulfed the campus in debate over whether Harvard had a cheating problem. It's a legacy of a controversy most current undergraduates did not even experience.

This fall, three classes of undergraduates arrived on campus with, by and large, no direct experience or memory of the Government 1310 cheating scandal, the College’s largest in recent memory that initially implicated roughly 125 students and ultimately required about 70 to leave campus temporarily. Only current seniors, and some older students who took time off, studied at the College in the midst of the investigation. 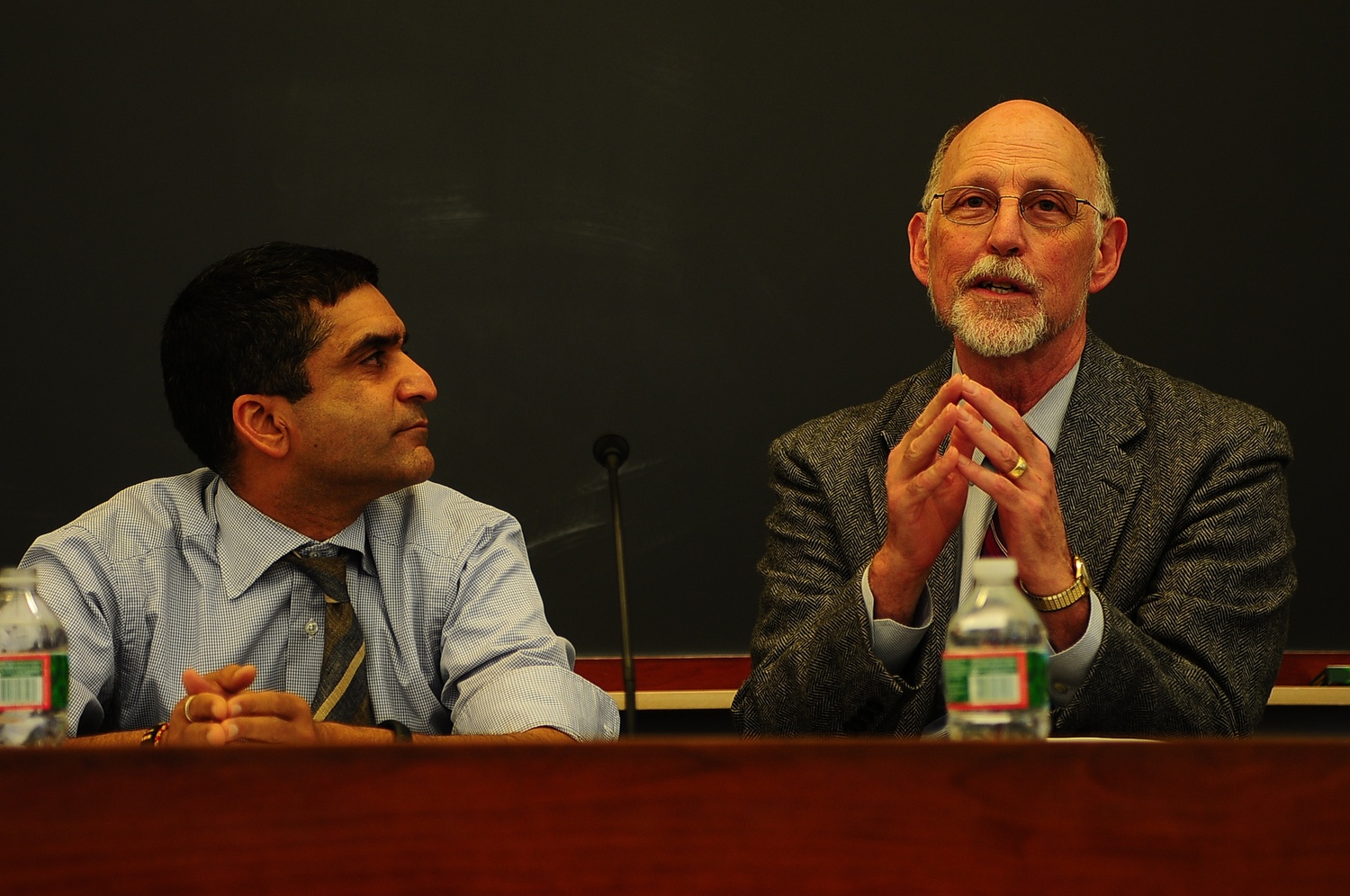 But all undergraduate divisions enter into the requirements of the College’s newest academic integrity policy this year. The culmination of more than four years of crafting, the College’s honor code mandates that undergraduates affirm their awareness of a commitment to “producing academic work of integrity” before enrollment. It also creates a new judiciary board of undergraduates, administrators, and graduate students who will hear academic dishonesty cases going forward.

In its roll out, administrators so far have repeatedly emphasized that they hope to prompt a “cultural shift” on campus surrounding academic integrity and consistently present it as an important part of a Harvard College education.

Still, just more than a year ago, faculty members heatedly debated whether the policy was well-crafted or even necessary; students questioned whether their peers would buy in. And some remain skeptical still.

By the time news of a widespread cheating scandal reached campus in late August 2012, some administrators at the College had already started discussing bringing an honor code to Harvard. Expedited by the cheating investigation and its aftermath, the College’s Academic Integrity Committee outlined goals for and later drafted the eventual honor code.

Brett Flehinger, the secretary of the new Honor Council, acknowledges that the cheating scandal in 2012 may have hastened the pace of the honor code’s formation. Still, he says research supporting the policy goes back further.

“Gov 1310 is maybe at most a sort of catalyst, but really the research that is the basis of this has been coming out for 20 years,” Flehinger said. “If this is a response to Gov 1310, this is too slow.”

The honor code’s eventual approval in 2014 came after debate among faculty members about its affirmation of integrity statement and how often students would have to sign it. At a faculty meeting in April 2014, some professors peppered Dean of Undergraduate Education Jay M. Harris with concerns that the requiring students to affirm their integrity too often may have an adverse effect.

Eventually, this past April, the Faculty approved legislation requiring that students affirm their awareness of the honor code prior to course enrollment and before final exams and projects, including theses, and other assignments at the discretion of individual professors. Still, late in the spring, some undergraduates voiced concerns about the affirmation at a student-faculty panel, with Henry Burnam ’16 deeming the affirmation “very dangerous.”

Still, on schedule, incoming freshmen reflected on their personal understandings of honor at the College in their writing placement tests this past spring. Harvard College’s first honor code is now in effect.