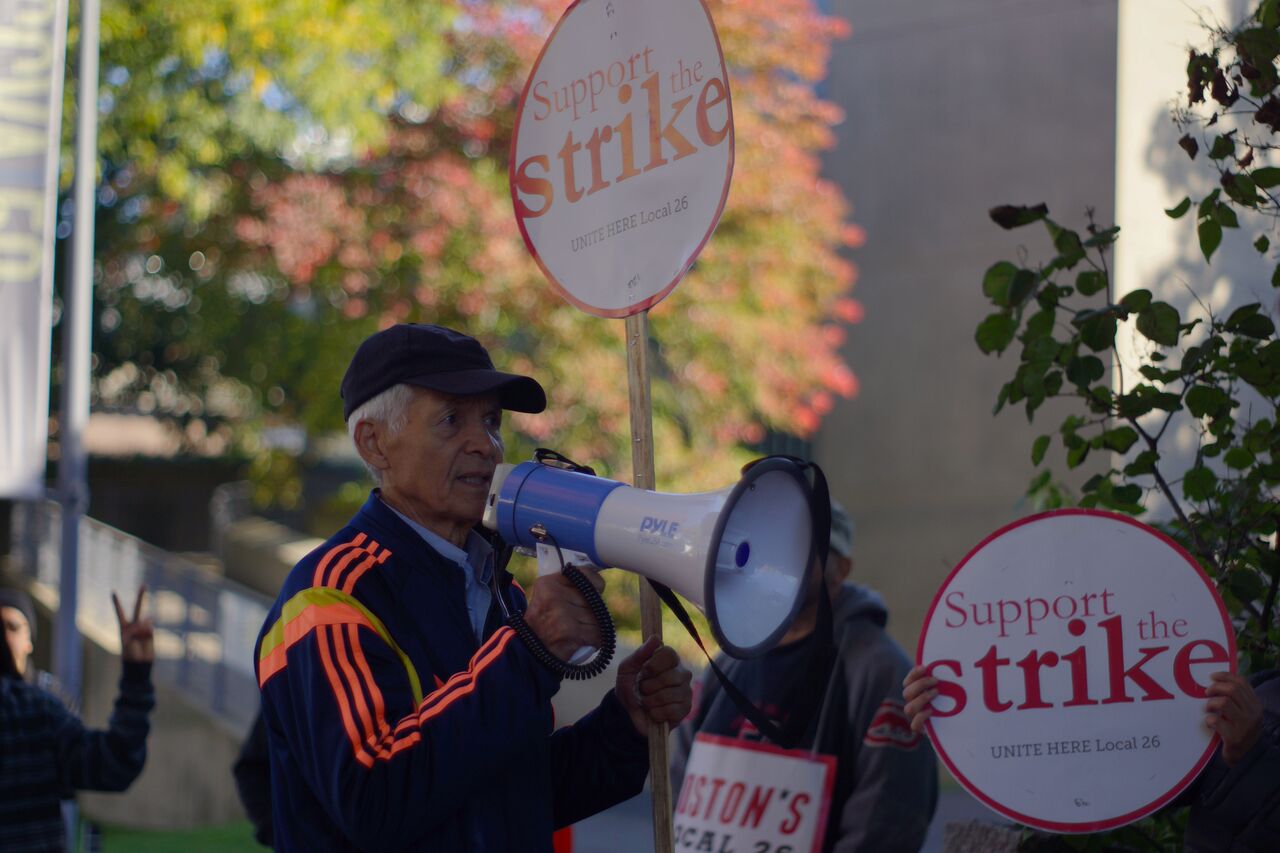 Harvard’s striking dining hall workers will not compromise on their “core demands,” their union's lead negotiator said, emphasizing “there is no middle ground” when it comes to renegotiating wages and health benefits—the issues that have spurred a months-long contract stalemate.

Since May, Harvard’s dining workers have been bargaining with the University in an effort to hammer out a new contract. Harvard has offered a plan for health benefits that would cut deductibles and increase copayment costs for the union’s employees, which union employees have vehemently fought. Union workers have also demanded year-round work and a “minimum guaranteed salary” of $35,000 for employees willing to work the additional summer months, which Harvard has held out against.

“Either [Harvard’s administrators] shift costs on the workers or they don’t,” lead union negotiator Michael Kramer said in an interview Tuesday. “There is no middle ground.”

Health benefits have emerged as a key sticking point between the University and the union. UNITE HERE Local 26, the Boston-based union representing HUDS workers, has been adamant in its demand that workers should not experience any increases in out-of-pocket healthcare costs.

Harvard has proposed that the union enroll in a health care plan identical to that negotiated by its largest union last winter. That plan eliminated deductibles, increased copayments, and introduced a new premium contribution tier for employees who make $55,000 or less annually; Harvard would contribute 87 percent of the premium for the lowest-cost plan.

Kramer said the addition of a new premium contribution tier was “an acknowledgement of the various levels of income” in the union, but added it was “far too small to offset the point of service costs” that workers might incur under the proposed plan.

When it became clear that Local 26 would not enroll in the proposed coverage, Harvard laid out a series of “enhanced” proposals for health care. It offered to fund a “flexible savings account” for employees that would begin at $80, and decrease as time goes on.

In the event that Local 26 rejected that deal, Harvard also said it would contribute the “equivalent cost of the Harvard University Group Health Plan enrollment premium” to a health care plan the union offers in-house. Local 26 did not accept that offer either.

“What is happening is a complete change in plan design,” Kramer said.

In emails sent to administrative deans and students, University Vice President for Human Resources Marilyn Hausammann wrote that “Harvard deeply values the contributions of its dining services workers and our proposals reflect that fundamental reality.”

But Hausammann called out the union for what she characterized as an unwillingness to engage in a “constructive dialogue.”

The union has also rallied to get the University to extend year round work to employees who are interested. Currently, HUDS workers are laid off during Harvard’s recesses and are unable to draw employment because of the University’s status as a non profit institution.

To address this demand, Harvard proposed in September a series of “summer stipends” that would effectively pay HUDS workers between $150 to 250 weekly to be available to work during the summer, regardless of whether they actually work a shift during the week.

Local 26 countered that proposal at the union’s 22nd bargaining session Monday and insisted that Harvard increase the amount to $450 per week. Kramer said the idea of using summer stipends to offset the lack of summer work is a “framework” the union is interested in pursuing.

If Harvard does not agree to raise the amount of those summer stipends to meet union demands, Kramer said the union is likely to return to their original discussion about finding “creative” solutions to providing workers with year-round employment. The union has often invoked Yale’s dining hall workers, who work year-round but shift to other jobs like custodial work during the university’s recesses.

“When you think of what is a peer institution to Harvard, there’s really only one name that comes up—and that’s Yale,” Kramer said in a September interview. “That’s really the only peer institution, and food service workers at Yale have a guarantee of 52 weeks of work per year. They’re in the same situation where they are an academic institution.”

According to Kramer, the union has also proposed the creation of a joint labor management committee in which representatives from Harvard and the union would engage in long-term discussions about contentious contract points like health care and wages.