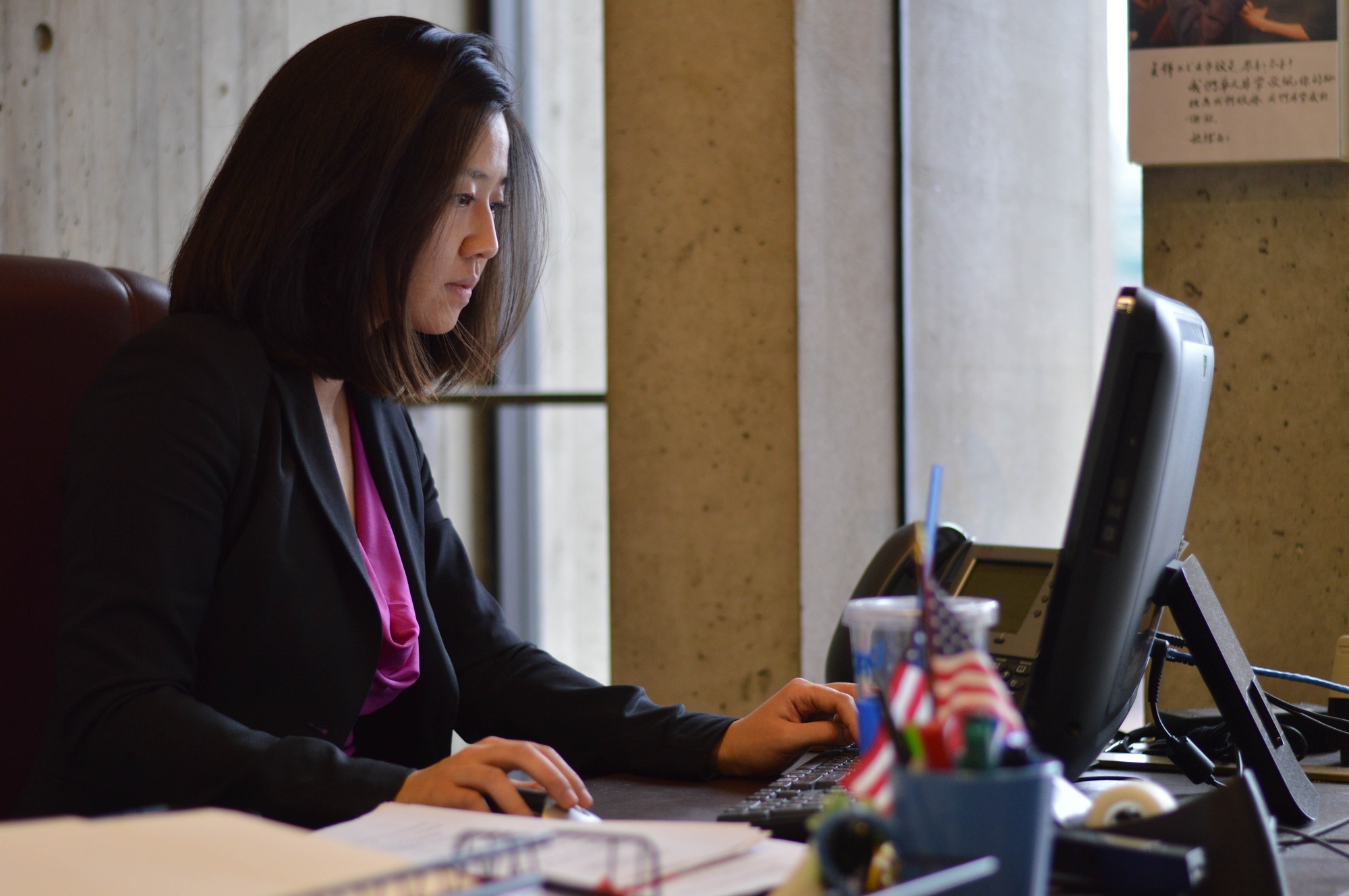 Michelle Wu ‘07, the first Boston City Councilor to give birth while in office, works at her desk in Boston City Hall at noon on March 30.
By Kenton K. Shimozaki, Crimson Staff Writer

The Boston City Council unanimously voted to support the Harvard University Dining Services workers’ strike at their meeting on Wednesday in a resolution introduced with an impassioned plea by the Council’s president, an alumna of the College and Law School.

The strike is entering its third week as the “University and the Union continue to meet with mediators,” University spokesperson Tania deLuzuriaga wrote in an email. The resolution put forth by City Council President Michelle Wu ’07 was met with vocal support by many of her fellow councillors, and loud cheers from a crowd supporting UNITE HERE Local 26, the Boston union representing Harvard’s dining workers, often broke out during the meeting. 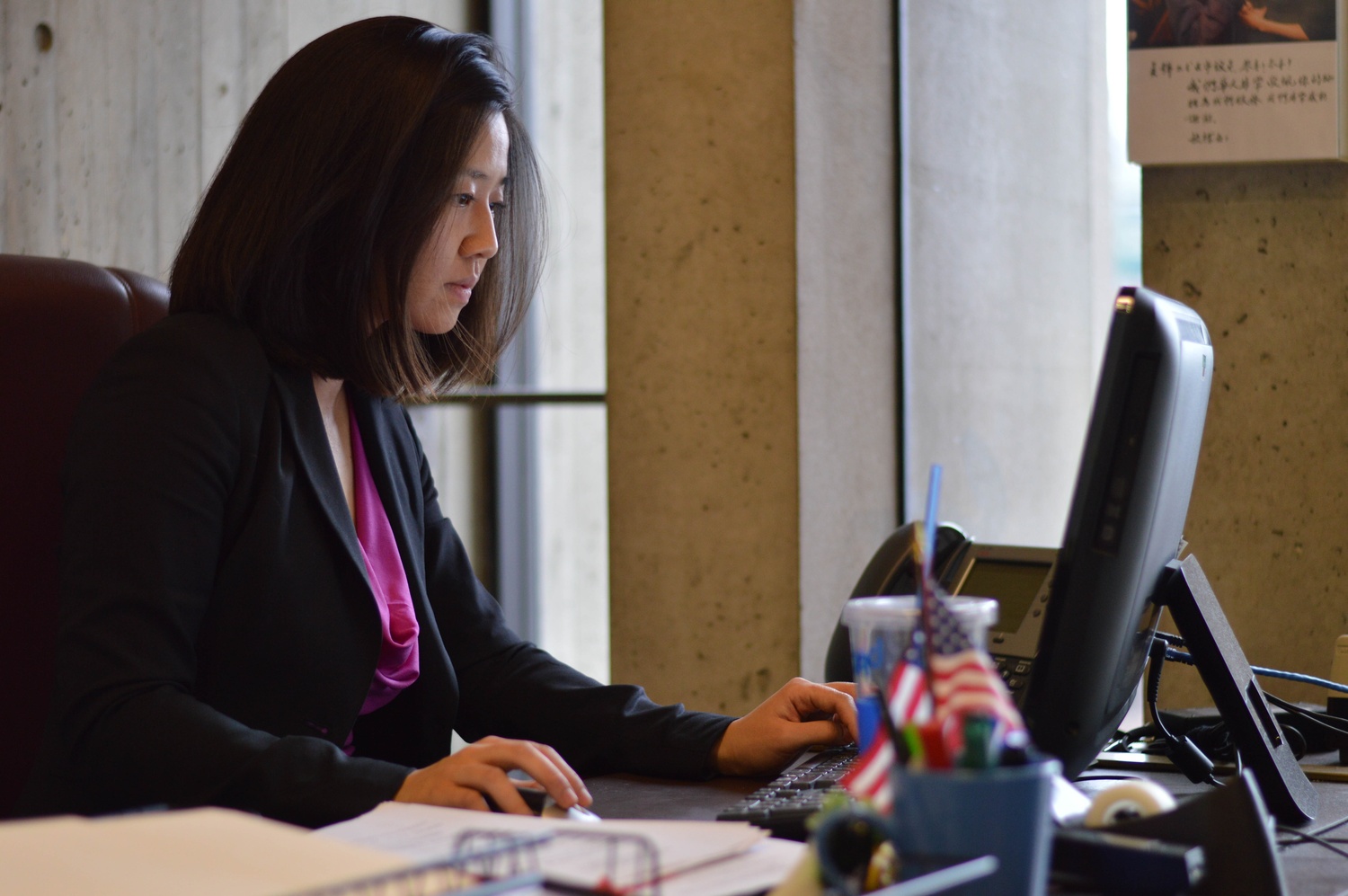 Wu spoke about the personal nature of her appeal to the Council and the connections she remembers students fostering with dining hall staff during her time at the College.

“When I arrived at Harvard as a college freshman, it was the first time that I was away from my family for any extended period of time. And the dining hall workers truly become your family away from home,” she said at the meeting. “They are the faces that you see every day, the people who are checking in on you to make sure you are eating well, or are getting enough sleep.”

In an interview with The Crimson, Wu, a former Currier House resident, reflected on moving into Harvard and developing relationships with employees in the dining hall.

“To have a familiar face in the dining halls, in Annenberg and in Currier, kind of become the people you see and get to know and who are the people taking care of you day in and day out,” she said. “As I met with the workers before our Council meeting, spoke to them, it’s clear that they love their jobs. They love taking care of students.”

She said that she was “happy” to speak with workers about their experiences and would be willing to walk with them in support.

“I did so before the City Council meeting,” Wu said. “I was happy to jump in and join the workers in talking about the need for affordable health care, the need for more opportunities to work year-round.”

Several of the city councillors, who added their names in support of the resolution one by one, criticized HUDS employees' salaries; those employees make, on average, are roughly $34,000 per year, according to deLuzuriaga. Local 26 estimates that number is closer to $31,000.

Councillors framed these figures with the size of Harvard’s endowment, which recently fell to $35.7 billion.

“The $35,000 annual salary, average salary, for these workers—that’s one, one-millionth of Harvard’s endowment. One, one-millionth,” City Councillor Josh Zakim said at the meeting. “We are talking about the richest, wealthiest institution, not just in Boston, but in the entire world and they do a lot of good, but they are not doing good today.”

Councillor Tito Jackson was also vocal during the meeting in his criticism of the University’s endowment and recent passage of the capital campaign’s $6.5 billion goal, saying: “Shame on you, Harvard.”

“Instead of studying hard for the test, why don’t you go ahead and actually take the test, and do right by the people who are your workers?” Jackson said during the meeting.

However, deLuzuriaga wrote in a statement that Harvard is constrained in how it can utilize much of the funds. Rules and conditions placed by donors on their gifts stipulate how most funds can be used.

“The funds that make up the endowment and the Harvard Campaign are largely restricted for specific academic purposes,” she wrote, referencing the University’s ongoing capital campaign. “These funds are also only one part of Harvard’s financial picture.”

The City Council’s resolution also noted that the dining workers had received the support of the College’s Undergraduate Council, which voted to endorse the strike in early October.

Former UC leaders also published an op-ed in the Huffington Post on Wednesday, adding their names to the list of strike supporters. The letter was signed by the former presidents and vice presidents of the UC from the Classes of 2011 through 2016.

“As former student body leaders at Harvard, we declare our solidarity with dining staff fighting for dignity in the workplace, a fair wage, and affordable healthcare for their families,” the letter reads. “Today, we urge our alma mater to be good—to support its dining hall workers.”

Across the Charles River from Boston, members of the Cambridge City Council also focused on the size of Harvard’s endowment when they voted to support the potential HUDS strike at a meeting in late September, prior to the strike's beginning.