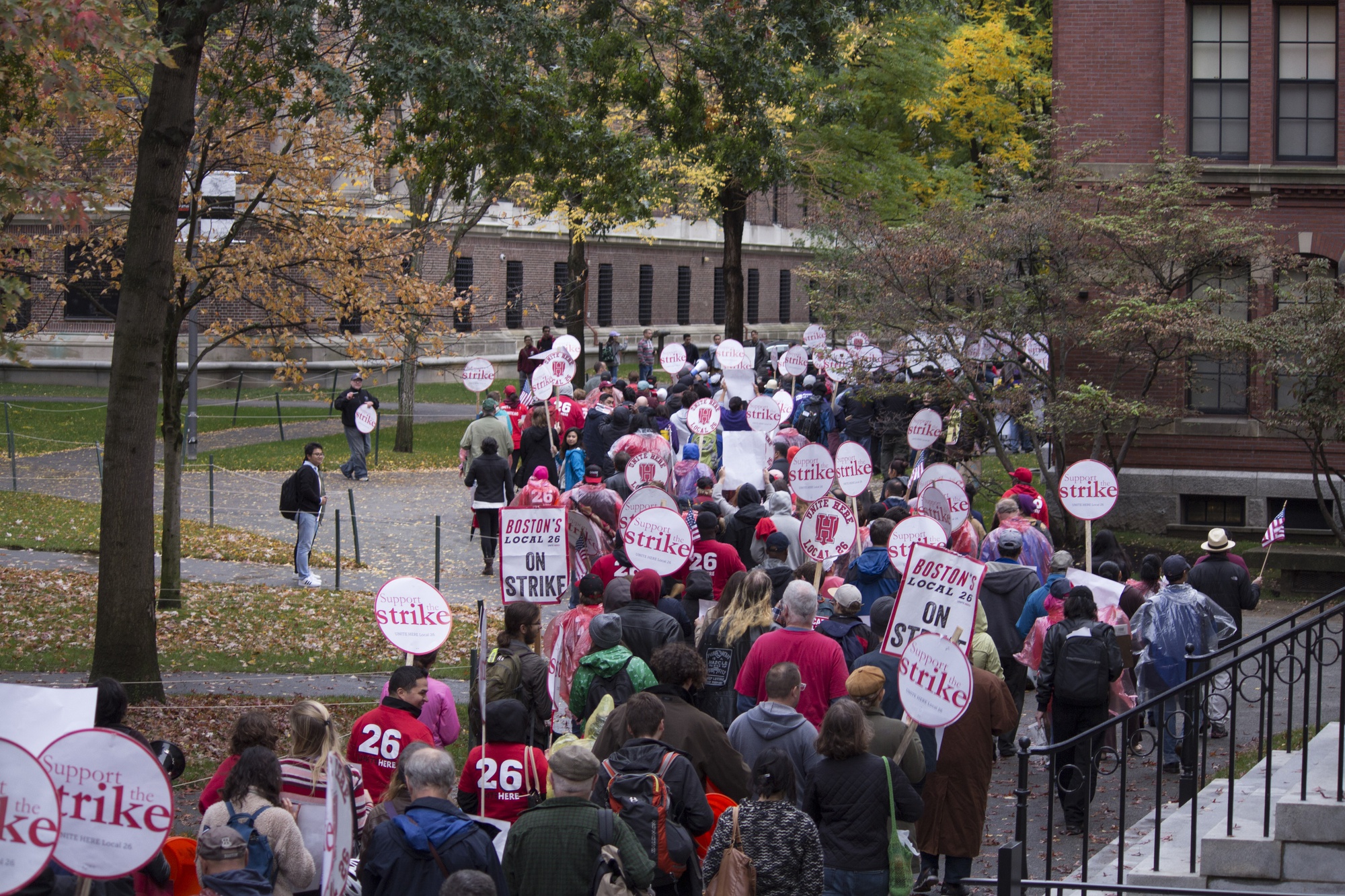 About 1000 HUDS workers and HUDS strike supporters, including representatives from unions throughout New England, gathered in Cambridge Commons for the HUDS rally.
By Brandon J. Dixon and Andrew M. Duehren, Crimson Staff Writers

As an unprecedented strike heads into its third week, Harvard’s dining service workers have begun to make progress in a months-long contract stalemate with the University.

In an email to Faculty Deans, Dean for Administration and Finance Sheila C. Thimba wrote that there were “hopeful signs of progress” at a negotiation session between Harvard and its dining hall workers on Thursday.

Thimba also wrote that when the strike ends, dining halls will not return to business as usual immediately. 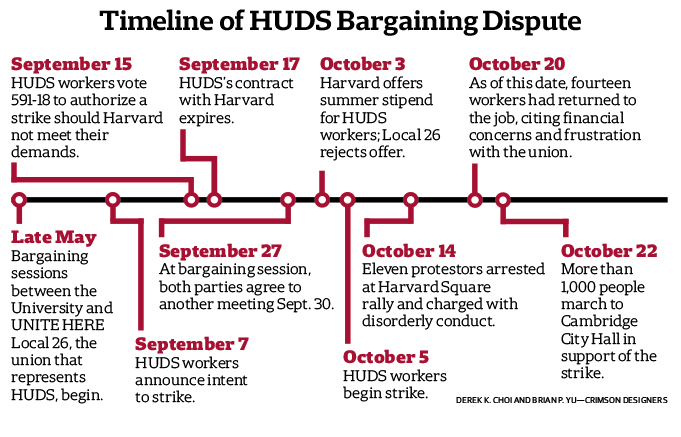 “Without wanting to generate irrational exuberance that a settlement is imminent, HUDS would like you to know (and begin to socialize with students) that when the strike ends, it will take up to 2 business days to clean and restock all the kitchens, reintegrate staff, and be ready to return to normal operations,” Thimba wrote.

Several dining halls that have closed during the duration of the strike have held unofficial brain breaks funded by various House groups, like the House Committee and tutors.

“These appear to be going well and have enlivened dining halls in Houses where meals are not being served,” Thimba wrote.

Brian Lang, president of the Boston-based union representing Harvard’s dining workers, UNITE HERE Local 26, wrote in an emailed statement that “while Harvard has slowly moved in our direction during our discussions, our core issues remain unresolved.” 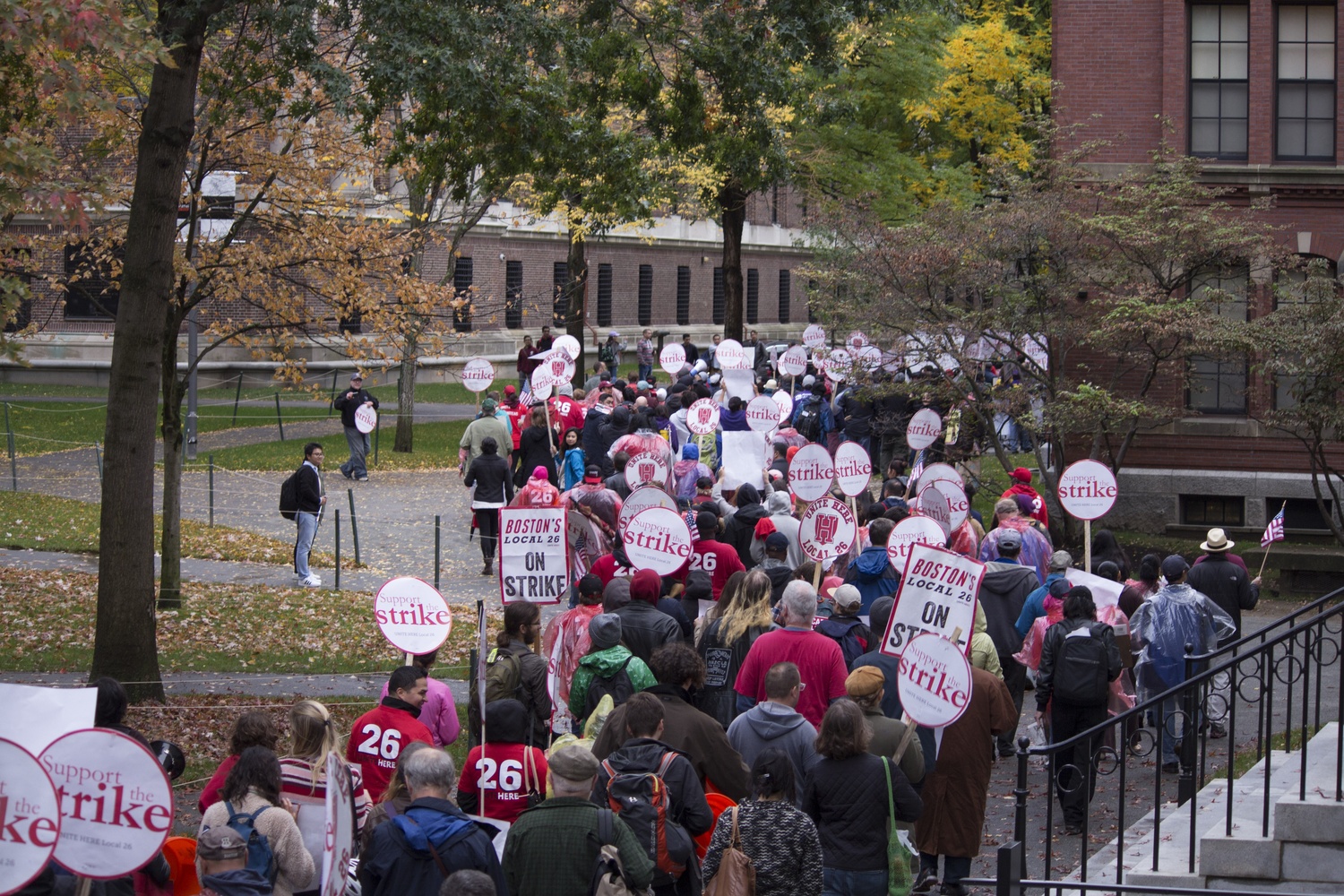 Still, his comments represent a slight shift in the tone of the negotiations, as the union’s lead negotiator, Michael Kramer, indicated earlier this month that there is “no middle ground” on issues of health care and wages—the two most polarizing topics of discussion during this round of contract talks.

In particular, Harvard and the union have disagreed about wage increases and health benefits for the HUDS workers. The union has resisted any change to the existing health care plan for HUDS employees; it also demanded that Harvard extend year-round work to its employees, and that those employees who accept it receive a “minimum guaranteed salary” of $35,000. Currently, Harvard estimates that average dining worker’s salary is near $34,000, though the union disputes that figure.

Dining halls across campus closed for undergraduates for the duration of the strike, limiting dining options for thousands of students. The University recruited volunteers and hired temporary workers to supplement the labor shortage.

As the strike has progressed, HUDS’s protests have escalated from initial picketing and chants, and last Friday Cambridge police arrested 11 individuals at a rally in Harvard Square, including two union leaders and nine HUDS employees, who were blocking traffic in Harvard Square in protest of the negotiations.

Local 26 members and supporters are marching Saturday afternoon starting in Cambridge Common, while Head of the Charles—a regatta that draws hundreds of thousands of people to the Boston area—takes place at the river. According to Thimba’s email, Local 26 indicated to the Cambridge Police Department that the union expects about 1,500 people to march.