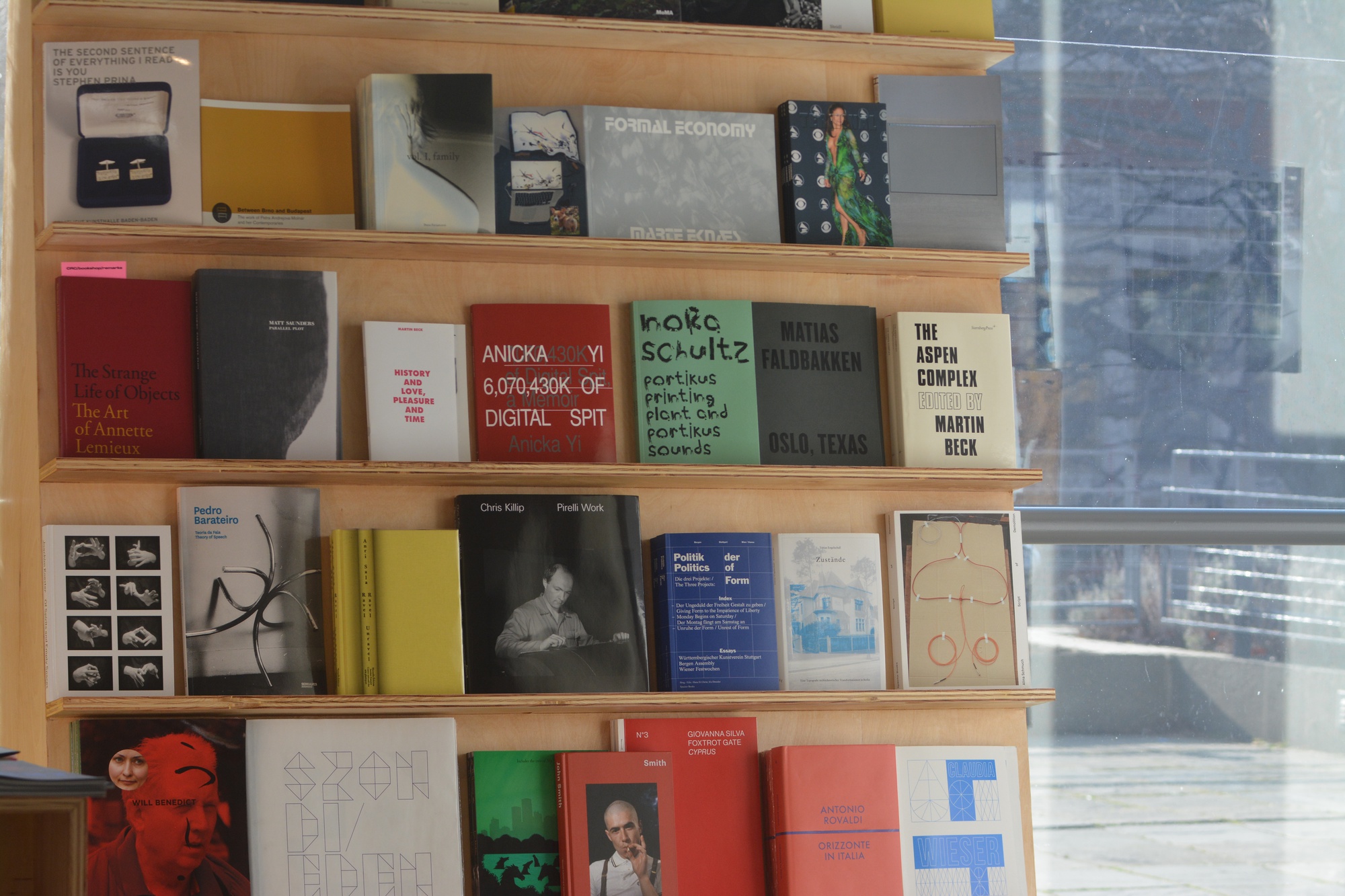 Books line up near the window of the Consumer Research Center/bookshop, an exhibit at the Carpenter Center for the Visual Arts
Advertisement
Advertisement

Inside the CCVA: Pop Goes the Book Store

Walking into the new Consumer Research Center/ itself feels like entering a different world—the pristine white gallery walls confer a sense of deep importance on the spare but carefully curated display of books.
By Kiara F. Z. Barrow

The Carpenter Center for the Visual Arts wears many hats, all of which are unimpeachably chic. If you are an architecture buff, you appreciate that it is the only building in North America designed by the world-renowned Swiss modernist Le Corbusier. For those of you who study Visual & Environmental Studies, the Center is your academic home, whether you shoot stills, absorb cinematic thrills, bathe printing plates in the fourth floor acid vats, or dab oil paints on the third. If none of these apply, you have likely had little reason to visit the Carpenter Center lately. But it might be time to don an all-black outfit, pack a recycled canvas tote, and head over to the newest addition to the 54-year-old Center: a pop-up art bookstore.

For many years, the Carpenter Center and the VES Department were one and the same: Students reigned over the building with abandon and professors mounted exhibitions when they could. There is still a haphazardness to the place, marked by the ever-present smell of turpentine, the dust and shavings outside the wood shop, and the unexpected looming force of a pneumatic sculpture exhibition. Last fall, the lobby was bathed in pink light for one such installation. But these days, the building itself has a staff, tasked with caring for its historic legacy and overseeing programming to engage the Harvard community in Le Corbusier’s mission of fostering a space for creative freedom.

When I meet with Daisy Nam, the Center’s Assistant Director, she points us to the lobby couches, an L-shaped strip of concrete upholstered in dark brown leather. “It took us, like, six months to choose this color, so we’re so excited when anyone sits here,” she explains. Whether her team is collaborating with the Harvard Art Museums on a gallery intervention or displaying the work of visiting faculty and thesis students, the group has been busily reimagining the space over the past two years, specifically looking to fill an awkward cluster of third-floor gallery rooms.

Lacking the climate control required by many art objects or the space to accommodate an extensive show, this area, formerly known as the Sert Gallery, has become the Consumer Research Center/, the punctuation suggesting a cornucopia of possible additions and combinations after the slash. Its logistical challenges are especially unfortunate on a campus already starved for exhibition space, student and otherwise. For now, it is occupied by an outpost of Motto Books, a Berlin-based fine art bookstore with other locations across Germany, Austria, Denmark, and Switzerland. At its opening a little over a month ago, the John R. and Barbara Robinson Family Director of the Capenter Center, Jim Voorhies, announced plans to rotate the space with other consumer pop-ups, maybe a farmer’s market or a craft beer tasting room to bring a little slice of Brooklyn to Harvard. The bookstore, though, is slated to occupy the space through December 2017—it’s a pop-up with a lot of sticking power.

Whether the consumers are doing the research or are being researched, or even who these consumers are, remain to be seen. “We want to sell books, but we’re not relying on that,” explains Nam. That’s good, because the prices are far beyond the range of a typical student’s budget. She’s more interested in the process of discovery that happens in unusual bookstores. Nam argues that the Internet’s commercially driven structure restricts our online consumption of media and content more than we think. As an antidote to this trend, she wants students to enter the bookstore, flip at random through an exhibition catalog or an artist zine with a name like Fotograf, and discover a different world.

Walking into the new Consumer Research Center/ itself feels like entering a different world—the pristine white gallery walls confer a sense of deep importance on the spare but carefully curated display of books. There is the periodicals section, though it is no doctor’s office spread: My familiarity ends at Cabinet, and then there are the European publications usually unavailable in America: Texte sur Kust, Mono Kultur, Pin-Up, and All-In. Some books hail from closer to home, including a series from Exact Change, a local publisher. There are artist books, exhibition catalogs (some adorned with names of Harvard faculty), illustrated poetry, and all manner of fonts and innovative design aesthetics. One book I pick up is mostly blank, with disjointed art criticism on only a few pages.

A square table dominates the center of the room as the store’s ethereal staff arranges books just so. Ostensibly, this is where all of the research is meant to be conducted, and Nam informs me that classes from Rhode Island School of Design, Tufts, Boston University, the School of the Museum of Fine Arts, and MIT have all recently taken field trips to the Center. Looking around at the sparse collection, I find it a little hard to believe that a class would travel here from Providence, but I suppose New England isn’t typically known for its preponderance of German art periodicals. Regardless, the Center’s success will depend on the degree to which students at Harvard are able to engage with it. The challenge will be to bring in those who don’t already have a VES background or another point of entry. The few times I’ve been, I have yet to see a Harvard student browsing between classes, though small pink bookmarks dotting the store are tokens of at least one Harvard group’s involvement. These annotated fluorescent slips denote class picks from a VES seminar being conducted this semester by Voorhies.

Titled “Falling from the Grip of Grace: A Critical Reading of Contemporary Art and Exhibitions,” Voorhies’ class is meant to be an educational experience integrated into the Carpenter Center’s latest initiatives, which also include an exhibition of work by the British video artist Phil Collins. On March 24, the class held a public screening and open seminar to engage the community in conversation about contemporary art and curatorial spaces. Collins’s videos had a jagged beauty, cutting across sentimentality to depict moments of real tenderness. Kids make out messily at music festivals, senior citizen ballerinas practice to a slow indie rock song, and Palestinian teenagers bounce and strut during an eight-hour disco dance-off in these documentary- and performance-based videos.

Upstairs, in the black box behind the bookstore that was constructed for this exhibit, seminar participants in owlish glasses debated the difference between the role of the artist and the documentarian. One feisty Cambridge adult, declaring himself a psychologist, argued, “You’re always interfering with behavior as long as you’re observing it.” He was not surprised by the footage from Palestine, like another woman, who was moved to see the humanity in a region usually discussed in terms of violence and political upheaval. “Every country has their own propaganda machine,” she remarked. “Yeah, if you buy into it,” the man responded. “I certainly don’t.”

It was encouraging to see interested and, perhaps, culturally starved Cantabrigians entering a dialogue with Harvard students in such a dynamic environment. The Motto Books pop-up, too, fills an offbeat niche in the arts community at Harvard and, if it lives up to Nam’s and Voorhies’ goals, could offer a way to rethink the expected consumer experience. Indeed, the Carpenter Center and its new Consumer Research Center/ offer a unique space to Harvard, and not just as a place to go when you are bored of the selection at the Harvard Book Store. The building is worth a visit, but be warned: There are no Sperrys or salmon shorts to be found here.