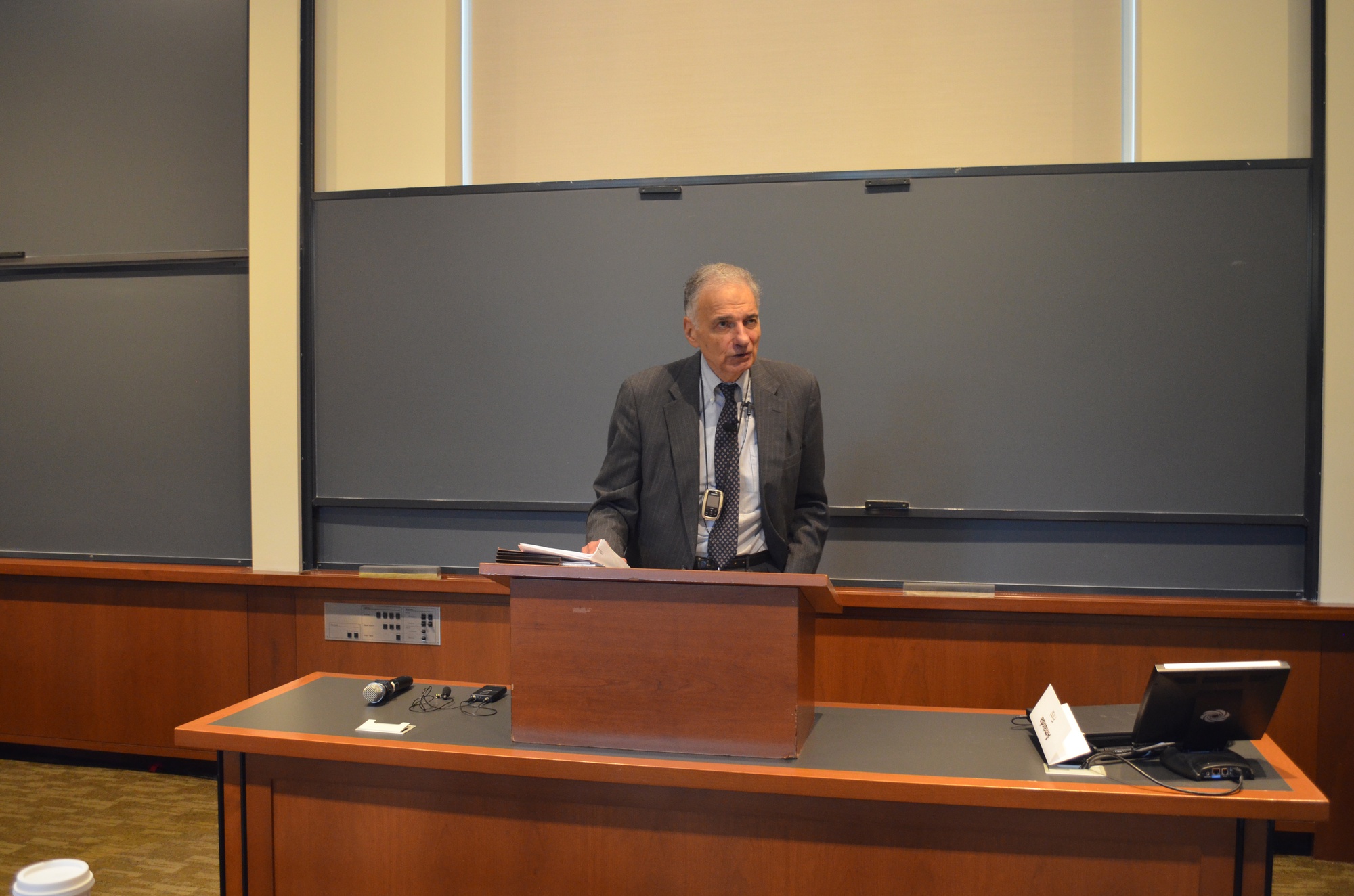 Ralph Nader JD '58 speaks about his experiences at Harvard Law School Thursday Afternoon in Langdell Hall. Nader spoke about among other things, how HLS should change its curriculum to adapt to the changing world.
By Andrew M. Duehren and Daphne C. Thompson, Crimson Staff Writers

When five alumni launched a renegade bid for Harvard’s Board of Overseers, four of the names made good, if not immediate, sense on a platform dedicated to abolishing undergraduate tuition and scrutinizing admissions practices.

Leading the charge was Ron K. Unz ’83, a conservative intellectual and entrepreneur who was at the forefront of the fight against bilingual education in California. Joining Unz, who also recently announced a bid for U.S. Senate, was Lee C. Cheng ’93, a lawyer who filed a Supreme Court amicus brief against affirmative action, and Stephen D. Hsu, a physicist advocating “merit, not race, in college admissions.” The ticket was rounded out by journalist Stuart S. Taylor, Jr., who co-authored a book on “mismatch theory”—the theory that affirmative action places the students intends to help in overwhelming academic settings.

Then there was Ralph Nader. A five-time U.S. presidential candidate and longtime public figure, Nader—a Harvard Law School graduate who built his career on consumer protection activism and environmentalism—seemed an odd fit for a University governing board, much less as a member of Unz’s “Free Harvard, Fair Harvard” ticket. Beyond the outsider candidates, eight other alumni are vying for the Board’s five open spots. 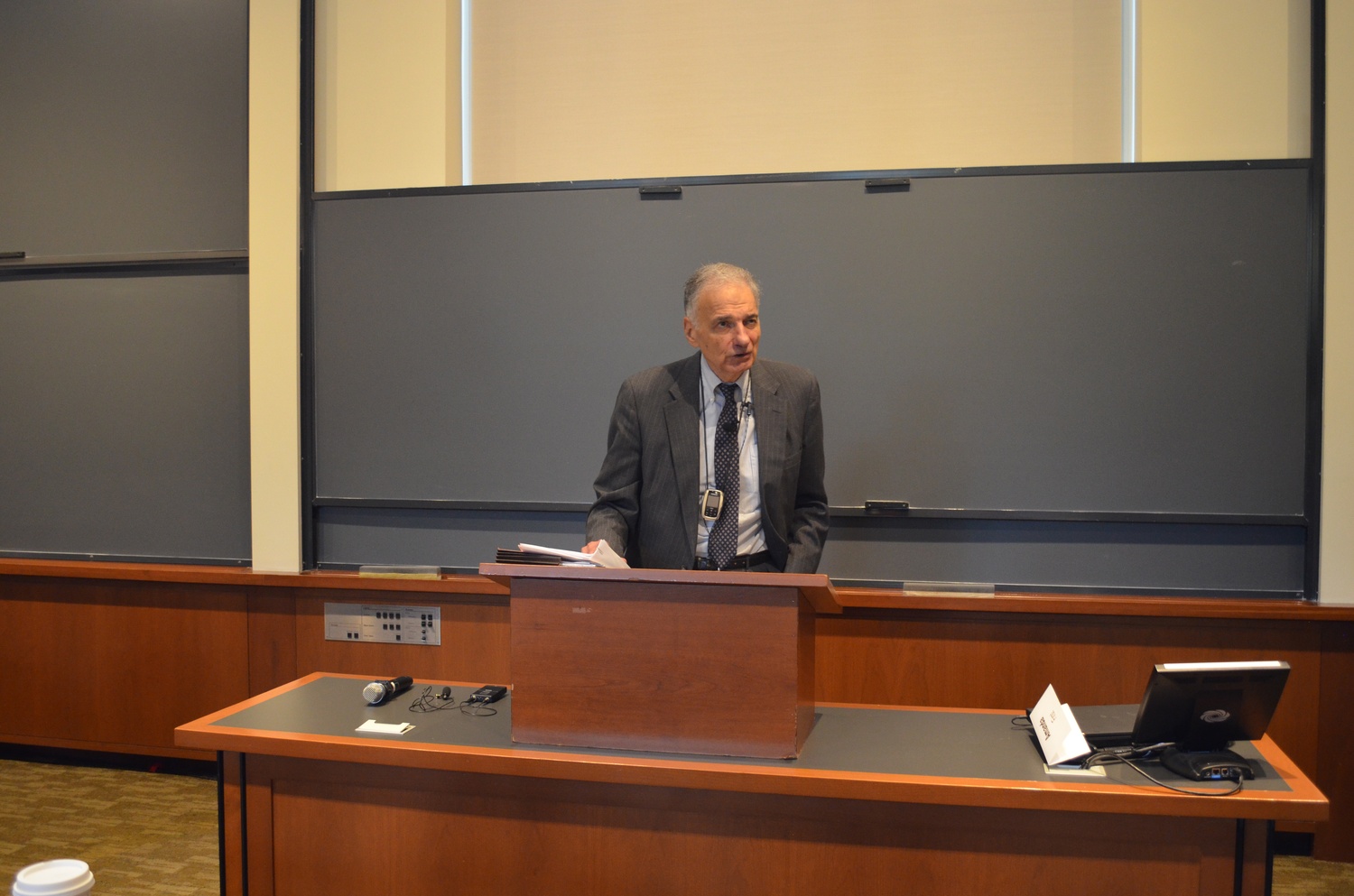 First, Nader wholeheartedly supports race-based affirmative action on a ticket mostly skeptical of the admissions practice. And while he now supports the group’s call to use Harvard’s $37.6 billion endowment to pay for undergraduate tuition, much of his activism and public life has focused on mandating seat belts and reducing carbon emissions.

Ideological differences aside, Nader brings needed star power to the ticket, Unz said. Ending tuition at Harvard, he added, “really would be a tremendous capper to Ralph Nader’s long career.”

“And his role would have been a very important one, because no one’s heard of the rest of us,” Unz said.

Unz and Nader knew each other for years before Unz recruited him for the Overseers slate this year. The two got in touch in 2013 after Unz began promoting a ballot initiative to raise the minimum wage, arguing that such a move would curb government welfare spending.

Nader reached out to Unz seeking financial support to lobby Congress on raising the minimum wage, and Unz agreed. In 2013 he donated $50,000 to Nader’s organization, the Center for the Study of Responsive Law.

Now, the unlikely duo is working together again to earn spots on the University’s second highest governing body. As he recruited candidates to join him on the ticket, Unz realized Nader’s Harvard connection—Nader has publicly criticized the Law School of servicing corporate greed—and pitched him on the ticket. Within 10 days, Unz said, Nader was sold.

“I wouldn’t look up all the rules of the Overseers and the petitions. I’ve got too much else to do here,” Nader said. “But if someone says, ‘look here are the rules, here are the forms, here’s what you have to do to run for the Board of Overseers,’ I said ‘fine.’”

Nader said his place on the ticket does not indicate complete agreement with all the “Free Harvard, Fair Harvard” candidates, who have faced criticism for their controversial platform since they entered the race. Unz has been scrutinized in recent weeks after his tax records revealed contributions to far-right individuals and at least one group that Unz called “quasi-white nationalist.”

“We agree on disclosure, and we agree on no tuition,” Nader said. “I’m not responsible for the others, or for [Unz’s] positions.”

Nader said he wants to make tuition free at both the College and the Law School, citing the size of the University’s endowment. “It’s just inert money that keeps piling up and piling up and they keep asking us for more and more and more,” he said.

Nader added that he supports more transparency in admissions and wants to look into how legacy students, athletes, and children of the wealthy might be privileged in the process. He expressed concern that Harvard weighs standardized testing too heavily, potentially disadvantaging lower-income students.

“It makes sense: you grow up in an inner city, there’s sirens, rats, leaking roofs, bill collectors harassing you, crime around you,” Nader said. “You’re not exactly likely to do well on the SAT as someone who lives in Scarsdale or Belmont, Mass.”

Ballots for the Board of Overseers went out to Harvard alumni earlier this month; they are due May 20.