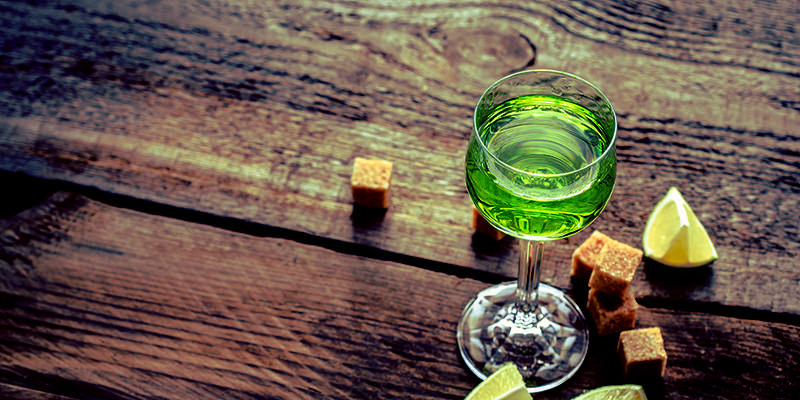 If there’s one thing synagogue taught me, it’s to love Jesus, go to Mass, and not drink absinthe to ascend to the next level of artistic vision.
By Andrew W. Badinelli

BEN: Despite running on an on ­and ­off schedule for the past several weeks, and causing tens of people to say “What’s that?” when prompted, Ben and Andrew has not been raking in as many clicks as we would have hoped. But then again, many great writers weren’t appreciated in their own time.

BEN: So we decided to embrace our Great Writer aesthetic. I went out and bought a wardrobe that focused primarily on the color black. Andrew leaned his head against a window and watched the raindrops slide down the glass.

ANDREW: We knew we needed to channel some of the best artists in history—people like Van Gogh, Hemingway, and Edgar Allen Poe. But people like this only had one thing in common: absinthe.

BEN: So we decided to drink a shit­-ton of it.

The sound of frantic whispering. The word “mom” is emphasized urgently, and repeatedly.

BEN: Sorry, I have a cold. I meant to say—we decided to not drink a shit­-ton of absinthe.

ANDREW: You know, to not sin.

BEN: If there’s one thing synagogue taught me, it’s to love Jesus, go to Mass, and not drink absinthe to ascend to the next level of artistic vision.

BEN: So on Thursday night, we obviously were not at the liquor store looking at the scant selection of absinthe there. Some fun facts I never learned about the drink—the hallucinogenic properties are attributed to a compound called thujone, which is derived from wormwood. Claims of psychedelic effects are made mostly by people who later cut their own ears off, so take them with a grain of salt. Unfortunately for our quest for Greatness, thujone is banned above a negligible concentration in the United States. So we didn’t have to settle for buying something that the subreddit r/absinthe terms “undrinkable swill.”

ANDREW: To be fair, for people who aren’t used to drinking warm PBR, “undrinkable swill” is definitely a step up.

BEN: That brought us to Friday night.

ANDREW: Gotta get down on Friday!

BEN: Right. So, anyway, on Friday we found ourselves—

BEN: Exactly. I don’t know how absinthe is prepared, but if I were to guess, I would imagine it is a strangely involved, somewhat contrived­-feeling process that involves us using sugar cubes, syringes for slowly doling out drips of cold water, and specially grated “absinthe spoons.”

ANDREW: I too am unsure. I would also imagine, however, that the only STEM concentrator on FM needed to snag some pipettes from Chem 27 lab in order to accomplish this process.

BEN: You have quite the active imagination, Andrew.

BEN: Absinthe is not not a drink for the classic college party. We weren’t bombarded with questions like “What are you doing?”, “Why do you have a syringe?”, and “Are you single?”

ANDREW: On an unrelated note, I am single.

BEN: You are not single; you mean.

ANDREW: But I was the one who wasn’t so impatient with the slow process that he didn’t pregame the absinthe with other beverages.

BEN: Wait. Wouldn’t it be—“I was the one who wasn’t so impatient with the slow process that he did pregame the absinthe with other beverages.”

BEN: Absinthe, to the best of our recollections, doesn’t taste like a cup of liquor had a midnight tryst with a bag of licorice.

ANDREW: But Ben, did it make us better writers? Have we joined the ranks of Hemingway, Poe, and Black?

BEN: That’s a good question. I guess we can look at my texts from that evening. One sec...

BEN: I dunno that looks pretty good to me.

ANDREW: Ooh let me check mine...

BEN: Step aside, Greats, we’re breaking into the scene soon with our tell­-all ­novel—All Guxjed In with Nothing to Smke, The Ben and Andrew Story.

ANDREW: Tune in next time to see us not do crack!