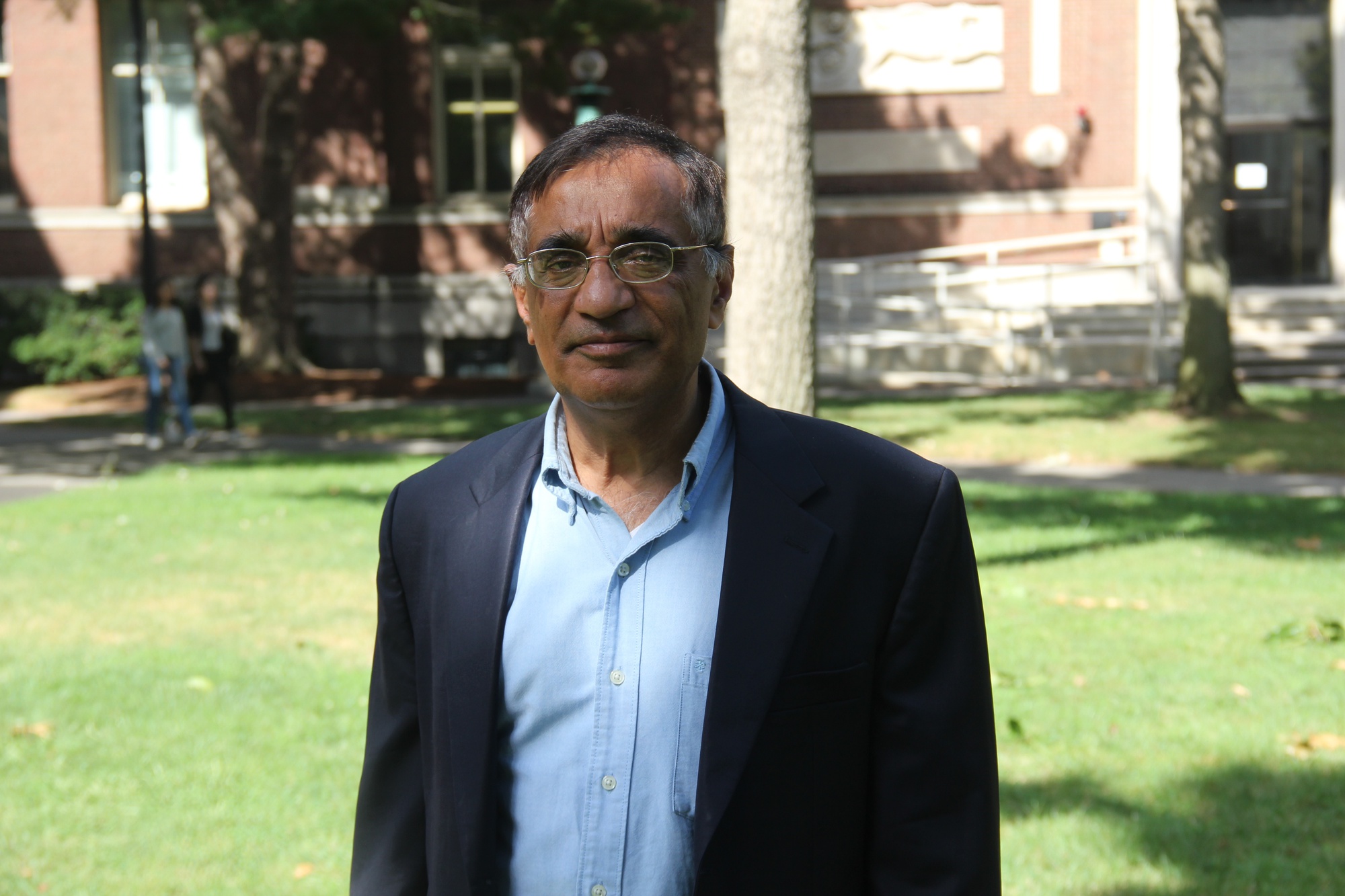 Asani views religious and cultural literacy as essential to the project of democracy.
By Joshua A. Goldstein

I meet Ali S. Asani ’77, a professor of Indo-Muslim and Islamic Religion and Cultures, on Labor Day. The Barker Center is technically closed, and as the sole occupants of the building, we climb the three flights of stairs in unusual silence. “Water or tea?” he asks me as soon as we enter his office, as if I am a familiar guest in his home.

I pause before answering—struggling to reclaim control of my eyes, which have latched onto Asani’s desk. Where tomes of reading may typically sit, atop Asani’s desk lies instead a sea of papers. Like a game of Jenga, it appears as though any paper added to the bunch may push them all over the edge. I am almost scared of moving, should my physical actions disrupt the equilibrium that exists in Barker Center 305. And yet, I sit, eager to delve into the mind behind that mound of curiosity and exploration.

Asani first came to Harvard in 1973 from Kenya, which at the time, he says, “was racially divided, marked by difference.” He faced a series of challenges to his identity: from classmates who questioned his African and Asian identities because of his skin color, or who prodded him about whether lions roamed around in his hometown of Nairobi, to faculty who held Sunni-centric views of Islam and “looked at anyone who was not [Sunni] as heretics.” Asani describes that “behind a lot of the questioning, there was a huge knowledge gap: People just didn’t know they were making assumptions.”

The current educational system has failed to provide young people with the tools to engage with difference, especially about religion and culture, Asani believes. “Religion is this phenomenon that is complexly constructed... People’s ideas of religion are really shaped by the context. So the political, economic, social, and artistic play a huge role in how religion is interpreted.” Asani describes two major signs of what he calls “religious illiteracy”: the idea that religions are monolithic and static, and the idea that people’s actions are primarily motivated by religion.

Asani views religious and cultural literacy as essential to the project of democracy. In our e-mail exchange following the interview, he reminds me of a quotation from Thomas Jefferson: “If a nation expects that it can be ignorant and free, in a state of civilization, it expects what never was and never will be.”

Asani has dedicated himself to the mission of combatting illiteracy. He teaches two Gen-Ed courses focusing on what he calls the “Silent Islam,” how most Muslims around the world experience their faith day-to-day, which stands in contrast to the “Loud Islam,” which is often co-opted by politicians for social and political means. Asani extends his teachings to an international body through his HarvardX course, “Islam through its Scriptures,” which boasts an enrollment of over 18,000 students from over 170 countries.

Outside of his own classroom, Asani was involved in the Islamic Cultural Studies Initiative for five years, which worked with teachers in different disciplines in Kenya, Pakistan, and Texas, to empower their students to think critically about religion and how it is presented. Today, Asani is a part of a working group with the Ministry of Education in Ontario, Canada that is addressing how schools teach students to think about a pluralistic society.

As our interview comes to an end, Asani tells me a story from his childhood. “When I was eight or nine years old, growing up in Kenya with all this diversity, where race and class determined your future, I asked my father: “Why did God create us different?” He responded with a verse from the Quran, which he paraphrased as saying, “We (meaning God) have created you male and female, and into nations and tribes, so that you may know one another, so that you may learn from one another.”

As I descend the stairs of the Barker Center, replaying Asani’s rich set of stories, one line rings over and over: “You label jars, you don’t label human beings.”