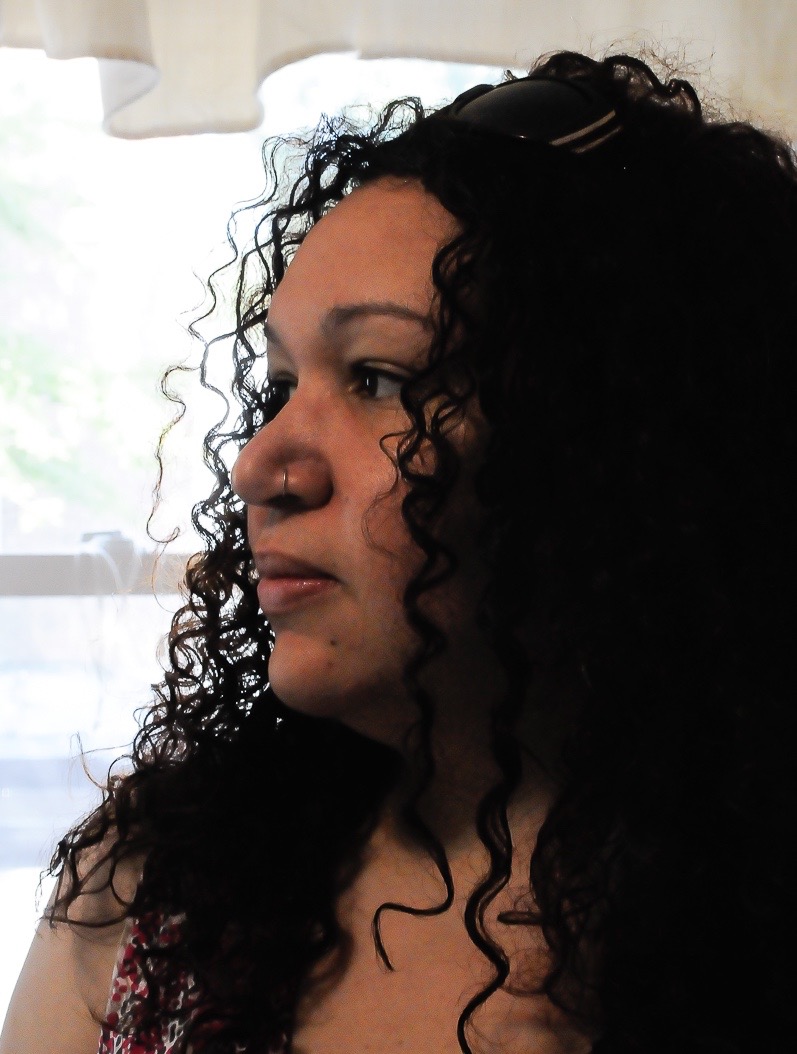 García Peña is a professor of Latino studies, one of the first ever to be hired at Harvard—a role that she describes as both a responsibility and an opportunity for innovation.
By Emma K. Talkoff

Bundled against the record-breaking cold, a group of students gathered in Harvard Yard for an unconventional class project in March of 2015. They recited poetry and prose, and placed “sacred bundles,” small burlap bags filled with ephemera, on trees. Turning more than a few heads, the students, members of “Spanish 126: Performing Latinidad”, placed a cardboard cut-out of Jennifer Lopez across from the iconic John Harvard statue.

“That is my favorite class to teach at Harvard,” Lorgia H. García Peña, who designed the course, says. For García Peña, the project—a culmination of weeks of studying global Latino identity—was a way of both engaging students and reclaiming the Yard.

“Students were sort of able to own that space, and claim it for themselves, and with artistic interventions make other students at Harvard aware of their presence,” García Peña says. “I think that’s an important part of learning for everyone—not just for Latino students, but for everyone.”

García Peña is a professor of Latino studies, one of the first ever to be hired at Harvard—a role that she describes as both a responsibility and an opportunity for innovation. García Peña and the courses she teach represent the University’s gradual move towards greater Latino studies representation after years of student- and professor-driven activism.

She also brings a unique perspective—drawing from her Dominican heritage, García Peña champions a version of Latino studies which examines intersectionality and diaspora communities. Hoping to move away from more traditional methods, García Peña’s courses explore “intersections of race and immigration at the global level,” she says.

And for García Peña, those intersections have never been more relevant. Her curriculum is influenced by factors including what she calls the current “climate of racism in the world;” her classes this semester will inevitably shift to accommodate a world that includes global immigration crises and the Trump campaign.

“Your generation, more so than mine, is very interested in ‘How is it that what I’m learning in college will help me to make this a better world?’” García Peña says. “I think there’s a lot that’s pressing for your generation.”

“Seeing the pain that my students were experiencing... We decided to create a separate space,” she says. Along with a handful of professors intent on protesting the ban, García Peña co-founded Freedom University, a “modern-day freedom school” aimed at giving a space and voice to students affected by the ban. Now in its fifth year, the program is continuing to expand.

Back at Harvard, students file into Sever Hall for the second session of "Performing Latinidad" this semester. Walking among the rows in the mostly-full lecture hall, García Peña transitions effortlessly between describing her own Dominican heritage and childhood in New Jersey, and issues taking place on a global and historic scale. It’s just the beginning, but García Peña has lofty goals for the semester.

“What I’m hoping is that people can reflect critically about where we are as a world, as a society and as humans,” García Peña says of the weeks and work ahead. “How do we look at this intersectionally, how do we look at this transnationally? Because that is how we’re thinking as humans.”