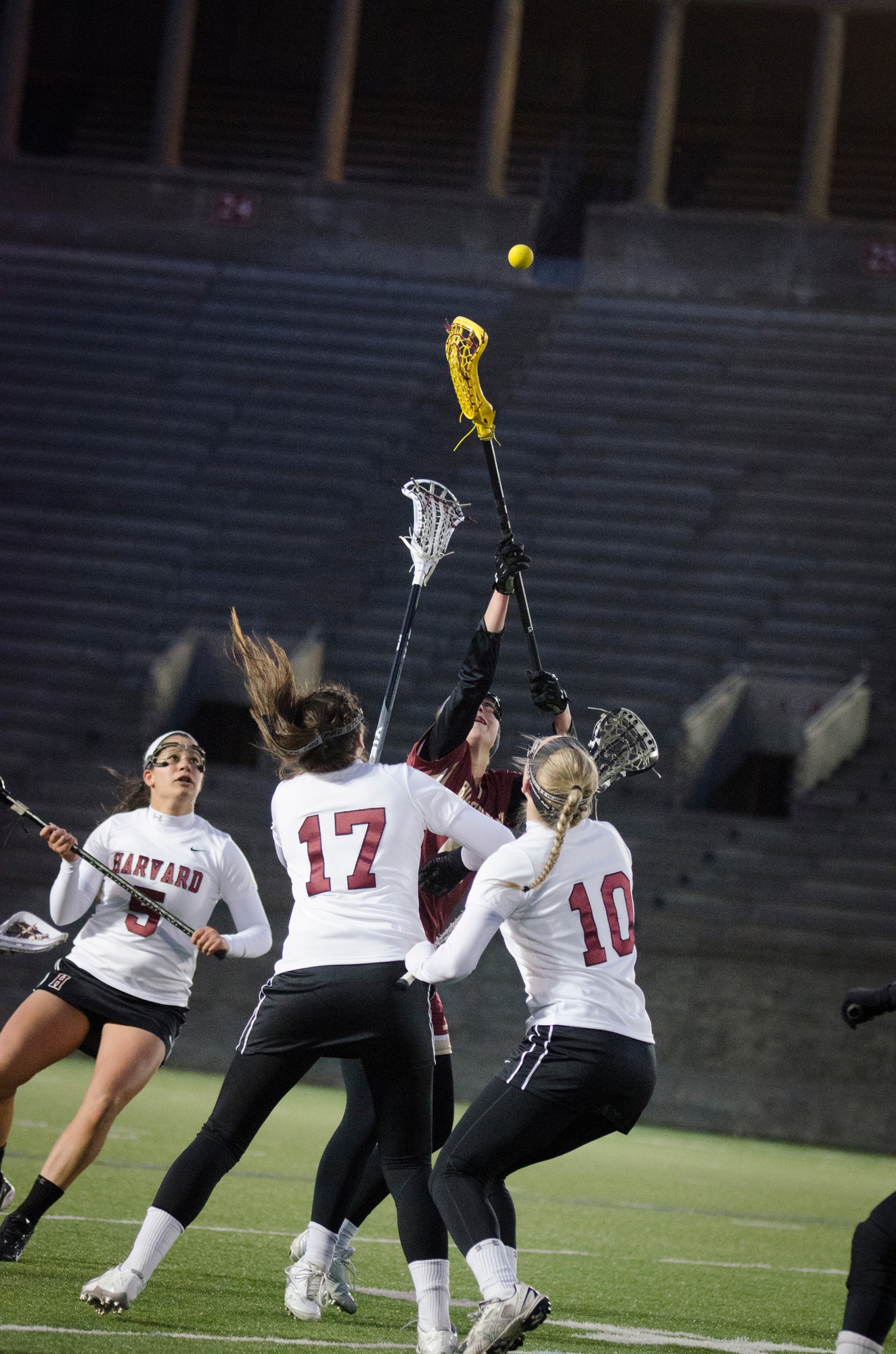 “Don’t get complacent. This game isn’t over.”
By Samantha J. Meade

My goggles are pressed tightly into my temples, yet they still slide off of my nose thanks to a slippery mixture of sunscreen and sweat.My SPF-70 zinc melts off my arms in milky beads, and we are only 10 minutes into the warm-up. After our two-lap jog, my teammates and I form lines behind the seniors on the sidelines to start our dynamic stretches. Frankensteins, flamingos, newspapers, elephants. We go through the same stretches, in the same sequence, two hours per day, six days per week.

As I transition from high-knees into butt kicks, one of the captains gives another a look: There’s too much “non-lacrosse talk” going on. The third captain urges us to stay focused, which we do, for all of two minutes. Then, conversations about homework and social drama quickly resume. Last week, everyone’s high-knees were quick, concise, and actually, well, high. Now, my teammates shuffle through the drill, moving our feet in a way nearly indistinguishable from plain walking.

We finish stretches with a lackluster 10-meter sprint and walk over to grab water and our sticks for passing drills. Another look between the captains. Walking is never tolerated, even during a water break.

We start the game with our usual flow. We win the first few draws and our key midfielders sink the first few goals in. But then we start to miss ground balls, resulting in easily-avoided goals. Soon we start missing shots and lose possession again, because our attacker didn’t stand behind the goal.

Little mistakes turn into repeat offenses. Enthusiasm from the sidelines wavers. The whistle is blown; the ref calls another penalty on my team and puts the ball into the opposing attacker’s stick. Surrounding defenders from my team idly stand by, with sticks halfway in the air, not high enough. Two defenders from my team start to swarm the attacker when the play is resumed, but the attacker slips by and charges for goal. The defenders watch around the eight-meter arc as she drops the ball in the goal. No one slid to slow her down. In practices, we are always reminded on defense that our priority is to protect our goalie from 1v1 shots on goal.

The scoreboard siren rings for half-time. We walk off the field. We still have a three-point lead.

Staring into space, I dig my hand into the Ziploc bag of orange slices and green grapes. I look up from my project when Coach Eileen starts talking.

“Don’t get complacent. This game isn’t over.”

Everyone wears the same look of guilt, masked by exhaustion and dehydration.I listen to the rest of my teammates and coaches discuss strategy and areas for improvement while I untie and retie my laces. If I tighten my cleats snug enough, then I will feel more alert, more pumped.

They must not be tight enough: The number of fumbles doubles in the second half. We win the majority of the draws but no one makes the effort to get open. Our center midfielder is swarmed by three girls, but no one presents their stick as an outlet pass. We quickly lose possession and the ball spends the majority of the game in our defensive end.

The sun sets over the opposing goal, casting a blinding glare on our offensive end. This will definitely motivate us.. We have the ball and a two-point lead. The referee, looking more exhausted than any of us, scurries over. His comb-over is matted down on his sunburned head. He is wearing a knee brace from his ankle up to his mid-thigh.

“Number six, take another step back,” the referee barks. I am number six.

We win possession of the next draw. As we pass the ball down the field, though, the other team intercepts it. They execute clean, direct passes. The defenders flee the midfield region and sprint toward the goal. The strongest player comes barreling down the field with the ball. With 15 seconds left in the game, they make one more pass and dunk the ball in the cage. This must be their underdog story.