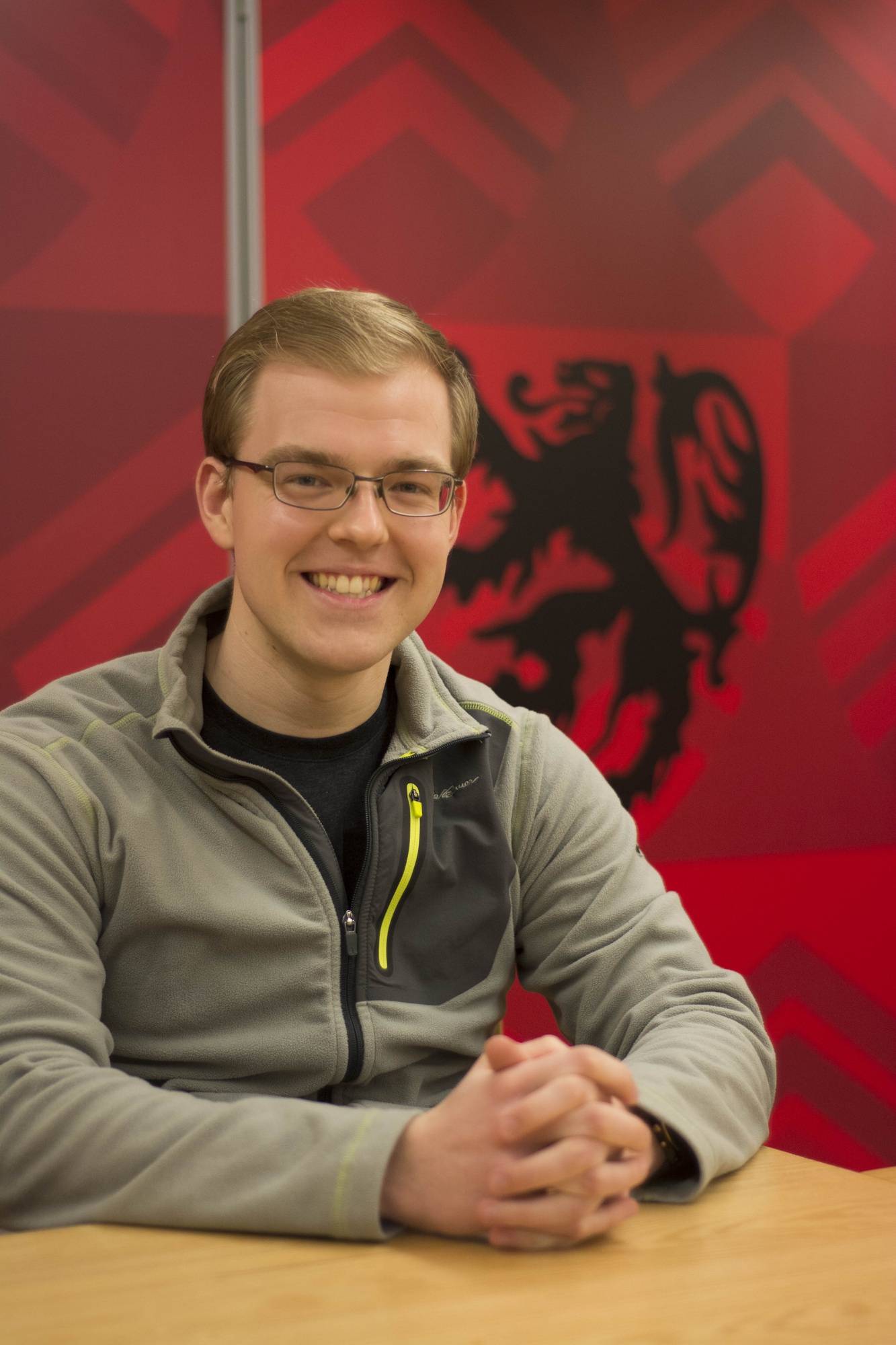 Mark Bode ‘17 is one of a minuscule group of students pursuing advanced standing—meaning he will graduate this spring, after just three years at Harvard.
Advertisement
Advertisement

Associate Dean of Undergraduate Education Noël Bisson declines to disclose the exact number of students currently pursuing advanced standing at the College, but says the contingent is “tiny.”
By Cristian D. Pleters

For most Harvard students, introductions are easy. The Harvard equivalent of the handshake is a well-worn routine: List off your House, your concentration, your class year. But after 12 months on campus, Mark Bode ’17 still did not know how to introduce himself. He recalls meeting new people and wondering, “‘Am I a sophomore? Am I a junior?’ Sometimes I would say both.”

Bode is one of a small group of undergraduates pursuing advanced standing, meaning he will graduate this spring after just three years at Harvard.

The advanced standing program—available to students who scored a five on at least four Advanced Placement classes in high school—grants those who qualify 32 Harvard credits, equivalent to eight classes. Students who activate advanced standing can either graduate early or apply for a fourth-year master’s program in select fields.

Although Harvard catalogues make reference to “advanced standing” at least as far back as 1826, the modern version of the program began roughly half a century ago. In his book “The Harvard Century,” historian Richard Norton Smith ’75 writes that the 1955 reformulation of advanced standing marked part of a larger institutional shift at the University.

During the 1950s—which Smith calls a decade of upheaval for Harvard—administrators pushed to change the school’s mission from educating the American gentry to cultivating the most academically promising American men. Harvard established the advanced standing program to help its students progress to high-level studies as quickly as possible.

Back in the 1950s, “a fifth of all incoming freshmen” participated in Advanced Standing, according to Smith. Today, far fewer students take advantage of the program. Associate Dean of Undergraduate Education Noël Bisson declines to disclose the exact number of students currently pursuing advanced standing at the College, but says the contingent is “tiny.”

Bisson says she has no general explanaion for why students choose to activate advanced standing.

Bode is candid about what pushed him to pursue advanced standing: “money.” He describes his family’s financial situation as “comfortable,” but says four years of a Harvard education would have been prohibitively expensive. Before Bode ever arrived on campus, he says, he and his parents considered advanced standing as a way to make Harvard affordable.

“I was given a choice,” he recalls. “[My parents] said they could afford three years, and if I wanted to go into debt for the last year, I could do that.

“But I’m interested in public service, and those jobs don’t pay back debt quickly, so I decided that graduating in three was the right way to go,” he says.

Computer Science concentrator Christi S. Balaki ’18, on the other hand, says she activated advanced standing for what she terms “sentimental reasons.” Balaki, who will pursue a fourth-year Master’s degree after completing her undergraduate course requirements, says career considerations did not factor into her decision.

Though Bode and Balaki say they do not regret choosing to pursue advanced standing, both note that the program requires significant sacrifice.

Bode says he realizes that leaving Harvard before his senior year—the academic and social pinnacle of college life for many undergraduates—will cost him personally.

“This is my last year, and it was just this past fall that I felt like I was really hitting my stride, and so I only get one year of that instead of two,” he says. “That’s the sacrifice that I’m making by doing this.”

This sacrifice proved to be too much for Larry Zhang ’18. Zhang, a Computer Science concentrator, initially planned to pursue a fourth-year Master’s degree in that field. After a few months, though, he decided he wanted to dedicate more time to extracurricular activities. Zhang deactivated his advanced standing and will now graduate with a Bachelor’s degree in May 2018 along with the rest of his class.

“There’s so much more out there that I want to do. There are so many other courses that I think are interesting, and I think advanced standing would take a lot away from my Harvard experience,” Zhang says. “It’s also just a lot of work. I wanted to enjoy my college experience more.”

Bode says he never took more than four classes in a semester to fulfill his requirements for graduation. At the end of this semester, he says, he will have taken all the required classes for both a Government concentration and an Economics secondary. But Bode says he never had much room in his schedule for anything else: when he graduates, he will have taken just six General Education classes and four electives.

In order to graduate with a master’s degree, Balaki says she will have to do “significantly more work” than she would have to do if she graduated with just a Bachelor’s degree. She adds she will need to take five Computer Science courses at the graduate level.

But Balaki is undeterred. “I think I can pull it off because with CS, it’s more experience—Do I know how to debug this, can I do this? I will have more experience coding,” she says. “I wasn’t as confident before, but now I am.”