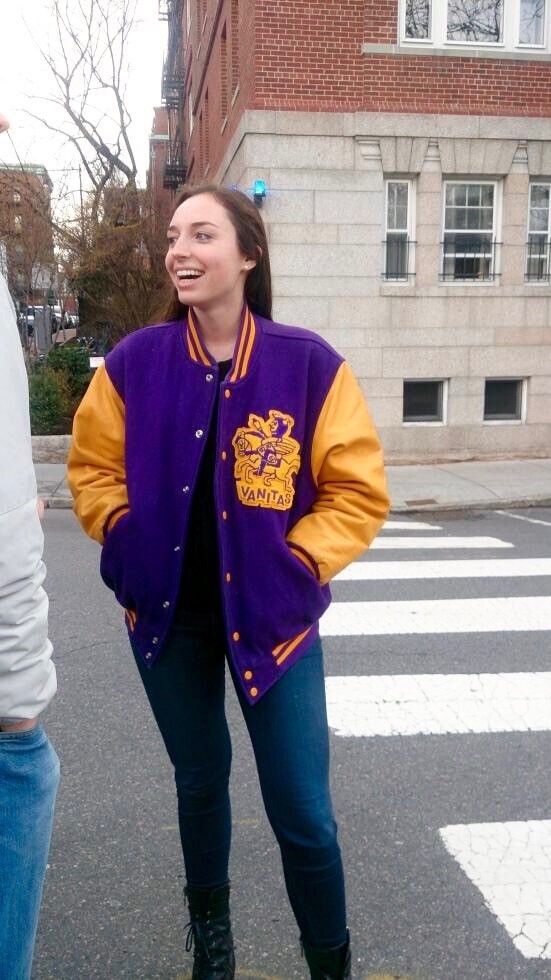 We couldn’t wait to tell the rest of the staff how we had heroically saved our sacred chair from another bout of torture by the ‘Poonsters… or so we thought.
By Mariel A. Klein

It was April 1, and the joke was most definitely on us.

As I walked home from another late-night shift at The Crimson, I noticed something fishy in the normally silent Sorrento Square: a group of shady characters emerging from the side door of the Lampoon, dragging something up Plympton St. Playing a hunch, I turned on my heels to follow. The motley crew ducked into an alley and then back to their castle. I texted Meg P. Bernhard ’17, who was The Crimson’s Managing Editor at the time and therefore still awake, and told her that I thought they were up to something.

Together, we crept cautiously into the alley and discovered a janitor’s bucket, full of steel chains, rope, and a massive bolt cutter. We knew what these were for. We grabbed the contraband and hustled back to The Crimson’s building as the ‘Poonsters chased us up the road.

We couldn’t wait to tell the rest of the staff how we had heroically saved our sacred chair from another bout of torture by the ‘Poonsters… or so we thought.

Since the 1950s, The Crimson and the Lampoon have fought a war of objects: The Crimson makes infrequent attempts to take the Ibis statue that sits atop the Lampoon’s castle, while the Lampoon crafts seemingly monthly campaigns to steal the president’s chair from The Crimson. The chair, wooden and creaky, sits chained to poles on the second floor of 14 Plympton, a prisoner of its prestige: Crimson presidents have sat in it, as have American presidents—from Franklin D. Roosevelt ’04 to the slightly less deserving Donald Trump.

Crimson presidents tend to have more responsibilities than we can count. Amid the many other tasks that come with running a daily newspaper with a volunteer staff of nearly 500, we live in a near-constant state a paranoia knowing that the Lampoon is probably hatching plans to steal our prized antique.

Each night at around 3:30 or 4:00 a.m., before I left our newsroom, I would make my way around the building, checking that each window was closed and each door was locked. I changed the lock on my office door and equipped The Crimson with a new security system.

But I could not stop the ‘Poonsters, who apparently had little else to do besides stalk outside our building. I once arrived at my locked office early in the morning to find a small blue gift box waiting on my desk. It was filled with literal shit. I came in a couple months later to find photos of The Lampoon’s president taped all over my office and the rest of The Crimson’s building; mirrors, whiteboards, and framed photos were vandalized with a dry-erase marker.

Every Crimson president has a Lampoon story to tell. The rivalry has led to international incidents, kidnappings, and one obstruction of Massachusetts state legislative business. Despite all of the changes and challenges we have faced at The Crimson in the last half-century, one of the few true constants is the prank war. It connects us to our history and to all of the 20-somethings who have worked to make The Crimson better over the years.

In the early hours of that April 1, after confiscating the bucket of break-in equipment, Meg and I retreated to our rooms, giddy with excitement.

Just a few hours later, our self-satisfaction evaporated when I received a phone call from our custodian, Lloyd McKay, who has seen the aftermath of more Lampoon break-ins than anyone. He told me we’d had a few early morning visitors—the chair was gone.

Later that day, the Lampoon’s president told me that the group would be sending its newly acquired Crimson chair into space. I dug out my own piece of Crimson-Lampoon history—a bright yellow-and-purple Lampoon letterman’s jacket—and assembled the Crimson editors for the ultimate nerd rumble. Let’s just say their prank didn’t take off.

The ingenuity shown by the Lampoon’s members in relentless pursuit of The Crimson’s most treasured possession does provide dramatic tension or, more aptly, comic relief. As professional as we try to be at The Crimson, this war reminds us that we are still college students. The rivalry is uniquely, quintessentially, and utterly collegiate.

It was a remarkable honor to sit in The Crimson president’s chair. Yet I still have some unfinished business. It involves a hydraulic cherry picker and an Ibis statue.