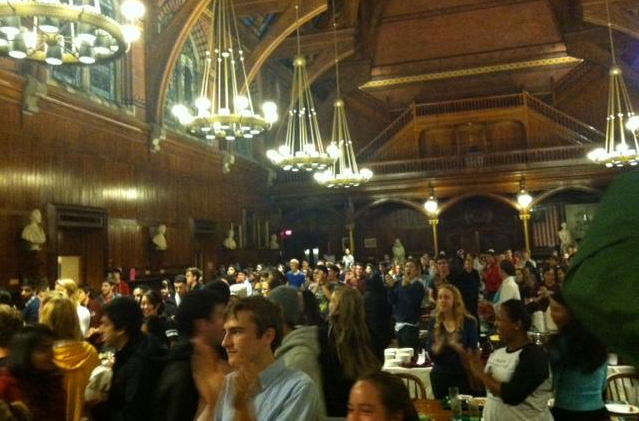 Last year, Harvard University Dining Services declared March “recipes from home” month, calling for submissions of nostalgia-infused meals to serve to Harvard diners. Not all those submissions made it to the serving line, though. FM imagines some less savory and more emotionally-fraught submissions.

Invented by my sister for when our grandfather, Pop Pop, comes over. Any kind of popcorn will do—we’ve made the dish successfully with microwave and stove-popping varieties—as long as you burn it to a crisp. The recipe is a one-two punch: First, it’s so crunchy that you can’t hear the racism he’s throwing at you over the noise; second, it tastes horrible, so if whatever he’s saying makes it past the sound barrier, you can’t focus on it anyway.

My stepdad Hans made us eat these babies three meals a day for an entire month so he could post about it on his blog as performance art protesting how many spam emails he received. All you need is two slices of bread and spam for the middle. You can add mayonnaise or lettuce if you want, although according to Hans that “ruins the integrity” of the dish. Up to you.

We don’t eat cheeseburgers in my family because we keep Kosher, which means you can’t mix dairy products and meat. The idea behind that is that you’re not supposed to boil a calf in its mother’s milk. (In this scenario, the calf is the hamburger and the mother is the cheese.)

So my mom thought of this cute news delivery thing where she served me a burger with that fake soy cheese stuff on top. I was like, “Duh, we can’t eat this because it’s a tiny cow family and God doesn’t like when we do that,” but she was like “No, we actually can,” because it’s not a real cow family that we’re eating, because the cheese was from a different mother: a soybean. Just like me! Because I was adopted! Surprise! Turns out I’ve been a confused calf living with fake soybean parents my whole life and didn’t even know it. Haha. Sorry, am I oversharing? My mom says I share too much with people I don’t know. My fake mom, not my real mom. Haha sorry, I’m sorry, the recipe is just a burger with soy cheese.

The Dish We Make for My Annoying Cousin Who Makes a Big Fuss at Thanksgiving If There Aren't Any Gluten Free Options, or Whatever His Diet Is This Year

Peas. It's just peas. No seasoning. Suck on that, Lester.

Yeah, this isn't a recipe, but every time I try to tell someone on the HUDS staff about it, we’re within earshot of the soup ghost, so I don’t know how else to make contact. I’m not trying to be melodramatic, but every time I try to get ravioli soup, I hear a disembodied voice yelling at me and it’s really messing with my dining experience. Please check it out. Thank you.