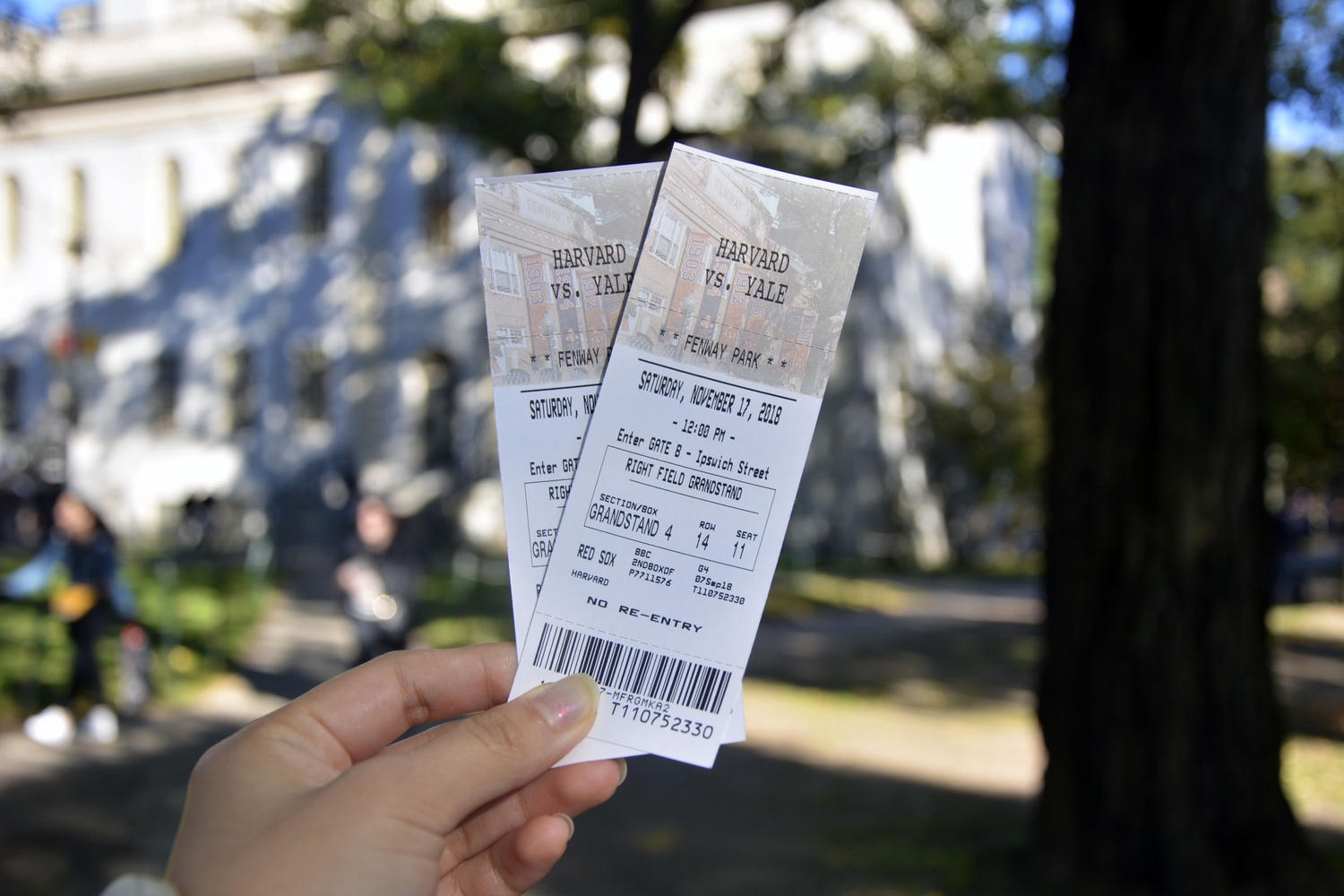 This year has seen a spike in student attempts to sell their tickets to the Harvard-Yale football game. By Anthony Y. Tao
By Camille G. Caldera, Juliet E. Isselbacher, and Ema R. Schumer, Contributing Writers

So many students have tried to sell their College-allotted tickets to the Harvard-Yale football game this year — a violation of Athletics Department policy that typically goes unnoticed and unpunished — that some resident deans have begun admonishing students over internal House email lists.

The Harvard ticketing website states that “Undergraduates can claim one ticket for their personal use. No guest tickets will be available for sale. Students may not sell their claimed ticket to a member of the general public or other students.”

“We take this [policy] seriously and expect our students to comply,” Athletics Director Robert L. Scalise wrote in an emailed statement.

Despite the policy, at least a hundred students have attempted to sell their tickets for amounts ranging from $25 to over $200. Most advertised their tickets on House email lists or on a public Facebook event page.

Maxwell K. Ho ’21 offered his ticket up for $115 “OBO” — slang for “or best offer” — over the Eliot House email list. He said he was unaware Harvard forbids resale.

“In my one year of experience, the game was the least fun part of the entire fiasco,” Ho said. “The $50 plus is worth a lot more to me as someone who is strapped for cash. I'd rather use that money to go to a restaurant or something of the like with my friends.”

Aside from financial motivations, students attributed the spike in ticket scalping to the fact that this year, in a break with tradition, the Game will be played not in Harvard Stadium but in Fenway Park. And, unlike in the Stadium, Harvard undergraduates will face strict ticketing rules in the famed Boston baseball shrine.

Fenway Park policy stipulates that all students must sit in assigned seats during The Game. If students wanted to sit with a particular group of friends, they had to pick up game tickets together as a group.

So far, undergraduates do not appear particularly pleased with new rules. Students previously complained to administrators that Fenway's rules are inconvenient and deleterious to the overall experience.

“If they’re forcing us to do all of this assigned seating, then they should know that the outcome is that people are going to want to sell their tickets,” Guadalupe M. Jacobson-Peregrino ’21 said. “People are going to want to sell and buy tickets so that they can all sit together. It’s just an outcome that was destined to happen once the Fenway Park assigned seating happened.”

Winthrop Resident Dean Linda D. M. Chavers wrote in an email to her House that “students who attempt to sell tickets may even be referred to the Office of Academic Integrity and Student Conduct.”

The Office of Academic Integrity and Student Conduct did not respond to requests for comment.

In her email, Chavers underscored The Game’s role in fostering a sense of community among Harvard students.

“Instead of being an anonymous resource that you are free to dispose of as you wish, the purpose of offering each student one ticket is to provide an opportunity for you to build your community and enjoy school spirit together,” she wrote.

Some students said the ticketing rules specific to Fenway Park have already eroded a sense of community. They suggested ticket resale might help restore it.

“Let’s say if someone from Harvard isn’t going to the game, and there’s a friend of yours whose friend is coming to Harvard and wants to get a feel of Harvard, then that’s a perfect opportunity, just give him your ticket,” Mustafa Bal ’19 said. “Give it or sell it; work it out with him. I don’t think that’s a big deal. That shouldn’t be a big deal.”

Chavers and other resident deans also reminded students that the free tickets are a “gift,” though some students said they disagreed with that idea.

“There’s a feeling that they’re not gifted to us. They’re part of our tuition probably, somewhere in there,” Ilan M. Goldberg ’20 said. “Not in a spoiled way.”

By contrast, Yale undergraduates must pay $25 per ticket.

Jacobsen-Peregrino said the new ticket policy and the sale of those tickets over email lists marks a departure from a storied Harvard tradition.

“You take one part of the tradition and it feels like everything starts to crumble,” she said. “I think it’s disheartening to the administration because they see all of these kids who would rather make money off of tickets then go to a game where they can’t sit with their friends.”