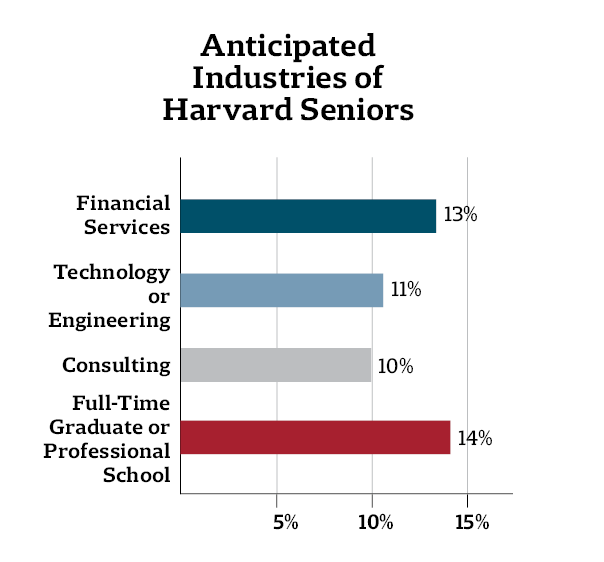 Despite administrators' repeated entreaties, Harvard is still struggling to convince its graduates to go into public service.

Seventy-two percent of Harvard College’s Class of 2018 planned to enter for-profit jobs after graduating last May, according to the most recent employment report released by the College’s Office of Career Services.

Each year, OCS releases a report detailing the future plans of Harvard’s newest graduates. Ninety-eight percent of the Class of 2018 responded to the OCS survey, which asked questions about their careers, employment locations, and any fellowships or grants they had earned. Eighty-seven percent of seniors “answered the relevant questions,” according to the report.

Newly installed University President Lawrence S. Bacow pitched the importance of public service to alumni and students during his first trip to Washington, D.C. as president this summer. And, in his inauguration speech earlier this month, he reiterated his commitment to to increase funding for undergraduate public service internships.

The idea of immediately enrolling in graduate school seems to have fallen out of vogue at Harvard, according to OCS Director Robin Mount. Fourteen percent of graduating seniors last May said they planned to attend a full-time graduate or professional school, down from 19 percent in 2017.

“About 83 percent of our students will go back to graduate or professional school,” Mount said. Mount describes life after graduation as “a 10-year journey of sort of discovering what you’re interested in, what questions you want to try and answer, where you feel you can make an impact.”

The senior job report also showed that jobs in technology have overtaken consulting in post-grad popularity. The percentage of students going into tech has steadily grown; six percent entered the field in 2013, compared to 11 percent in 2018.

Six percent of the Class of 2018 indicated they were unsure of their future plans. OCS provides guidance and advising after graduation specifically targeted to students suffering from professional indeicison.

After a six month follow-up, “we offer them special help with one of our advisers who’s in the area closest to what they’re interested in,” Mount said.

In line with previous trends, the Class of 2018 showed a clear preference for the country's coasts.

The plurality now reside in New York, Massachusetts, and California. Members of the class can also be found on six continents, with several dozen students in the UK and in China.