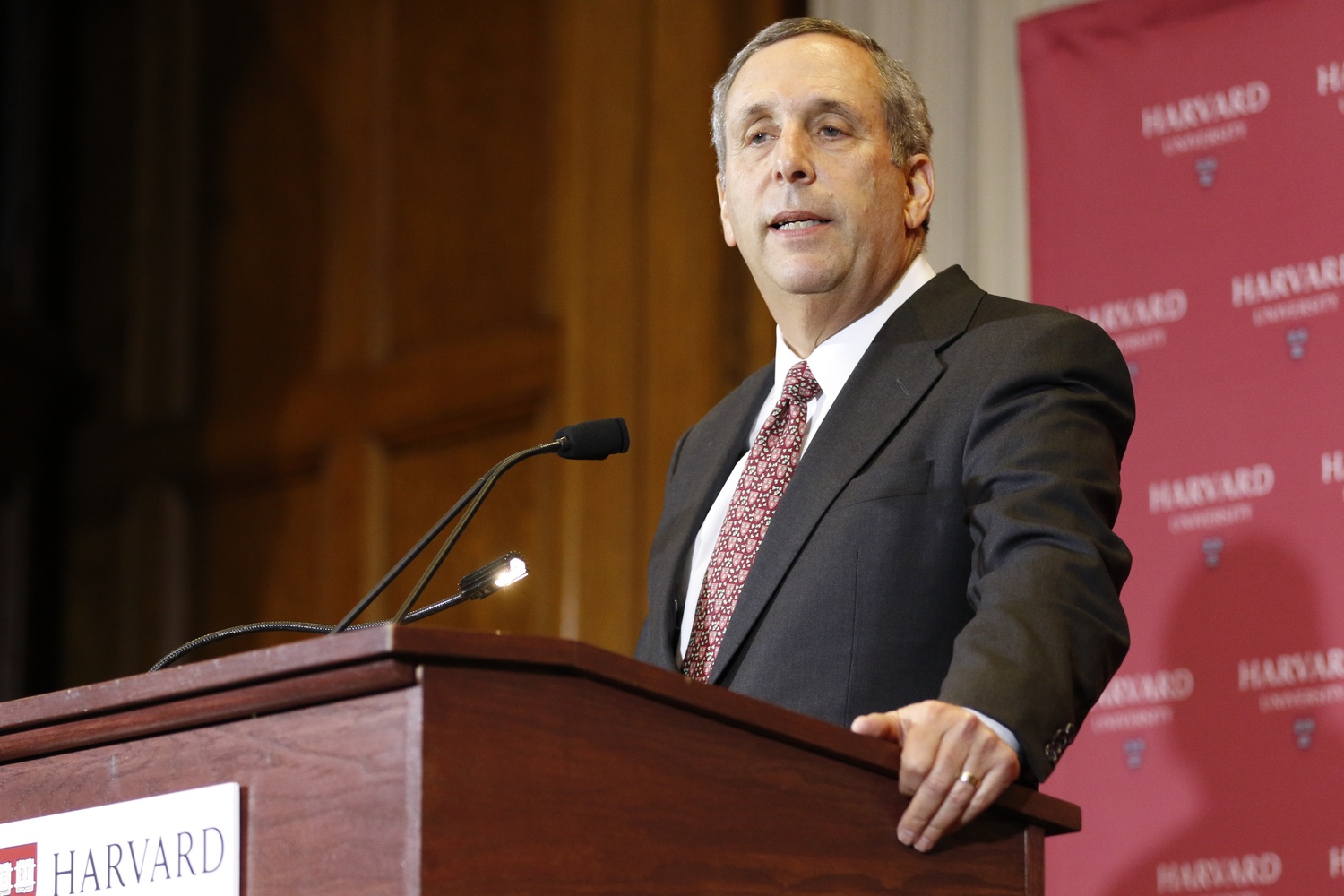 University President Lawrence S. Bacow spoke to lawmakers and Harvard affiliates on both sides of the political aisle during his first trip to Washington as Harvard’s president last week, pledging to champion higher education.

Bacow told students, alumni, and lawmakers assembled at the National Portrait Gallery Thursday evening about his plan to advocate for not just Harvard, “but for all of higher education.”

The two-hour event, hosted by the Institute of Politics’ Summer in Washington Program, drew a crowd of nearly 500 guests, many of whom were College students interning at public service organizations and political offices.

Addressing the crowd for the first time as University president, Bacow told attendees the values of colleges and universities have “enabled the American dream for so many of us” and that is it “important that we not let that dream die.”

Bacow also discussed the importance of public service and recounted how he had initially wanted to work in the Jimmy Carter administration after earning his master’s in public policy from the Kennedy School in 1976; he ended up taking a job at MIT instead.

“After meeting President Bacow for the first time, I can see that he is an extremely captivating man, who is clearly very accomplished. I look forward to getting to know him and learning more about what he envisions for Harvard’s future,” Toomey said after meeting Bacow at the event.

Van Hollen was among the group of six senators who sent Faust a letter in May, which called on her to increase opportunities for students across the University to work in public service summer internships.

Former Dunster House Resident Dean Carlos E. Diaz-Rosillo, the senior deputy chairman of the National Endowment for the Humanities, also attended the event, which he said was a “great sign” of Bacow’s commitment to public service. Diaz-Rosillo departed Harvard in Jan. 2017 to work in the Trump administration, which he left in June.

“To have his first public event as president, to come to the nation’s capital to meet with alums and students who are doing great work in public service, I think it’s a great tribute to the importance of public service and to the emphasis that he’ll play as president,” Diaz-Rosillo said.

Bacow emphasized the importance of working across party lines during his remarks and told the crowd that he looked forward to working with them “in years to come.”

“We all have to work together: liberals, conservatives, Democrats, Republicans. It is our responsibility to make sure that we leave this country and this world a better place than we found it,” Bacow said. “It is an honor beyond words to be part of this journey together with each and every one of you.”

After meeting with Bacow on Wednesday, Markey posted a photo on Twitter of the pair shaking hands.

“Always great to meet with new @Harvard President and my friend Larry Bacow to discuss how to expand access to education and increase federal investment in research to drive innovation and achievement,” Markey wrote.

In an interview Monday, Neal said his meeting with Bacow was “very productive” and that the two had discussed the university endowment tax his Republican colleagues passed last year, among other topics.

“He certainly expressed his views on the endowment tax and those are views that I share,” Neal said. “I said I thought the tax was punitive and he agreed with me.”

Lindsay Nothern, Crapo’s press secretary, said on Monday the senator’s meeting with Bacow was a “get to know you” affair, during which the two had a “good conversation on a number of topics.” Nothern added that there was “nothing specific” on the meeting’s agenda.

Clark wrote in a statement Monday that it was a “pleasure” to meet with Bacow.

“He is a living testament to the power of education and its ability to open doors and minds,” Clark wrote. “I am eager to see how his leadership and vision will invigorate Harvard, Cambridge, and higher education overall.”

Markey, Crapo, and Schumer co-signed the May letter to Faust regarding public service funding.

Kennedy School alumnus Joseph B. Tompkins, Jr.—Bacow’s former classmate who attended the National Portrait Gallery event— said he approved of Bacow’s intentions to do more “outreach” during his presidency, mentioning Bacow’s plans to visit his hometown in Michigan on behalf of Harvard.

“[It’s] good to reach out and not just worry about what’s going on in Cambridge,” Tompkins said.

A previous version of this article incorrectly stated that Carlos E. Diaz-Rosilo is the chairman of the National Endowment for the Humanities. In fact, he is the senior deputy chairman of the NEH.