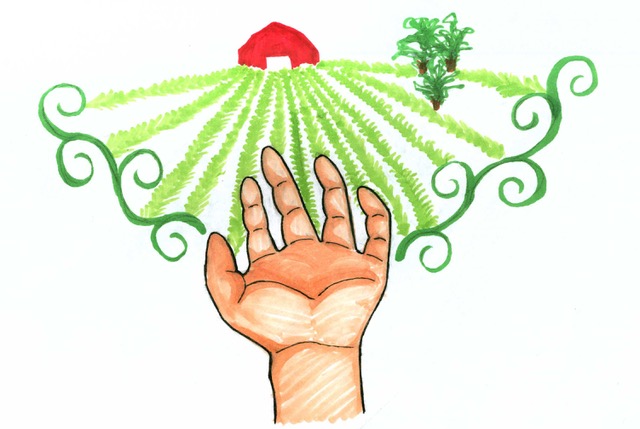 I’m really just from a slightly more religious slice of generic America, not whatever people imagine Alabama to be. Maybe I should say I’m from Omaha, Nebraska. It feels just as true.
By Drew C. Pendergrass

Although I can’t imagine his face, I must have met my great grandfather the summer I first tasted pickled watermelon rinds. They were sour and cold, and I ate them as I sat on his front porch, my legs still too short to touch the ground. I remember seeing his farm extending for miles, or what seemed like miles, dotted with peanut plants and vines of fruit.

My great grandfather, according to everyone who knew him, had a sorcerer’s ability to breathe life into the scorched red clay of Winston County, Alabama. He was never satisfied with the practical crops like turnip greens, which grow happily for any unskilled farmer. With his wrinkled hands, he managed to summon fields full of enormous, yellow-fleshed watermelons, a special variety he bred himself. I never understood how they didn’t shrivel into gas in the sun.

I remember vividly the things my great grandfather touched — the farm and the plants, the barn cats, the giant pots of boiled peanuts — and, because he and my great-grandmother never wasted anything, those jars of white rinds lining the walls of the pantry. I remember his sturdy leather work coat and the little notebook he always kept in his chest pocket. I remember his hands, weathered and dark from the sun, and how his skin turned pale at the wrist because he wore long sleeves even in the summer. But, because it has been so long, I can’t remember his face.

When I tell people I’m from Alabama, the response is usually an involuntary, almost-whispered “Oh.” This “Oh” conveys both sympathy and mild distaste, as if I have revealed I have athlete’s foot. After the “Oh” comes the dreaded question: “What is it like, you know, down there?” This is an insane thing to ask in small talk, because the only good way to describe what the South is really like is via a Great American Novel. Because I am not Toni Morrison, I usually make a joke about how the stereotypes are 60 percent true and change the subject.

Here’s the secret about the South: It isn’t that different from anywhere else. Consumer culture and wage labor have made most places in America more or less interchangeable. People in the South listen to the same music, shop at the same chain stores, and are miserable for basically the same reasons as people in Massachusetts. We wear shoes, and only weird people talk about the Civil War. My hometown looks like any other hometown in America, except there are three times as many churches.

No one is more horrified by this secret — their indistinctness — than Southerners, who have staked their identity on being fundamentally distinct from the rest of the country. This is why so many men in Alabama drive lifted trucks that are inexplicably covered in mud. A friend and I once tried dip because it captured the vague and directionless self-destruction we associated with the real South. Whatever genuine Southern-ness there was has been replaced by a copy of Southern-ness, as obviously fake as bad country music. This is not to say that the South isn’t different on the surface. But whatever difference there is stretches no deeper than a Garth Brooks lyric.

The other day I was talking to a friend who is also from the South, and he mentioned how, when he was young, he helped his dad birth a calf on their dairy farm. My immediate response was a very weird jealousy. How can I call myself Southern when I haven’t midwifed a single hoofed mammal?

After my great-grandfather’s funeral, a number of people from around Winston County told us about his turnip greens. If you have never heard of these, turnip greens are perhaps best explained as kale that hasn’t been gentrified. My great grandfather, who struggled to makes ends meet himself, had a policy that anyone could come onto his farm and take as many turnip greens as they wanted. As long as he was farming, everyone in Double Springs knew they would have something on the table for dinner.

I have no claim on the kind of life my great grandfather lived. I did not grow up on a farm, and I have never lived in the country. I don’t have the accent. Even my memories of my great-grandfather have a sort of falseness to them — I don’t know which are mine and which are family stories I’ve imagined so vividly that they’ve become like memories.

The other day I did a silly thing: I bought a brown work coat online because it reminded me of the one my great grandfather wore. Buying clothes is often a way to telegraph some part of ourselves to the world: shallow, but no shame there. It felt like a small betrayal to wear a mass-market copy of my great-grandfather’s jacket. Like saying that I could become the sort of person he was if I did something as meaningless as wear a certain set of clothes.

When I met new people this summer, I told them I was from Boston. Small talk about the weather (“Boy, how about those winters!”) is far more pleasant than small talk about what people imagine to be true of a large and diverse geographical region they have never visited (“So, are you racist?”).

In any case, it seems more honest to say I’m from Boston. There isn’t the same weight there. It is technically true that I am from Alabama; and that my family has lived in Alabama for generations; and that I grew up next to a cattle farm. But I’m really just from a slightly more religious slice of generic America, not whatever people imagine Alabama to be. Maybe I should say I’m from Omaha, Nebraska. It feels just as true.

But, when I think of my great grandfather, I want to claim the South as my own. Or, at least, I want to claim the idea of the South that I think he embodied — a simple life, a rootedness in a place, and deep care for other people. He was, in my mind, the real deal. Of course, I’m just doing what the rest of the country does to Alabama — putting enormous symbolic weight on the shoulders of someone I don’t really know.

But when I remember his boiled peanuts, and the barn cats sunning themselves in the heat, and those fields of yellow watermelon, I feel that there’s something worth saving.