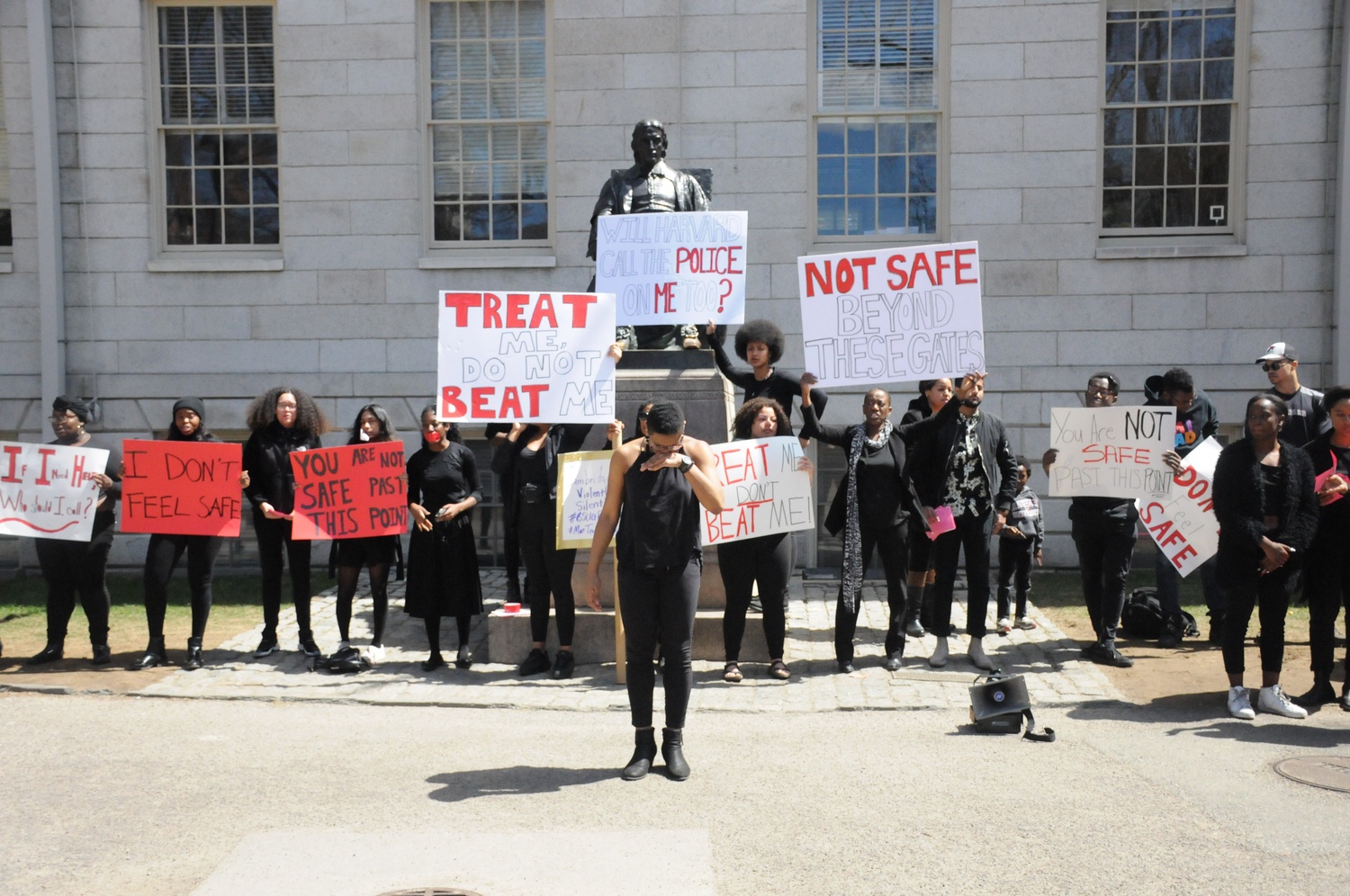 The chief of Harvard’s police force said in a report released Tuesday that he would have preferred University police officers respond to calls made April 13 about a black College student whose arrest by Cambridge officers later sparked allegations of police brutality.

The night of the arrest, the Harvard University Police Department initially did not send officers to the scene and instead contacted the Cambridge Police Department. CPD officers arrived at the scene and forcibly tackled the student to the ground and punched him several times. In the wake of the incident, some undergraduates said they wished Harvard police had handled the situation from the start.

The student — who was naked and likely under the influence of narcotics — was arrested while standing on a street median a few feet from the boundaries of campus, meaning he was technically outside HUPD’s jurisdiction and within CPD’s. In the weeks and months after the arrest, Harvard repeatedly cited this geographical distinction as the reason why CPD officers responded to the calls.

HUPD Chief of Police Francis “Bud” D. Riley said in the report, though, that his department would typically have responded to the calls and waited for CPD. He said HUPD was understaffed April 13 due to an unexpected spike in the number of medical transports. The student was arrested on the night of Yardfest, Harvard’s annual spring concert.

“If HUPD had been less busy, it ordinarily would have responded to an incident involving a student that close to campus and stayed at the scene until CPD arrived,” Riley said in the report.

Riley made these remarks in a report authored by a Harvard committee tasked with reviewing the events leading up to and following the night of the arrest. The report, emailed to students by University President Lawrence S. Bacow Tuesday, outlines a series of recommendations for HUPD, Harvard University Health Services, and administrators meant to “foster institutional improvement.”

The report calls on HUPD and HUHS to clarify their policies related to student medical emergencies. It also suggests several small changes to Yardfest in an effort to combat undergraduates’ tendency to use drugs and drink heavily at that event.

Former University President Drew G. Faust established the committee — chaired by Harvard Law School professor Annette Gordon-Reed — after the April 13 incident to reflect on the arrest and undertake a “systematic examination” of an array of University policies.

The forcible arrest of the student roiled campus and attracted national attention. Most of the controversy centered on CPD’s physical treatment of the student. CPD officers ultimately arrested the student for a number of charges including indecent exposure, disorderly conduct, assault, and resisting arrest.

The charges were later dropped in May, according to the student’s lawyers.

A video of the incident published by CPD depicts officers talking to the student for at least two minutes. The student then takes two steps towards an officer before stepping back. The video shows the student raising his arms to chest-level before an officer tackles him from behind. The officer delivered five punches to the student’s stomach area in an effort to unpin his arms and handcuff him, the police report states.

Hours later, the Harvard Black Law Students Association released a statement condemning the incident as an example of “police brutality.” Days later, students at the College organized a new campus group dubbed Black Students Organizing for Change, which held a protest that attracted more than 200 attendees. BSOC also released an open letter containing a list of demands for change.

The review committee investigated the context surrounding the arrest, focusing specifically on Yardfest. The group’s final report noted that Yardfest made a “significant” and “unexpected” demand on Harvard and Cambridge medical resources.

In 2018, Yardfest saw 17 medical transports, more than five times the number of transports that occurred the year before. All transports were for intoxication or overdoses. Both Mt. Auburn Hospital and Cambridge City Hospital became so “overloaded” that they refused to accept several intoxicated Harvard students that night, Bacow wrote in his email.

Bacow wrote in the email that he is “troubled” by student behavior at Yardfest 2018.

“More generally, the report serves as an essential reminder about how interconnected any community is—how one person’s actions can have profound implications for others—and underscores the need for all of us to be cognizant of our responsibilities both to ourselves and to the broader community,” Bacow wrote.

Dean of the College Rakesh Khurana also flagged the high rates of drug and alcohol use at Yardfest as problematic in an email sent to College students Tuesday.

“Current data – as well as some of the evidence presented in the report about Yardfest – indicates an increased use of drugs and alcohol in our community, as well as an increase in related dangerous behaviors,” he wrote. “While we are a community in which individual responsibility matters, we also have a collective responsibility to provide support and resources for students in times of need.”

The committee recommended several updates to Yardfest in order to make the event safer for students. The group’s report proposes Harvard consider alternate times for Yardfest, specifically Sunday afternoons. The report also suggest that the College ensure water is available throughout the event, not allow for re-entry to the concert, and enforce a strict “no bag” policy.

The report suggested HUPD clarify its role in responding to incidents involving Harvard students. The committee wrote that the department should “communicate clearly and accurately” about their role in emergency situations both on and off campus.

In response to one of BSOC’s demands — that Harvard create special response teams not involving police — the committee proposed that HUPD and HUHS work together to explore hiring mental health professionals as first responders.

The report also included several recommendations specifically targeting issues of mental health and substance abuse on campus. The report suggests that HUHS work to promote awareness of its programs under the Office of Alcohol and Other Drug Services and Counseling and Mental Health Services.

HUHS, like HUPD and CPD, drew criticism from some students for its response to the April 13 arrest. A friend of the arrested student first called HUHS to report that the student required urgent medical care. HUHS then contacted HUPD, which transferred HUHS to Cambridge Emergency Communications.

In the wake of the arrest, some students argued HUHS should not have contacted the police. The report noted, however, that it is University policy that the police respond to all emergency calls made to HUHS. Another criticism levied at HUHS was that CAMHS did not offer the mental health services that some students said they needed in the aftermath of the arrest, according to the report.

“In the wake of the incident, a number of students, particularly from marginalized groups, felt stress and a need for mental health services that they do not feel exist,” the report reads. “Some students voiced concerns both about the availability of services, particularly mental health services, and about demographics and multicultural competency of the clinical staff.”

In an effort to address these issues, the committee recommended that HUHS expand its informal counseling services and seek feedback from students on barriers they face when seeking care at CAMHS. The report suggests that House and Yard staff undergo training for “multi-cultural competency in mental health support” and regularly review cases with CAMHS staff.

Though BSOC called on Harvard to run a student-staffed ambulance, the report recommends against a private ambulance.

“We were told that it is highly unlikely that an ambulance for a private institution would be approved today,” the committee wrote. “Additionally, conversations with both HUHS and HUPD suggested that even if permission could be secured, a Harvard ambulance would not be desirable or practical given liability concerns and discomfort some students may feel with being treated by their peers.”

CPD and the City of Cambridge are also conducting their own reviews of the arrest. Per department policy, CPD conducts an internal investigation whenever an officer uses force. The City of Cambridge hired Roderick L. Ireland, the first African-American appointed Chief Justice of the Massachusetts Supreme Judicial Court, to direct its own independent investigation, the results of which will be made public.

Khurana offered an initial timeline for implementing the recommendations included in the report in his email to students. He wrote that he has already instructed the Dean of Students Office to work with HUPD and HUHS to enact the report’s suggestions.

“President Bacow has asked the College to provide concrete plans by the beginning of the next semester for implementing these recommendations,” Khurana said. “In the coming months, we will communicate the next steps we will take to address the recommendations.”