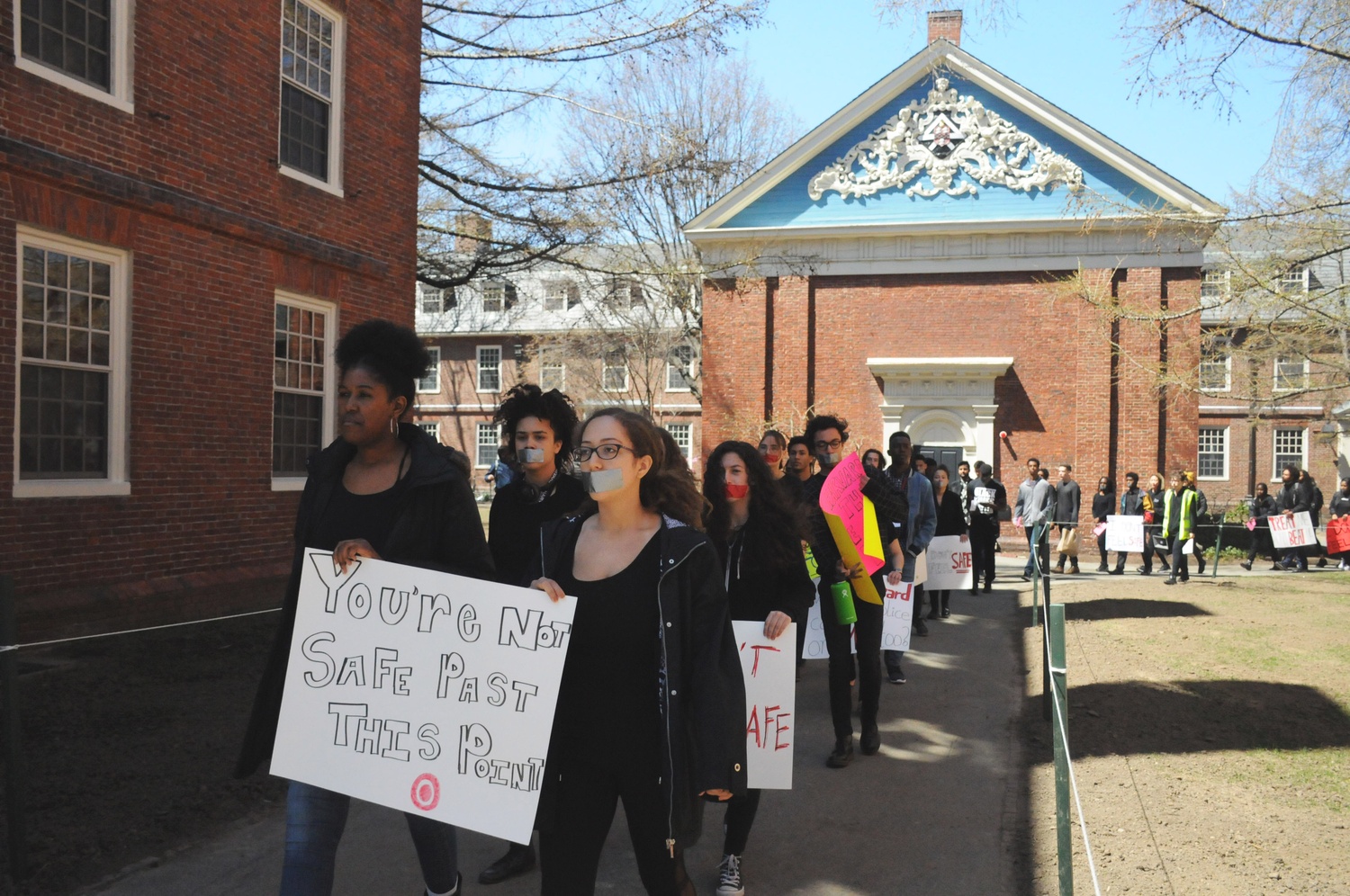 Members of Black Students Organizing for Change call for reform to Harvard policies at a protest following the arrest of a black undergraduate. By Delano R. Franklin
By Angela N. Fu, Crimson Staff Writer

More than 300 Harvard affiliates and 22 student groups have signed an open letter to the University demanding reform to certain Harvard structures and policies some say led to the forcible arrest of a black undergraduate April 13.

The arrest sparked allegations of police brutality and protest across campus. The authors of the letter, a group of College students who call themselves Black Students Organizing for Change, first joined together days after the arrest in an effort “to hold Harvard University accountable for the safety of community members, particularly Black and Brown students,” according to the text of the letter, first released last week.

“When we stepped foot onto this campus as freshmen, Harvard University assured us that our safety was its top priority,” the letter reads. “This incident demonstrates, among other things, that HUHS and HUPD are not adequately equipped to protect and assist students in the ways that they should—in the ways we were promised they would.”

Though Cambridge Police Department officers arrested the student on April 13, HUHS and HUPD were the first to receive notice about the student, according to a timeline provided by CPD. HUHS received a call from one of the student’s acquaintances who said he needed medical care. Minutes later, HUHS contacted HUPD, who then notified CPD because the student was not standing on Harvard's campus—meaning he was not under HUPD’s jurisdiction.

The student was found standing naked and likely under the influence of narcotics on the corner of Massachusetts Avenue and Waterhouse Street, an area only feet from the Law School, though not part of campus.

After CPD officers arrived at the scene, they spoke briefly with the student before one officer tackled the student to the ground and delivered five punches to the student’s stomach in an effort to handcuff him, according to the CPD police report.

A video of the incident later published by the New York Times shows the student standing still, surrounded by four officers, while the officers talk to him for several seconds. The student turns around and takes two steps towards one officer before taking a step back and raising his arms to chest-level. Another officer then tackles the student from behind.

The BSOC letter calls the incident an example of “excessive force” and states that the University’s response was “neglectful” and “unacceptable.”

“As calls for help from Black and Brown folks are frequently met with police violence, students increasingly mistrust law enforcement. HUPD and HUHS’s inability to respond to the student’s medical emergency and CPD’s use of excessive force has only reinforced that sentiment,” the letter reads.

The letter includes a list of demands for the University. Broadly, the letter asks that Harvard support “any and all of the student’s needs” and that the University publicly acknowledge its “inadequate” protocols, which BSOC states have jeopardized the safety of students of color.

Law School professors Ronald S. Sullivan Jr. and Dehlia I. Umunna are currently acting as the student’s attorneys. An arraignment date has not yet been set.

"As President Faust wrote in a message to the entire Harvard community earlier this week, we are committed to determining what Harvard, as an institution, can learn from the incident so that we can move forward together as a community 'where people from all backgrounds and life experiences can come together confident in their ability to do their best work in a safe, supportive, and constructive environment,'" Jackson wrote, quoting Faust's email.

Jackson further quoted Faust's assertion that work going forward will and must necessitate "hearing directly" from students, faculty, and staff.

“We will continue to build on the important discussions that have already taken place across the University since last week’s incident, including conversations involving students, faculty, leadership of the University, College, graduate schools, the HUPD and HUHS,” Jackson wrote.

BSOC’s letter also includes several demands specifically for HUHS, including the acquisition of an ambulance, the expedited hiring of black and brown counselors at Counseling and Mental Health Services, and the designation of all drug- and alcohol-related calls to HUHS as medical emergencies.

HUHS spokesperson Michael Perry wrote in an emailed statement last week that HUHS and the student-led EMT group Crimson Emergency Medical Services have spoken to Cambridge city officials in the past about the possibility of acquiring an ambulance but were unsuccessful.

“Presently, Cambridge officials have determined that Pro Ambulance, our local ambulance service, is the most appropriate service readily available to the Harvard community,” Perry wrote.

Perry added that HUHS is “committed” to hiring a “diverse cohort of counselors.” He pointed to the recent hiring of an African-American and Latino counselor this semester as an example of HUHS’s commitment.

“HUHS recognizes the importance of offering a diverse counseling and mental health services staff that can meet the specific needs of all members of our community,” Perry wrote.

BSOC has also called on the University to provide mental health response training to all HUHS dispatchers and HUPD officers.

The last of BSOC’s demands—of which there are 10 in total—calls on the University to acknowledge and commit to the demands in writing by May 1.