Harvard's Government department hopes that two new tracks — in Tech Science and Data Science — will not only widen the scope of what affiliated students study, but offer an antidote to the field's diminished popularity.
By Sonia F. Epstein and Sam E. Sharfstein 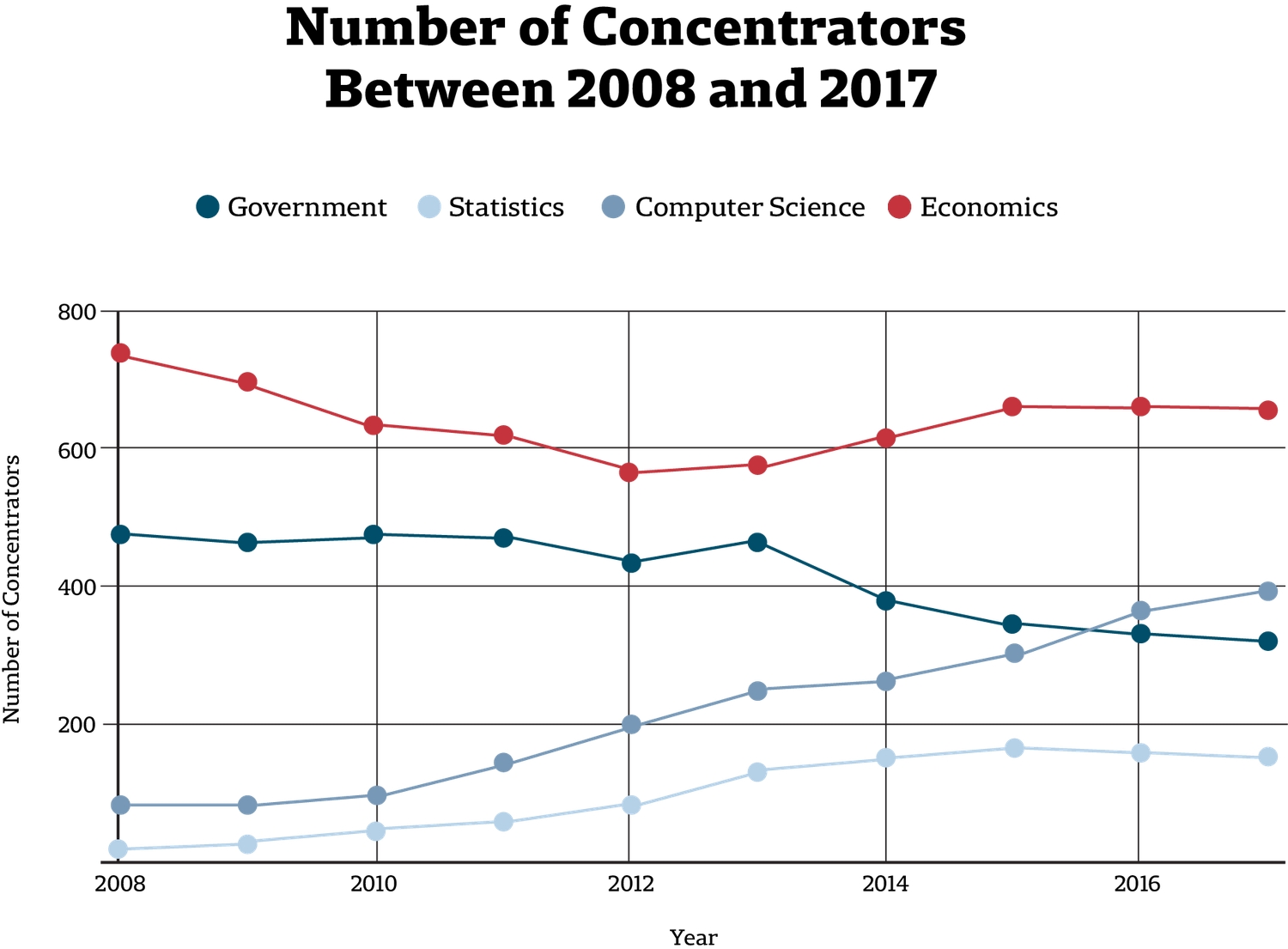 Priscilla W. Guo ’18 did not want to concentrate in any of Harvard’s 50 undergraduate programs.

Instead, she took classes in the Government, Computer Science, History of Science, Philosophy, and Statistics departments to construct her own, College-approved curriculum on Technology, Policy, and Society. She graduated with a special concentration degree, completing her thesis on biases in machine learning algorithms used in the criminal justice system.

Now, the Government Department is using Guo’s academic plan as a prototype for its new Tech Science track, which explores issues associated with technology and society. A second track introduced this fall, Data Science, allows students to study the intersection between government and computer science by teaching them advanced quantitative methods used to solve societal problems.

The department hopes that the two new tracks will not only widen the scope of what its students can study, but provide something of an antidote to its diminished popularity.

In 2008, there were 477 Government concentrators at Harvard. That number has since dropped, stabilizing around 324 by 2017. This year saw 10 more students declare government than last year, according to Coordinator of Undergraduate Studies Karen Kaletka, and the department expects that number will further increase when students can declare joint concentrations with Government in the spring.

There is no denying, though, that the department is engaging fewer undergraduates than it once did. Several years ago, Harvard decreased the number of courses that Government faculty are required to teach from four a year to three a year in order to remain competitive with the offers other universities were making new faculty members. As a result, there are now fewer undergraduate courses taught by faculty members.

Jennifer L. Hochschild, chair of the Government Department, noted that the drop in the department’s concentrators is part of a nationwide trend.

“The social sciences and humanities within Harvard, but also outside Harvard, have more or less declined at least relatively, if not absolutely, in comparison with STEM fields,” Hochschild said.

“Statistics is rising, computer sciences is rising,” Hochschild said. “It is a fairly common phenomena around the country that political science is much less appealing to people.”

Now, the Government department is reacting to these shifts with a more cross-disciplinary program.

'A Better Way of Solving Problems'

Latanya A. Sweeney was an MIT-educated computer scientist before she began teaching in the Government Department at Harvard in 2012. In 2014, she spent a year as the Chief Technologist for the Federal Trade Commission, studying issues at the intersection of technology and society.

“It was really clear that I could get undergraduates to do this,” Sweeney said. Since then, she has taken dozens of students from her class Government 1430: “Data Science to Save the World” to Washington, D.C. so they can present their analyses of issues relating to government and technology to FTC regulators. Now she’s piloting the new Tech Science track, in which Gov 1430 is a required class.

Sweeney advised Guo’s thesis, and described her course of study as a major inspiration for the new program.

“She really was not only a pioneer for us, but also a model,” Sweeney said. “We had this prototype to look at, which was the curriculum that she had put together.”

The new Tech Science track draws on existing courses from the Computer Science, Statistics, Government, and Economics departments, and culminates with a practicum, in which students focus on identifying and solving a technology-society problem in lieu of writing a thesis.

“The way that my courses talked to each other very much fundamentally shaped the way that I think about problems now,” Guo said. “It’s really nice to have a curriculum and professors who are really genre-bending…they are basically taking the best of each field and supplanting them in order to think about what is a better way of solving problems.”

It is built around the “Foundations of Data Science” requirement, which is intended to give students advanced analytical skills. The requirement can be satisfied by taking Government 2000: “Quantitative Research Methodology,” along with Statistics 139: “Linear Models,” or by taking Computer Science 109: “Data Science 1: Intro to Data Science,” giving students greater flexibility within the program.

“The study of government will be benefited by people who really know how to take advantage of analyzing big data,” Hochschild said. “We provide the really interesting questions, the really deep and normative philosophical concerns, the power dynamics. They provide the lens through which to analyze those things, so intellectually it is an obviously good match.”

“We hope to pick off a few of those computer science concentrators, no question of that,” she added.

The decline in the number of Government concentrators is not due exclusively to students’ mass-migration to STEM fields. While some students, like Guo, are looking to combine the social sciences and STEM, others are seeking interdisciplinarity within the social sciences themselves.

Social Studies, for example, advertises itself in the Harvard Student Handbook as a field that promotes “an integration of the disciplines of history, political science, economics, sociology, and anthropology" — a mix that attracts dozens of students each year.

Hana Seita ’19, for example, is completing a joint concentration in Government and Near Eastern Languages and Civilizations.

“Gov is a very interdisciplinary concentration. It doesn’t sound like one, and that’s not what [the department] sells [itself] as, like social studies does,” she said. “But you need to learn the history of certain countries in order to understand the theory.”

The Government Department has not traditionally allowed students to count courses outside of the department toward their concentration requirements, which partially explains the appeal of joint concentrations.

“Often, people might petition for a course in American history to count for the American politics subfield, and I usually say no because it’s not from the point of view of political science,” Director of Undergraduate Studies Cheryl B. Welch said. “What you’re trying to say to someone who concentrates in Government or History or Sociology is that when they graduate, we are testifying that they have learned something about this discipline in this kind of disciplinary lens.”

Still, Welch said she is aware that there are gaps in the education it is providing for its concentrators.

“We don’t teach enough courses in this department on say, race and ethnicity in politics. We have people who specialize in that, but they have so many other demands on their time that they can’t teach these courses. One is our chair,” said Welch, referring to Hochschild.

“We are aware of that, and so we are more open to counting courses, say, in AAAS [African and African American Studies], as gov courses, which we have done more in the past couple years,” Welch said.

While Hochschild said the department as a whole is not shifting unilaterally to a more interdisciplinary approach, it is taking student demand for this into account in the hiring process.

“The students themselves want the boundaries of what we call government department courses to be more porous, more flexible, more open,” Hochschild said.

“A lot of the decline in political science departments came around the time that the big law schools had a decline in enrollment and the law market was falling through,” Blackwell said. “There is a long term reputation in political science departments in general, and this one in particular, that it is a good training to get a law degree. When fewer people are interested in going to law school, that is going to affect our enrollment.”

To Blackwell, the new programs signal that there are alternative benefits in choosing Government as a concentration.

“We wanted to signal... that there are concrete, real skills that you can get in a government department or political science department that are beyond just getting you ready to go to law school,” he said.

The current political climate may be affecting concentration numbers as well. Hochschild noted that while some may be drawn to the discipline because of its ability to create change, other students may pursue other pathways because of the negativity surrounding contemporary politics.

“I think some students are turned off of politics. It’s nasty, it’s zero sum, it’s not constructive,” Hochschild said. “Other students find it somewhat the opposite. It’s exciting, it’s important, it really matters.”

Kaletka maintains that the Government Department can still provide its students with a relevant education for this moment.

“As with anything, as the world changes we’re just trying to see how we can keep up with educating students about it,” she said.

For Sweeney, this means an increased emphasis on technology.

“Not only technology as a tool in that discipline, but also technology as a part of that study,” she said. “In many ways, I do see this school moving towards the technology science program, and that’s kind of cool. It’s a space to watch out for.”