How Student Concentrations Are Changing at Harvard

​With the deadline for sophomores to declare their fields of study fast approaching, The Crimson analyzed nine years of data to find out which concentrations are growing, which are shrinking, and which are holding steady.

With the deadline for sophomores to declare their fields of study fast approaching, The Crimson analyzed nine years of data to find out which concentrations are growing, which are shrinking, and which are holding steady.

Four major trends emerged. The number of students studying applied science, technology, engineering, and mathematics has mushroomed in recent years, while humanities concentrators are winnowing. The traditionally-large social science concentrations—Economics, Government, and Psychology—have fluctuated somewhat, but overall remained relatively stable over the years. So have the Pure Science concentrations, which include chemistry and physics.

For this article, The Crimson analyzed the enrollment statistics for each concentration—excluding joint concentrations—listed in the 2017-2018 Harvard College Handbook. Data on the number of concentrators as of December of the academic year from 2008 to 2016 is publicly available through the handbook website.

The rise of STEM is clear: Many applied STEM concentrations have experienced significant and consistent growth over the past eight years. Most dramatically, Statistics blossomed from just 17 concentrators in 2008 to 163 in 2016. Computer Science now counts 363 concentrators, up from 86 in 2008, and Applied Mathematics more than doubled in size over that time frame—from 101 to 279 students.

Kevin A. Rader, assistant director of undergraduate studies in Statistics, attributes some of this explosive growth to the fact that Statistics along with other applied STEM concentrations like Computer Science—are a “hot field, and hot job opportunity-wise” right now.

Rader also said that he thought the Statistics department was getting better at attracting concentrators through its introductory classes.

Computer Science 50: “Introduction to Computer Science I,” the College’s flagship CS course, regularly competes with the introductory economics course to enroll the most undergraduate concentrators.

Andrew Warren, director of undergraduate studies for the English Department, said that he thought the trend aligns with broader national trends, especially those experienced by peer institutions.

Howard E. Gardner, a professor at the Graduate School of Education, said that the decrease in humanities concentrators is due to undergraduates’ increased emphasis on career training.

“The humanities are going down because people are very job-oriented, either themselves or their parents, so they lack the will or the strength to say, ‘this is a once-in-a-lifetime opportunity to expand and try things out, even if they don’t lead to an immediate return on investment,” Gardner said.

Warren said the decrease in concentrators may be connected to the economic downturn in 2008, which he speculated may have led students to seek more remunerative careers.

“The common wisdom is that the decline in majors in English across the country is associated with economic trends,” Warren said.

Warren also said that part of the decline in English concentrators may be due to the decreasing societal salience of literature. “I think literature has less cultural capital than it had 40 or 50 years ago, or certainly 200 years ago,” Warren said.

Warren noted that although there may be a decrease in the number of those concentrating in English, many still take courses in the field: he said that last year, the English Department saw the most students enrolled in its classes since 2009.

The stalwart social science concentrations—Economics, Government and Psychology—saw some fluctuations over the past eight years, but generally decreased slightly in size. Economics, the largest concentration in the College, saw its peak of concentrators 2008 with 742, and its nadir in 2012 with 568. Since 2012, though, Economics has been steadily growing, counting 662 concentrators in 2016. 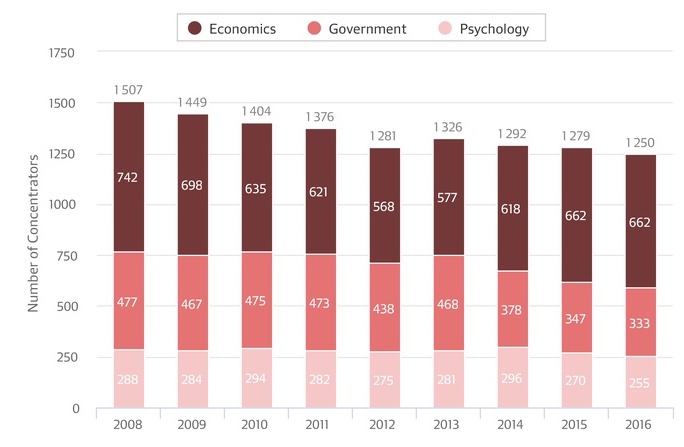 The number of Psychology concentrators has remained relatively stable in the time period, with its lows and highs of 255 and 296 concentrators in 2016 and 2014, respectively.

Thomas H. Baranga, Economics concentration advisor, said that Economics may consistently remain such a popular concentration because the College does not offer a formal business degree.

“I’m sure there’s a large section of the population that if they could do a business undergraduate concentration would do that and in the absence of that do Economics,” Baranga said.

He also added that students’ preliminary interest in Economics may arise from how commonly its principles are invoked in political discussions.

“Because both sides of the argument claim to find economic evidence to support their point of view, I’m sure that piques students interest to think, ‘they both can’t be right,’” Baranga said.

The Government Department has had a more pronounced decline in concentrators, decreasing almost every year from its 2008 rate of 477 concentrators to its 2016 rate of 333 concentrators.

The pure science concentrations, such as Chemistry and Physics, have attracted relatively stable numbers of concentrators since 2008: Chemistry went from 90 concentrators in 2008 to 80 in 2016, while Physics decreased from 79 concentrators to 61 in the same time frame.

Gardner said this could be attributed in part to the link between students who concentrate in pure sciences and those who plan to apply to medical school.

“The sciences are complicated because of medicine—if people want to go into medicine they have to go into some kind of science, probably biology or chemistry,” he said.

Harvard does not have a pure Biology concentration, but does have Molecular and Cellular Biology, which has overall has averaged a relatively constant number of students. It attracted 162 students in 2008 and 158 in 2016.